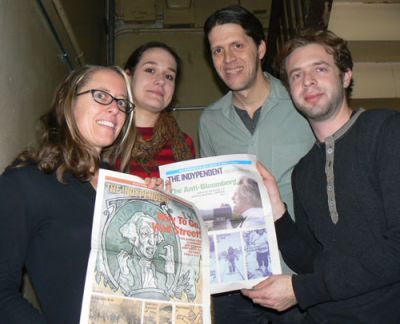 The Indypendent was honored with five awards from the New York Community Media Alliance, which recognizes excellence in New York City community and ethnic media publications for reporting, photography and design at its annual Ippies Award dinner Dec. 3.

Jacob Scheier and John Tarleton received first place for Best Feature Article for “The Anti-Bloomberg: Can I Get an Amen?” an article that explored Rev. Billy Talen’s quixotic mayoral campaign.

For their reporting on the strike at the Stella D’oro Biscuit Co. in the Bronx last spring, Sarah Secunda and Joel Cook were awarded third place for Best Article on Labor Issues. The Indypendent was the first publication to publish a feature-length article on the 11-month strike.

Second place for Best Photograph was given to Karen Yi for a photo of five children embracing their mother, a Senegalese immigrant who is fighting deportation because she fears her daughters will face possible genital mutilation if they are sent back to Senegal.

Design coordinators Anna Gold and Ryan Dunsmuir took home second place for Best Overall Design for Indypendent Issue 126, “Way to Go Wall Street!” Oct. 3, 2009. This issue included an illustrated essay, “How to Wreck the Economy,” by Arun Gupta and Frank Reynoso, which explained the causes of the 2008 financial collapse.

The Indypendent is produced by a largely volunteer team of reporters, photographers, editors, artists, designers and website managers. The Indypendent has won a total of 50 Ippies since 2003. Other publications that received awards included The Jewish Daily Forward, City Limits, ColorLines, El Diario and India Express.