Tear Open the Door of Heaven and
The Dirt Cheap Money Circus
By the Bread and Puppet Theater
Theater for the New City, Dec. 3-13 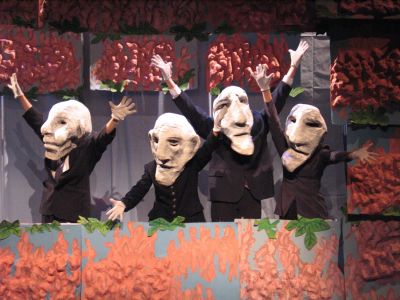 At the Radio City Music Hall Christmas Show uptown at Rockefeller Center, you can see Santa Claus, the Nativity, and the Rockettes, the world’s biggest precision chorus line.

And this weekend only, at the Theater for the New City in the East Village, you can see something slightly similar—well, similar to the extent that there is a Santa Claus. Instead of a Nativity scene, however, there is Karl Marx rising from his grave to announce, “Money is the visible deity.” And instead of the Rockettes, there are a pillow dance of women grieving for the children of Gaza, more than one dance on stilts, a Deforestation Dance to Create Parking for the Deforesters, and the Justice Department’s Illegality Dance.

It’s the annual New York appearance of the Bread and Puppet Theater, the venerable company founded as a street theater troupe in 1963 by dancer-artist Peter Schumann. If you’ve never seen them before, “deliriously anarchic circuses” describes both productions, Tear Open the Door of Heaven, nominally for adults, and The Dirt Cheap Money Circus, for “children of all ages.”

Tear Open the Door of Heaven, the one with the deforestation and grieving-mother dances, is a series of rites of the “brand-new papier-maché religion.” After a Christmas story prologue about a revolutionary savior—recited by Schumann, accompanying himself on the violin—six acts and six “dance interventions” depict the papier-maché God, his family, U.S. government officials, and mountain-top removal coal companies with music, posters, immense puppets, and people in masks and on stilts. 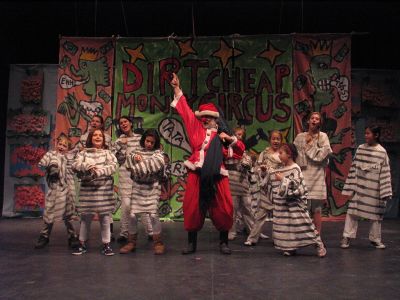 Santa and Karl Marx—along with the U.S. healthcare system, economic incentives, and all the animals of Old McDonald’s farm—turn up in the matinee production, The Dirt Cheap Money Circus, which is the shorter, rowdier, and more exuberant of the two. In Circus, Schumann and the troupe have created an hour-long extravaganza of slapstick to delight the younger half of the audience and text and lyric zingers that go over the kids’ heads but represent the political convictions of most of the adult audience. A nine-piece Dixieland band plays throughout, and at the climax, Schumann dances across the stage on 12-foot stilts, as a salute to the death-defying thrill side of every circus.

Bread and Puppet accomplishes all this with a small troupe imported from Vermont, where they now reside, and supplemented by a larger cast of local volunteers, who learn the show hours before their first performance. It’s an impressive collaboration, and the children in The Dirt Cheap Money Circus, who were obviously having the time of their lives, were especially impressive, most especially in the rambunctious “Old McDonald Had a Farm,” which ends with the bombing of the farm “to keep it safe from Iran.” Neither the young performers nor the youngest audience members seemed frightened.

To purchase tickets, visit Theater for the New City.