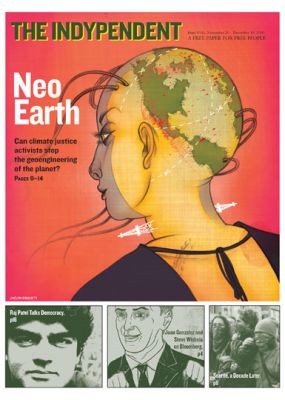 CHANGE IN THE WIND

Responses to “At the Energy Crossroads: The Battle for Wind Energy in the Heart of Appalachia,” Nov. 20:

It is sad to note that the wind-energy project at Coal River Mountain will not be realized due to a mining company. Today more and more states of the United States are looking to renewable energy like wind to meet their future energy needs. It is also the right direction to be heading considering world oil prices are shooting up and the pressure is mounting to decrease greenhouse gases.
—Rog Roster

Responses to “The Goodwill of Wal-Mart Women: A Review of To Serve God and Wal-Mart: The Making of Christian Free Enterprise,” Nov. 20:

I highly and seriously doubt Sam Walton formulated a plan to use “Christian white women as cheap labor,” as that definitely would have violated his own business principles and practices. I worked for Wal-Mart while putting myself through school and I told them to buzz off after four years. Why? It wasn’t the same Wal-Mart without Sam Walton at the helm. Anybody growing up in the Midwest that knows anything about Wal-Mart, its roots, or Sam Walton, would agree 100 percent.
—K.T.

The thinking that “if Sam were around that would not have happened” is prevalent amongst many, but utter hogwash. Sam Walton was a smart and rapacious capitalist, and he found a way to use Christianity to control his workforce. As the book states, Walton used his white female workforces’ belief in Christianity to get them to focus less on the economic matters of their job. Or at the very least, not raise trouble when it came to their, without a doubt, low wages and thin benefit packages.
—Tom B.