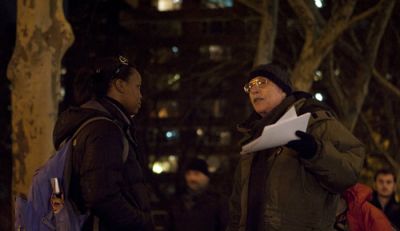 When President Obama finished his Dec. 1 address to the nation from West Point announcing his escalation of the conflict in Afghanistan, I headed to the northwest corner of Eighth Avenue and 24th Street to express my dissent.

Members of Chelsea Neighbors United to End the War and Mouths Wide Open, another antiwar group, handed out fliers encouraging people to contact the White House stating their opposition to the escalation. Drivers sped by honking their horns and flashing peace signs at the 25 of us as we held aloft placards with messages such as “No More Troops!: We Need an Exit Plan for Afghanistan and Money for Health Care Not War.”

Chelsea Neighbors United has gathered on this street corner every Tuesday from 6 p.m. to 7 p.m. since May 2005. It began as a group opposed to the war in Iraq, but has evolved to include the wars in Afghanistan and Pakistan as well.

On this night, we didn’t need a poll to let us know what the public was thinking about Obama’s speech. There was frustration, disappointment and fear expressed by those passing by. They were thankful that we were there, and a few stopped and joined us. Some still expressed the idea that you had to support the president, but fewer than before the speech.

One young woman rushed up to us and in an angry voice said, “I’m not a political person, but I voted for Obama because I believed that he wanted to end the war.” She said that she was “sickened by Obama’s speech and felt betrayed.”

It was the 238th consecutive week that we had held a “stand-up,” and as usual, it was a unique experience; you can never anticipate what will happen. One week, it was a neighborhood kid heading to Iraq, another week it was a soldier just arrived home who stopped to speak with us. We have met the mother of a soldier in Afghanistan and the spouse of a Marine in Iraq describing her anguish. We have met people from Italy, England and Jordan telling us how happy they are to see Americans protesting the war. Once, we had the the woman who works in the neighborhood tell us that she had seen our vigil for years and decided this is the week that she would finally join us.

The main thing that I have learned standing up each week is that you can’t change anyone’s mind. Only they can do that. We can be there as a reminder for those who have forgotten their own rage against the war, as an alternative for those mired in inaction, and a place to come and be counted. It takes time to make peace one person at a time.

Chelsea Neighbors United is a fluid group. We are made up of Chelsea residents and friends who believed from the beginning that it was important to oppose the war by having an ongoing presence in our own neighborhood. When we began, we expressed our commitment to be there each week until the war is over and the troops are safely home. Each week, we hand out our newsletter that includes a different signed column by one of our members on a topic related to war.

Our group is a mix of long-time activists and newcomers of all ages. We sometimes have had three generations in the same family standing up against the war. While we have participated in larger actions including citywide marches and riding to Washington, D.C., for national demonstrations, the weekly stand-up is the ongoing work of the group. Big antiwar mobilizations provide a jolt of excitement, but it’s crucial that we find ways to channel that energy on an ongoing basis. As we approach yet another winter, Chelsea Neighbors United remains committed to standing on the street corner with our neighbors for as long as necessary.

Now is not the time to be silent.

Chuck Zlatkin is a founding member of Chelsea Neighbors United to End the War and the legislative and political director of the NY Area Metro Postal Union. He has lived in Chelsea since 1971. For more information, see chelseaneighborsunited.org.