They’re singing “When the Idle Poor Become the Idle Rich” again on Broadway, which is good news for those of us who like our pop culture liberally seasoned with politics. And if Finian’s Rainbow is too musical—or too expensive, or too sold-out—actor-playwright Jim Brochu is portraying legendary actor and blacklist victim Zero Mostel just a few blocks away in Zero Hour.

A “left-leaning Broadway musical” didn’t use to sound impossible, or even unlikely. George and Ira Gershwin and Morrie Ryskind penned the political satire Of Thee I Sing in 1931. In 1937, working for the Federal Theater Project, Marc Blitzstein put such a strong pro-union, anti-capitalism message into The Cradle Will Rock that the feds pulled the plug on it. And in 1947, with Finian’s Rainbow, E.Y. Harburg, Fred Saidy and Burton Lane put together a Broadway hit that combined socialist and anti-racist ideals, deliriously clever lyrics and a rollicking score of eminently singable tunes. The original 1947 production ran for 725 performances and gave to the U.S. songbook the standards “Look to the Rainbow,” “How Are Things in Glocca Morra,” “When I’m Not Near the Girl I Love (I Love the Girl I’m Near),” “If This Isn’t Love” and “Old Devil Moon.” 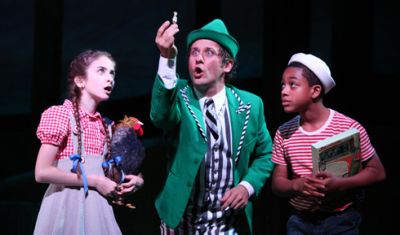 The rather complicated story line follows Irish immigrant Finian McLonergan, who has stolen a leprechaun’s pot of gold; the leprechaun, who has followed him to the Southern state of Missitucky to get the gold back; McLonergan’s daughter Sharon’s and her U.S. romance; Missitucky’s greedy, land-grabbing, bigoted U.S. senator; and the racially integrated community whose land the senator is trying to acquire. The community makes up the chorus, which was one of the first integrated choruses on Broadway.

This season’s exuberant revival of Rainbow at Broadway’s St. James Theater cheekily accepts the sillier aspects of the story—to the point of creating some magical special effects around the pot of gold—and does more than justice to the glorious music. (Kate Baldwin is the best singer this reviewer has ever heard as Sharon.) As to the politics—well, Senator Rawkins still discovers what life is like for African-Americans when a wish made near the hidden crock of gold turns him temporarily Black. The integrated community still saves their land, which they share in a—gulp!—socialist kind of way. And the company still sings, in “When the Idle Poor Become the Idle Rich”:

“When we all have ermine and plastic teeth
How will we determine who’s who underneath?
And when all your neighbors are upper class
You won’t know your Joneses from your As-
tors.”

E.Y. “Yip” Harburg wrote the lyrics to “April in Paris,” “It’s Only a Paper Moon,” the Depression anthem, “Brother, Can You Spare a Dime?” and The Wizard of Oz, including “Over the Rainbow.” An unabashed and lifelong socialist, he was blacklisted from movie work not long after Finian’s Rainbow, when the U.S. government began hunting down Communists. There wasn’t another “Over the Rainbow,” but Harburg was able to keep working on Broadway.

Actor-comic Zero Mostel wasn’t so lucky. At 37, he was doing stand-up in New York and Los Angeles’ top venues, acting in Broadway comedies, and appearing in movies. But in 1952, a “friendly” witness named Martin Berkeley, whom Mostel denied even knowing, identified him as a Communist to the House Committee on Un-American Activities (HUAC). His career dried up, although he himself wasn’t subpoenaed by HUAC until 1955. The blacklist left him unemployed for five crucial years, until he delivered an award-winning comeback performance as Leopold Bloom in an off-Broadway adaptation of James Joyce’s Ulysses. He went on to new successes in the original productions of A Funny Thing Happened on the Way to the Forum and Fiddler on the Roof and Mel Brooks’ original The Producers. He died in 1977. 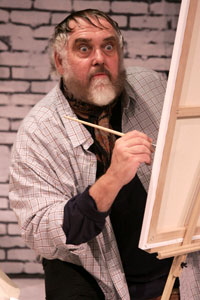 Now Jim Brochu is bringing Mostel’s ghost back to his old stomping grounds, in the theater at St. Clement’s Church just west of Broadway. Set some time during the last year of Mostel’s life, the one-person show purports to be Mostel’s end of an interview taking place in his Manhattan studio, where he painted during the blacklist years and continued to paint for the rest of his life. He was a painter before he was a performer, he says—“I just did comedy to buy more paint.”

Briskly directed by actor Piper Laurie (herself a Hollywood legend), he is by turns charming, angry and hilariously funny as he relates his life story: His early career as an aspiring painter, his two marriages, his career as a comedian and an actor—and, of course, the red hunt and the blacklist. “What did they think we were doing?” he asks—“Giving acting secrets to the enemy?” He describes Martin Berkeley, the man who named him and another 159 people, as “the Babe Ruth of stool pigeons.” He talk about choreographer and director Jerome Robbins, whom Mostel hated for  “naming names,” yet who worked with him in Forum and directed him in Fiddler. He talks, too, about friends who lost their whole careers—and about others who lost their lives.

Brochu is a great bear of a man, physically not unlike Mostel himself. He can’t bring Mostel back to life, of course—no one could—but he comes as close as possible, and in the course of the effort, animates a moment in history that we need to remember.