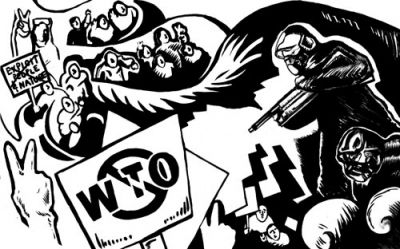 Social theory grows out of the sediment left behind by social movements, systematizing the advances made in practice at the level of theory. Ten years after Seattle, the global justice movement is beginning to bear intellectual fruit. David Graeber’s new tome, Direct Action: An Ethnography, is the most impressive attempt yet to understand the politics and promise of the global justice movement.

Direct Action can be roughly divided into three sections. The first four chapters consist of a description of planning meetings for the 2001 protest against the proposed Free Trade Agreement of the Americas (FTAA) in Quebec City and of the action itself, expanded from Graeber’s notes and with the narrative flow of a novel. The next five chapters consist of observational essays on topics such as “activist culture,” “representation” and “meetings.” The final chapter, “Imagination,” is a theoretical reflection on the ethnography that precedes it.

In Direct Action, Graeber fleshes out an argument that he has made elsewhere: The ideology of the alter-globalization movement was contained in its practice. What seemed to outside observers like a chaotic mish-mash of messages at protests staged by Marxist groups was actually a conscious choice to allow a diversity of viewpoints to be expressed. And what seemed like a tedious attention to meeting process was the result of a commitment to direct democracy and rejection of a politics of representation in favor of a politics of participation. Instead of focusing solely, or even largely, on ends, the global justice movement focused on means, attempting to live out its ideals in the present and sneak moments of liberation on the sly.

Graeber operates here as a participant-scholar who tries to efface — transcend? — the distinction between these two roles. The subtitle “An Ethnography” is a shout-out to Direct Action’s grounding in Graeber’s training as an anthropologist, but he is writing from inside the meetings and imagination of the global justice movement and not as a detached observer. While Graeber worked in New Haven as a professor at Yale University (until he was fired in 2005), in New York he was in the thick of the alter-globalization movement as a spokesperson for the Direct Action Network.

Graeber’s anthropological training and position as a participant allows him to go further than any previous writer in understanding the global justice movement. He focuses on meeting dynamics and organizing practices almost to the exclusion of any analysis of the ideology of the organizations or participants in the global justice movement. To the extent that he tackles the subject, he categorizes most members of the movement as “small a anarchists,” steeped in anarchist principles but with little connection to historical traditions of anarchist struggle or allegiance to any particular school of anarchism.

While anarchists formed the avant-garde of the global justice movement, they generally did not try to convert other protesters and sympathizers to an explicit belief system. Instead of pushing a party line, they spread practices, advocating the adoption of affinity groups, consensus-based decision-making and spokescouncils. Graeber argues that the Direct Action Network, the most significant organization of the global justice movement, while short-lived, was extraordinarily successful in diffusing a directly democratic model of organizing.

The global justice movement ground to a halt after 9/11, unable to maintain its momentum in the context of heightened state repression and the failure of the non-strategy of staging protests at each successive trade summit. However, Graeber reminds the reader of how much it did accomplish.

In a few short years following Seattle, the global justice movement not only brought protest back into the public eye in the global North, it shattered the neoliberal consensus to which Margaret Thatcher had declared there was no alternative. Seattle and what followed revealed the possibilities of alternative ways of ordering the world that had been rendered invisible during the short-lived “end of history.”

Direct Action shows us that not only is another world possible, but, for all its faults, the practice of the global justice movement helps illustrate what this world might look like.

To Read Matt Wasserman’s review of The Battle of the Story of the “Battle of Seattle” click here.