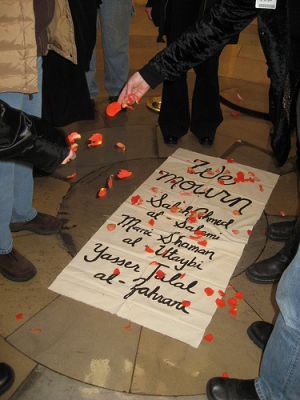 In a dramatic protest, 42 activists with Witness Against Torture were arrested yesterday afternoon at the U.S. Capitol.  The protest comes on the eve of the since-voided deadline President Obama had set for closing the prison camp at Guantánamo.

Those arrested on the Capitol steps held banners reading “Broken Promises, Broken Laws, Broken Lives.”  Inside the Capitol, 14 activists performed a “memorial service” for the three men whose deaths at Guantánamo in 2006 were initially reported as suicides and callously described as “acts of asymmetrical warfare” by military officials. New reports provide strong evidence that the men may have been tortured to death at a CIA secret prison in Guantánamo.

The ceremony brought the names of the men — Salah Ahmed Al-Salami, Mani Shaman Al-Utaybi and Yasser Talal Al-Zahrani — into the Capitol Rotunda, where deceased presidents have lay in state. “We perform this ceremony to recognize the humanity of those whose lives have been broken by our government’s policies of torture and indefinite detention,” says Jerica Arents of Chicago, Illinois, one of those arrested in the Capitol.

Most of the 42 arrested at the Capitol did not carry identification, taking instead the names of men at Guantánamo through arrest and processing. “Taking the name of Adnan Farhan Abdul Latif is a necessary and real way of bringing his story to Congress,” says Joshua Brollier, a co-coordinator with Voices for Creative Nonviolence in Chicago, Illinois. “Adnan was tortured and continues to be held after eight years without charge or trial. It boggles the mind and breaks the heart. It’s time for Congress and the Obama administration to make and fulfill a plan for his release.” Brollier and others from Voices will continue in Washington through Feb. 2, participating in the Peaceable Assembly Campaign to pressure Obama administration and Congress to explore alternatives to U.S. militarism.

The actions at the Capitol followed a march of “Guantánamo prisoners” dressed in orange jumpsuits and black hoods that began at the White House and stopped at the Supreme Court before going to Capitol grounds, home to the U.S. Congress.

“Congress has played a horrible role in refusing to check the power of the president and in supporting torture,” commented Matt Daloisio of New York City, a Witness Against Torture organizer. “But it was important to pass by all of the government institutions that have failed to uphold justice and protect the rule of law.”

Members of Witness Against Torture began a Fast for Justice on Jan. 11— the date in 2002 when the first men were brought to Guantánamo under the Bush administration’s “war on terror.” One-hundred fifty people from around the country joined the 12 day fast, which will end on Jan. 22, the promised day for Guantánamo’s closure.

“We were so hopeful last year,” says Christine Gaunt, a grandmother and third generation farmer from Grinnell, Iowa, who was arrested at the Capitol. “But Obama has broken his promise to close Guantánamo. I am acting today because I am horrified and ashamed that this illegal prison continues to exist, and that those responsible for torture have not been held to account. I am using my body to demand that my government stop the insanity of torture and illegal detention.”

Witness Against Torture is a grassroots movement that came into being in Dec. 2005 when 24 activists walked through Cuba to the Guantánamo base to condemn the prison camp and torture policies. Since then, it has engaged in public education, community outreach, and non-violent direct action.
For updates, visit Witness Against Torture’s website.