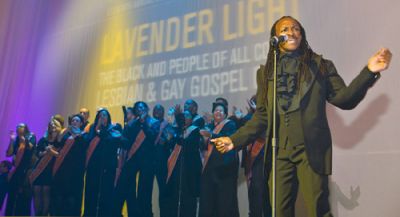 How would you celebrate 30 years of presenting politics with a musical beat? Well, Peoples’ Voice Café has the answer — host a concert with the New York Society for Ethical Culture (NYSEC) featuring multicultural lesbian and gay gospel choir Lavender Light and roots-rock duo emma’s revolution.

The concert, which is organized by the People’s Music Network, a group of activist musicians who helped birth the Peoples’ Voice Café back in 1979, will take place Jan. 29.

Lavender Light fires up audiences with songs in the black gospel tradition ranging from old-time gospel favorites to spirituals and revamped pop anthems. The ensemble, whose high-energy performances have been getting audiences out of their seats since 1985, is the first nonchurch- affiliated lesbian, gay, bisexual and transgender gospel choir in the world. emma’s revolution — musical and life partners Pat Humphries and Sandy O — travel the country and the world singing to energize activists and mobilize the politically inactive.

The concert will also feature music from artists representing the diverse traditions of the People’s Music Network, from Nueva Cancion and street poetry to topical songwriting and storytelling.