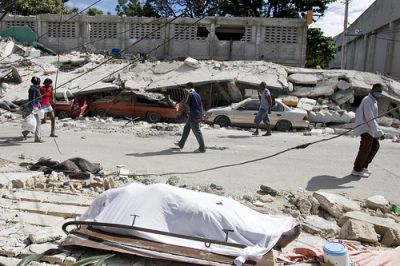 There is a great risk that one of the largest relief operations in history will be similar in nature to the tsunami relief efforts in 2004, unless a radically different approach to a reconstruction model is adopted.  Haiti was partially destroyed by an earthquake measuring 7 on the Richter scale. We have all shed tears and the media, as they bombard us with apocalyptic images, report on financial pledges generous States have made. We know that Haiti needs to be rebuilt, this country hard-hit by poverty and “its curse.” Therefore, at the moment, the focus is on Haiti . Comments fail to look beyond the terrible earthquake. We are told that it is one of the poorest countries in the world without any explanations provided.  We are led to believe that poverty just happened, that it is a situation beyond remedy: “Haiti is an accursed land.”

There is no doubt that this recent natural disaster has led to considerable and unforeseeable material and human damage. Emergency aid is therefore needed and everyone can agree on this point. However, this earthquake was not the root cause of poverty and squalor. This country needs to be rebuilt because it has been stripped of its means to rebuild itself. Haiti is neither a free nor a sovereign country. In recent years, its domestic policy choices have been made by a government constantly under pressure by orders coming from outside the country and by maneuvers carried out by the local elites.

At best, Haiti is described as a violent, poor and repressive country. There are few comments remembering the independence gained in 1804, after a hard-fought struggle against Napoleon’s French armies. Rather than focusing on their humane approach and their fight for Human Rights, savagery and violence are the traits attributed to Haitians. Eduardo Galeano talks about “the white curse”:

“At the border where the Dominican Republic ends and Haiti begins, there is a large sign with the following warning:  The bad path. On the other side, it is black hell. Blood and hunger, poverty, plagues.”

It is therefore necessary to look back at the struggle for emancipation waged by the Haitian population, because in retaliation against this double-faceted revolution, both anti-slavery and anti-colonial in nature, the country inherited the ransom France demanded for independence, amounting to 150 million francs (that is, France’s annual budget at the time). In 1825, France decided that “The current inhabitants of the French part of Santo Domingo will pay into France’s Federal deposit and consignment offices, the sum of one hundred and fifty million francs, to be paid in five installments, year after year, with the first term due 31 December 1825. The money will be used to compensate the former colonists who will demand compensation.” That is equivalent to approximately $21 billion nowadays. From the outset Haiti had to pay a very high price. Debt became the neo-colonial instrument used to maintain access to this country’s many natural resources.

The payment of this ransom is therefore the founding element of the Haitian State. In legal terms, this means that it was contracted by a despotic regime and this contract was used against the interests of the people. First France, then the United States, whose sphere of influence expanded to Haiti from 1915, are entirely responsible for this.

Now, whilst it would have been possible to face up to their painful responsibilities of the past in 2004, the Régis Debray Commission report preferred to scrap the idea of repaying this sum on the pretext that it was “legally unfounded” and that this action would open a “Pandora’s box.” The Haitian government’s request was rejected by France: no compensation was warranted. Moreover, France does not recognize the role it played in the shameful present it gave to the dictator in exile “Baby Doc” Duvalier, by granting him political refugee status and thus, immunity.

The Duvaliers’ rule began with the help of the United States in 1957: it lasted till 1986, when the son “Baby Doc” was thrown out of power by a popular uprising. The violent dictatorship, broadly supported by Western countries, ravaged the country for almost 30 years. It was marked by an exponential growth in its debt. Between 1957 and 1986, foreign debt had multiplied by 17.5. At the time Duvalier fled, it amounted to $750 million. It then rose, through interest and penalties, to over $1,884 million. This debt, far from serving the interests of the impoverished population, was actually aimed at enriching the ruling regime: it is therefore an odious debt. 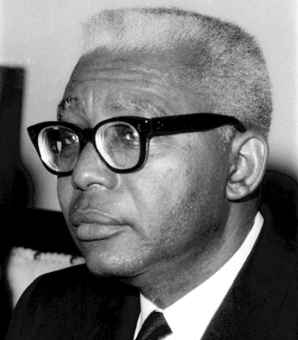 A recent inquiry reveals that the Duvalier family’s personal wealth (well protected by their western bank accounts) amounted to $900 million, or in other words, a greater sum than the total debt of the country at the time “Baby Doc” fled. A trial is currently taking place before the Swiss courts for the restitution of goods and assets to the state of Haiti, embezzled during the Duvalier dictatorship. For the moment, these assets remain frozen by the Swiss bank UBS, which has put forward unacceptable conditions for the restitution of these funds.

Jean-Baptiste Aristide, by contrast, was enthusiastically elected, however he was soon accused of corruption, before being put back in office as a United States puppet and finally ousted by the U.S. army. So Aristide, unfortunately, is not innocent in relation to debt and embezzlement of funds. Furthermore, according to the World Bank, between 1995 and 2001, the debt service, that is to say capital and the reimbursed interests, had reached the considerable sum of $321 million.

All current financial aid announced following the earthquake is already lost to the debt repayment!

According to the latest estimates, over 80 percent of Haiti’s foreign debt is with the World Bank and the Inter-American Development Bank (IBD) with up to 40 percent each. Under their leadership, the government applied “structural adjustment plans,” now disguised as “Poverty Reduction Strategy Papers” (PRSP). In exchange for contracting more loans, Haiti has been given some insignificant amount of debt relief or cancellations, which cast the creditors in a positive light. The Heavily Indebted Poor Countries initiative (HIPC), for which Haiti was accepted, is a typical odious-debt laundering maneuver, as was the case with the Democratic Republic of Congo. Odious debt is replaced by new so-called legitimate loans. The
Committee for the Abolition of Third World Debt (CADTM) views these new loans as a key part of odious debt as they are used to pay off the old debt. The offense continues to be committed.

In 2006, when the IMF, the World Bank and the Paris Club accepted that the HIPC initiative include Haiti, the whole stock of public foreign debt totaled $1,337 million. At the time of completion of the initiative (in June 2009), the debt totaled $1,884 million. The cancellation of a debt totaling $1,200 million was decided so as to “make the debt bearable.” Meanwhile, the structural adjustment plans wreaked havoc, especially in the agricultural sector, the effects of which reached its peak at the time of the 2008 food crisis. Haitian peasant farming suffered from U.S. agricultural goods dumping. According to a recent CADTM document:

“The macro-economic policies supported by Washington, the U.N., the IMF and the World Bank do not concern themselves at all with the need to develop and protect domestic markets. The only concern of their policies is to produce at the lowest price for exportation on the global markets.”

It is therefore a scandal to hear the IMF say that they are, “ready to play their role with the appropriate support in these areas of competence.”

As stated in the recent international appeal, “Haiti calls for solidarity and the respect for the sovereignty of the people”:

“Together with many Haitian organizations, over recent years we have denounced the military occupation of the country by United Nations (U.N.) troops and the impacts of the domination imposed via the mechanisms of debt, free trade, the looting of its natural habitat and the invasion of transnational interests. The vulnerability of the country to natural tragedies – provoked to a large extent by the environmental devastation, the non-existence of basic infrastructure, and the systematic weakening of the state’s capacity to act – should not be seen as something disconnected from these policies, which have historically undermined the sovereignty of the people.”

Now is the time for the governments that form part of the United Nations Stabilization Mission in Haiti, the U.N. and in particular France and the United States and the governments of Latin America, to revise this action that is contrary to the basic needs of the Haitian people. We demand of those governments and international organizations that they substitute the military occupation with a true mission of solidarity, and that they take action to ensure the urgent cancellation of the debt that is still being collected of Haiti.

Irrespective of the debt issue, it is feared that the aid will take the same form as that provided after the tsunami hit several Asian countries at the end of December 2004  (Sri Lanka, Indonesia, India, Bangladesh) or after hurricane Jeanne hit Haiti in 2004. Promises were not kept and a large part of the funds were used to line the pockets of foreign or local elites. The majority of these “generous donations” came from the creditor countries.

Rather than giving donations, it would be preferable that they cancel Haiti’s debt: totally, unconditionally and immediately.  Can we really speak of donations when we know that this most of this money will either be used to repay foreign debt or to implement “national development projects” decided on the basis of the interests of these creditors or local elites? It is clear that without these immediate donations, it will not be possible to secure repayment of this debt, at least half of which corresponds to odious debt. The major international conferences, whether G8 or G20 expanded to include IFIs, will not produce any progress whatsoever in terms of Haiti ’s development rather, they will rebuild instruments to help them secure neo-colonial control of the country. The purpose is ensuring that debt repayments continue, the basis for submission, as has been the case since the recent debt relief initiatives.

On the contrary, in order for Haiti to rebuild itself in dignity, national sovereignty is the fundamental issue. A total and unconditional debt cancellation for Haiti must be the first step towards a more general course of action. A new alternative development model to the IFIs and the Economic Partnership Agreements (EPA signed in December 2009, the Hope II Accord), is necessary and urgent. The most industrialized countries, which have systematically exploited Haiti, beginning with France and the United States, must pay compensation towards a fund aimed at financing the reconstruction of the country, controlled by the Haitian people’s organizations.

Translated by Francesca Denley in collaboration with Marie Lagatta.

Eric Toussaint is president of CADTM Belgium (Committee for the Abolition of Third World Debt). His books include The World Bank, A Critical Primer (Pluto Press, 2007) and Your Money or Your Life, The Tyranny of Global Finance (Haymarket, 2005). Sophie Perchellet is vice-president of CADTM France.