Scott Brown’s victory in Massachusetts is the latest object of media frenzy. There is no shortage of Democratic allies claiming the uniqueness of the election. There is no shortage of Republican fellow travelers sure that all things Obama are being repudiated. No one seems interested in the obvious. Obama and his advisors should be able to understand how a fairly obscure state senator is propelled into the national spotlight by angry voters seeking change. 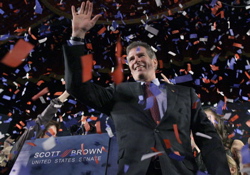 Scott Brown’s media coverage was strangely similar to Obama’s, if you swap the phrases Massachusetts Conservative with African-American. I am not equating the history of racism to the higher number of registered Democrats in the Commonwealth. Just look at the headlines and invert the phrases. A shocked media should be able to grasp how candidates with the best stories find themselves sailing forward with the wind of powerful commentary filling their sails. After all, Obama was the better story in 2008 and this helped him enormously. We have all seen that the public is uncomfortable with female party stalwarts. Angry, cornered people are hard to predict and easily roused by anger. This is the real story. How did a huge lead evaporate? Why did so many independents in Massachusetts vote for Obama and Brown? The public is angry, struggling and places little faith in the parties and their promises.

It has been a year since the election of Barack Obama. We have suffered over two years of rising unemployment and surging foreclosure. Asset markets have staged a potent recovery since March 2009. Leading voices of economic wisdom — nearly all unchanged from 2007 — become ever more confident in a recovery. Rebound is the state of affairs in asset markets and the state of mind for experts. The majority of Americans face a very different set of pressures and realities. Their state of mind is volatile and driven by rising frustration.

The pace of employment decline has fallen. We have seen overall economic performance, as measured by gross domestic product (GDP), increase. We have not seen declines in personal bankruptcy filings. Foreclosures, delinquencies and defaults are rising. Increasingly, late and missed mortgage payments are concentrated amongst prime mortgage borrowers. Nearly every month in 2009, less consumer credit was available to American households. Soaring budget deficits and inadequate assistance define the last few years for many, many American voters. Across 2008 these voters turned and vented their anger at the Republican Party. For the last year Democratic majorities prevailed in the House and Senate alongside a popular Democratic president. Very, very little was delivered to the bottom 60 percent of the income pyramid.

The last year was defined by suffering for millions of American families. Much of this suffering can’t possibly be seen as primarily Obama’s fault. However, relief has not arrived. The same anger that swept Obama and many Democrats into office now threatens them. It would have been worse. We inherited these problems. These truths are fleeting as a substitute for relief. Democratic majorities were not able to deliver meaningful, material improvement in the lives of the rattled and struggling majority of Americans. Of course a year is a short time and things might well be worse with the exception of some of the laws and policies of last year. This does not motivate voters, calm fears, or salve deep economic wounds. If this lesson is not learned and acted upon, Massachusetts will be the start of major trouble for Democrats and our President.