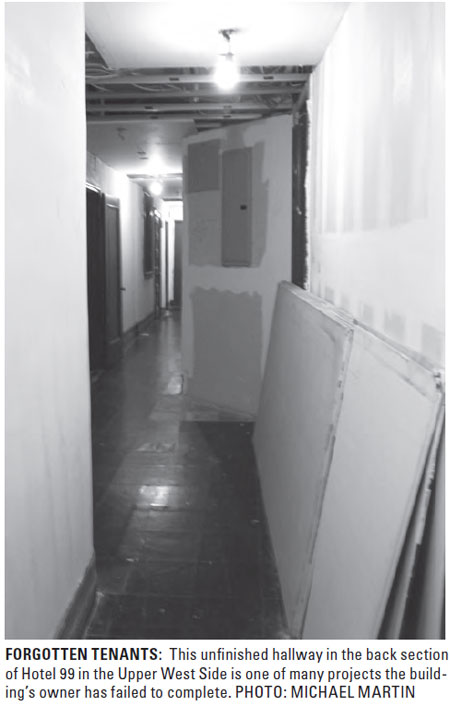 While Oscar Tenorio lives in a one-room apartment on the Upper West Side, his living situation is quite different from his more affluent neighbors. He shares bathroom and kitchen facilities with other tenants. In the hallways, wires and pipes hang from the ceilings, and crushed bedbugs dot the walls. There are holes in the walls and floors and bare light bulbs illuminate the hallways.

Hotel 99 is a Single Resident Occupancy (SRO) building that was illegally converted into a hotel. Its SRO status means that the building is rent stabilized and intended for low-income New Yorkers, which only offers management companies a fraction of the profits that can be made by charging tourists a nightly fee of up to $179.

Vacated late last year, Hotel 99’s closure, along with a handful of other hotels clustered in the Upper West Side, is part of the most recent crackdown on illegal hotels in the city.

According to Hotel 99’s partial vacate notice, which was issued by the Mayor’s Office of Special Enforcement, the hotel portion of the building was closed down for fire code and other violations.

While the hotel section of the building is still empty, it remains to be seen for how long its doors will stay closed. There is currently no law against illegal hotels in New York City, and the city is often limited to fining hotels for violating fire, occupancy and zoning codes in an effort to keeping these establishments in check. Building owners caught operating illegal hotels in buildings zoned for residential use are only fined $800, what Yarrow Willman-Cole, a tenant organizer with the Goddard Riverside SRO Project, calls a “cost of operation.”

“It’s a legal gray area and enforcement is happening specifically where there are safety concerns, but there are other issues that can be considered [in trying to shut illegal hotels down], such as zoning, permitted use in the certificate of occupancy and the fire code,” William-Cole said.

Hotel 99 is just one part of a complex web of illegal hotels throughout the city. According to the West Side Neighborhood Alliance, a nonprofit group that seeks to provide safe and affordable housing, as of 2009 there were 270 illegal hotels across Manhattan, Queens and Brooklyn.

Tenorio, who was asked by building management to move to the back of the building to make way for the construction of the hotel, has, like many of the other residents, not seen the hotel section of the building, which features lapis-tile hallways and cream-colored walls.

The original construction permit that Ronald Oved, the building’s coowner, obtained in 2009 indicated that he would refurbish the public areas of the SRO building. Instead, Oved was constructing a hotel. Oved declined to comment for this article.

In addition to being subjected to substandard living conditions and waiting months for repairs, SRO tenants at Hotel 99 are prohibited from installing air conditioners in their rooms, having guests and bringing alcoholic beverages into the building.

Hipolito Sierra, one the building’s tenants, has waited several months for repairs and improved sanitation in the residential half of the building. Sierra last spoke to Peter Cabrera, the building manager, two months ago. “I think [Cabrera] prefers the tourists, because he makes money. But with [tenants] he doesn’t care about where they have to live,” Sierra said. Cabrera also declined to comment for this article.

Willman-Cole is organizing Hotel 99 tenants to participate in a lawsuit for repairs. Though she believes that management will eventually repair the residential section, a lawsuit will help expedite the process and empower tenants, Willman-Cole said. She declined to discuss the details of the lawsuit, as well as the number of tenants participating, due to fear of negatively affecting the outcome of the lawsuit.

Many tenants are afraid to confront landlords. Some are full families, violating codes allowing only two tenants per SRO and barring children. Others are undocumented and fear owners will call Immigration Services in retaliation.

Tenorio has joined a slowly growing number of tenants who have signed on to the lawsuit and, while he is undocumented, is glad to represent other undocumented residents who are reluctant to come forward.

Councilmember Gale Brewer (D-Manhattan) has been working to increase the fine and clarify the city’s stance against illegal hotels. “We were not able to change that law [at the city level], because we have to go through the state,” Brewer said, “It has been two years.”

Bob Kalin, tenant organizer from the Housing Conservation Coordinators (HCC), which also funds the West Side Neighborhood Alliance, explained that many in the New York City tourism industry oppose legislation against illegal hotels because of some “old, traditional hotels that exist in New York City that aren’t strictly in compliance with some laws.” Kalin said the HCC is still “plugging away” toward legislation.

The HCC currently has a group of tenants and elected officials — including State Senator Tom Duane, Speaker Christine Quinn and Brewer — working to address the issue of illegal hotels in New York City. While converting illegal hotels into affordable housing is definitely a goal, this effort will take a significant amount of effort from the mayor’s office, city council and the state legislature, said Jackie Del Valle, HCC’s organizing director.

While the future of legislation banning illegal hotels is uncertain, Del Valle said housing advocates expect that there will be a move towards better enforcement and clearer legislation on illegal hotels as the state legislature resumes this month.