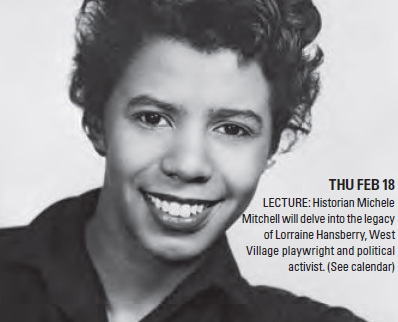 WED FEB 3
4pm-6pm • Free
MARCH: LIVING WAGE. The Retail Action
Project is organizing a march against
low wages and wage theft in SoHo.
Workers at Shoe Mania are suing the
company for millions in unpaid wages,
and the Mystique Boutique chain, which
owns Amsterdam Boutique, is under
investigation for alleged minimum wage
and overtime violations.
Meet at Amsterdam Boutique,
454 Broadway 347-583-0490
retailactionproject@gmail.com

6:30pm-8:30pm • Free
SCREENING: THE POPE’S TOILET. A
small-time smuggler tries to capitalize
on the pope’s visit to the town of Melo,
Uruguay, by building a toilet in front of his
house and charging people to use it. The
film will be preceded by Our Lady Queen
of Harlem, a 17-minute documentary
about a group of women in East Harlem
who hold their own sidewalk services
after their church is shut down by the
archdiocese. Reserve tickets online.
El Café, El Museo del Barrio,
1230 Fifth Ave
212-831-7272 • elmuseo.org

7pm • Free
FILM: MRS. GOUNDO’S DAUGHTER. The
International Black Film Festival presents
a documentary about the efforts of a
West African woman in Philadelphia to
secure asylum in the United States in
order to save her two-year-old daughter
from a return to Mali and the senseless
barbarism of genital mutilation.
New York Society for Ethical Culture,
2 W 64th St • 212-874-5210 • nysec.org

7pm • Free
READING: GUADALUPE IN NEW YORK.
Dr. Alyshia Galvez will discuss the efforts
of undocumented immigrants to receive
citizenship. Galvez is the author of
Guadalupe in New York: Devotion and the
Struggle for Citizenship, which explores
religion and politics in the immigrationreform
movement.
Bluestockings, 172 Allen St
212-777-6028 • bluestockings.com

THURS FEB 11
6:30pm-8:30pm • Free
FILM/DISCUSSION: RIGHT TO THE CITY
MAKES DEMANDS. The Right to the City
Alliance has brought together dozens of
community groups from throughout the
five boroughs to visualize a better city
and flesh out demands and build a movement
to make it happen. Discussion led by
CUNY professors David Harvey, author
of Social Justice and the City, and Peter
Marcuse, author of Searching for the
Just City: Debates in Urban Theory and
Practice. Film by Paper Tiger Television.
365 Fifth Ave, Proshansky Auditorium
646-459-3014 • righttothecity.org

TUE FEB 23
7pm-8pm • Free
DISCUSSION: PULITZER AND MURDOCH.
James McGrath Morris and
Michael Wolff will discuss the lives of
Joseph Pulitzer and Rupert Murdoch.
Morris is the author of Pulitzer: A Life in
Politics, Print and Power, and Wolff is
the author of The Man Who Owns the
News: Inside the Secret World of Rupert
Murdoch.
Strand Book Store, 828 Broadway
212-473-1452 • strandbooks.com