For almost three years Syed Fahad Hashmi, 29, has been held in solitary confinement at the Metropolitan Correctional Center in lower Manhattan.

Though he has yet to be convicted of any crime, Hashmi is the first person to be extradited to the United States from Britain to face charges of terrorism.

Hashmi moved to London in 2004 to earn a master’s degree in international relations at London Metropolitan University. While living there, the U.S. government alleges he knowingly allowed an acquaintance, Junaid Babar, to store waterproof socks and raincoats in Hashmi’s apartment for a couple of weeks. The U.S. government claims that Babar then delivered these supplies to Al Qaeda operatives in Afghanistan.

Hashmi was arrested in London in June 2006 based on Babar’s testimony to a U.S. grand jury. If convicted, he could face up to 70 years in prison.

Still awaiting trial, Hashmi is subjected to the government’s Special Administrative Measures (SAMs), restrictive rules usually reserved for mafia kingpins still able to organize criminal activity from behind prison walls. He has been in jail since his arrest and was extradited to the United States in 2007. Supporters say Hashmi is being held in conditions that violate the Eighth Amendment’s prohibition of “cruel and unusual punishment.”

A practicing Muslim, Hashmi is not allowed to attend group prayer and is subjected to 24-hour electronic monitoring. He is only permitted to write one letter to a single family member each week, using only three pieces of paper.

These types of restrictive conditions have become common under the “war on terror,” but Hashmi’s case indicates a new level of severity.

Hashmi’s trial is expected to begin in federal court early this year, but it has been postponed at least once. At trial, observers expect prosecutors to withhold evidence, and the government’s indictment signals that it intends to bring his political beliefs up at trial.

The community of support that has risen up around Hashmi’s case includes his teachers, the Center for Constitutional Rights and the New York theater community. They have been holding weekly vigils for months and are demanding that the SAMs be dropped. Prior to his arrest, activism played a significant role in Hashmi’s life, and he was deeply committed to Muslim and antiwar causes. His brother, Faisal Hashmi, calls the charges “ridiculous.”

Remi Kanazi, a prominent Palestinian-American poet and participant in the weekly vigils, is concerned that the disregard for human rights that characterized the Bush era is being repeated.

“Unfortunately, the worst aspects of the Bush years continue under Obama. As activists, we continue to demand the change that is necessary: the restitution of civil liberties and equal rights for all citizens,” Kanazi said.

For information about upcoming vigils, go to thawaction.org. To find out more about Fahad’s trial, visit freefahad.com. 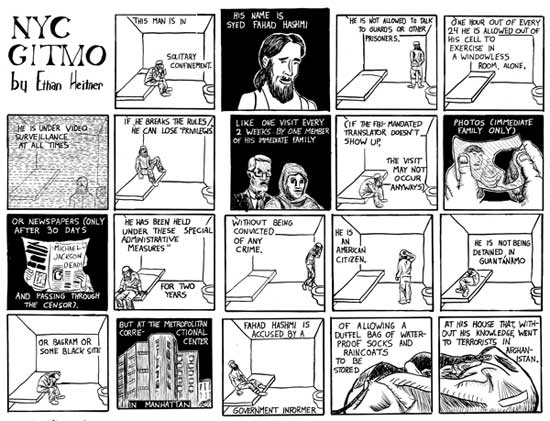