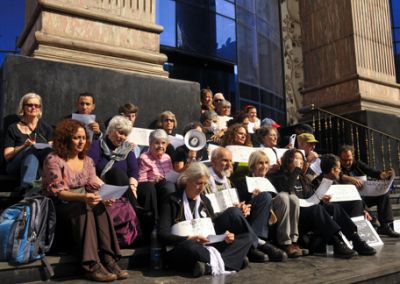 CAIRO, January 1–85-year-old Holocaust survivor Hedy Epstein ended her hunger strike today. She had begun the fast to protest the Egyptian government’s refusal to allow the Gaza Freedom March to cross the border into Gaza (see ‘You Have to Put Your Own Life on the Line’ by Judith Mahoney Pasternak).

Epstein had been joined by some 30 other participants in the march, and today most of them also ended their fast with a press conference on the steps of the Journalists Syndicate building in Cairo.

We are 30 activists from around the world, inspired by Hedy Epstein, the 85-year-old Holocaust survivor who initiated a huger strike in Cairo for the opening of the borders of Gaza to the outside world.

We recognize that the Palestinians of Gaza continue to hunger for food, shelter, and most of all for freedom.

We continue to hunger for justice for Gaza and all of Palestine. At this time, we announce that we will feast when Gaza feasts.

Until that time, each of us will choose the time to end her/his fast and again take food.

Our pleasure in that food will always be mixed with the pain of Palestinians.

We call on all people of conscience from around the world to renew their resolve for peace and justice in Palestine.