CAIRO, January 1—This morning, a couple of hundred Gaza Freedom March (GFM) participants ringingly endorsed the “Cairo Declaration,” the founding document of a new initiative for deepening opposition to Israel’s apartheid policies and increasing the reach and impact of the Palestine solidarity movement. Hammered out over the past week by a Gaza Freedom March committee led by the South African delegation, the declaration centers on a plan for recruiting international trade union support for the campaign for boycotts of, divestment from, and sanctions against Israel. 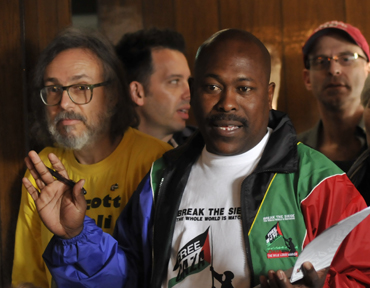 The document proposed concrete steps, including “an international speaking tour … by Palestinian and South African trade unionists and civil society activists to be joined by trade unionists and activists committed to this program within the countries toured”; “coordination of citizens arrest bureaus to identify, campaign [and seek] to prosecute Israeli war criminals”; and “campaigns against charitable status of the Jewish National Fund (JNF),” whose charter
mandates it to purchase land for Jewish settlement.

Two of the seven action points are specifically aimed at bringing trade unions into the effort: “campaigns to encourage divestment of trade union and other pension funds from companies directly implicated in the occupation and/or the Israeli military industries” and “a systematic unified approach to the boycott of Israeli products involving consumers, workers, and their unions in the retail, warehousing, and transportation sectors.”

The GFM delegates adopted the declaration with minor changes and resoundingly thanked the committee that had worked to draft it, in particular the representatives of the Coalition of South African Trade Unionists, which had generated the initiative. 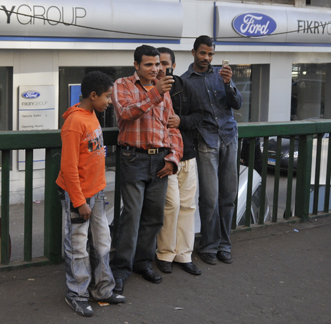 The 25-member steering committee that drafted the document also passed it through two Palestinian GFM organizers. According to Dropkin, they differed in their assessments: Haider Eid in Gaza called the document “excellent,” while Omar Barghouti in Jerusalem characterized it as “superb.”

Bouyed by the adoption of the declaration, GFM participants made their way over to the Israeli Embassy near the Cairo zoo. At 12:45, about 400 people converged from different directions to form a crowd opposite the building, where they held up banners and shouted chants including “Boycott Israel” and “Nous sommes tous Palestiniens” (“We are all Palestinians”).

Caught a little by surprise, the Egyptian police did not arrive for 20 minutes, at which point they surrounded the demonstrators and tried to keep them from the view of passing cars and Egyptian citizens, which has been their response to most of the actions by GFM this week. In response, the activists hung banners from trees and lampposts so that they were visible above the heads of the three-deep line of police: “End the Siege!” “Arrest Netanyahu!” “Free Gaza!” 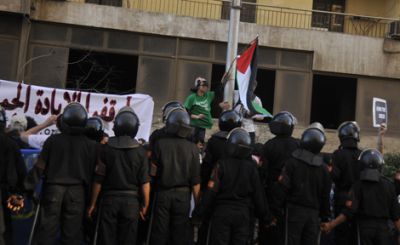