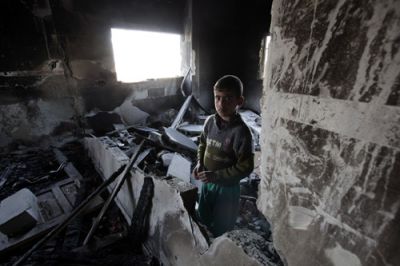 BEIT HANOUN , Gaza Strip—One year after Israel’s ferocious assault, Dr. Mustafa El-Hawi, a professor at Al-Aqsa University, traveled by bus to attend a protest against the continuing Israeli siege of Gaza. As the bus passed by still-devastated areas of Beit Hanoun, in the northeast of the 25-mile-long coastal strip, the U.S.- and British-educated El-Hawi reflected on those terrifying days.

“I spent 20 or 21 days living in the basement with my children and with three families of my neighbors. They were staying with us with no access to water or electricity, so we set fire in order to cook and just to feed my children,” El-Hawi says.

El-Hawi, 51, lives in the densely packed Gaza City neighborhood of Tel Hawwa, which Israeli troops and tanks invaded in January 2009. “During that time, we don’t sleep, we don’t have access to proper medicine, to anything. We are expecting to die any time.”

Arriving in Beit Hanoun in the morning of Dec. 31, El-Hawi joined about 600 Palestinians and 85 internationals to mark the one-year anniversary of the “Gaza massacres” that killed almost 1,400 Palestinians. The group attempted to march to the Erez border crossing with Israel, where about 1,000 demonstrators had gathered on the Israeli side, also protesting the siege. The Gaza group could come no closer than half a kilometer, however, for fear they would be shot by Israeli forces.

El-Hawi says his children were traumatized from being in a war zone. As for the rest of Gaza, he says, “We are living in jail. We are living in a cage, like chickens in a cage. There’s nowhere to go. What do we do?”

Time seems to stand still in Gaza. The scars left by 22 days of land, naval and aerial bombardment and invasion remain fresh. Thousands of tons of rubble remain where buildings once stood. Places like the American International School in Beit Lahiya, pulverized to chunks of concrete and wood by the Israeli Air Force, dot the 25-mile long coastal strip.

More than 15,000 homes were destroyed or so severely damaged that 100,000 Palestinians were rendered homeless. Thousands still shelter outdoors in tents. Nearly 14,000 acres of farmland sit idle, either because they have been destroyed by Israeli bulldozers, declared off limits in Israel’s deadly “buffer zones” or because farmers are denied access to seed, water and fertilizer. Seventy-five tons of depleted uranium contaminate the soil. Nearly half of Gaza’s 122 health facilities were damaged or destroyed, and few have been fully repaired.

The blockade Israel and Egypt impose on Gaza has stifled reconstruction. Since the end of “Operation Cast Lead,” barely four truckloads of construction material have been allowed in per month, as opposed to an average of 7,400 trucks a month before Israel choked off supplies. The trickle of cement, wood, glass and steel that makes it through smuggling tunnels is too expensive for most people in a territory where 80 percent of the population is impoverished.

Even before the war, 98 percent of industry was shuttered due to lack of supplies and 70 percent of families lived on less than one dollar a day per person. Gaza suffered more than $650 million in losses due to the Israeli destruction of housing, commerce, industry and farming. Unemployment in Gaza is above 40 percent, and 80 percent of its people rely on U.N. aid.

Israel and Egypt imposed the blockade in 2007 when the Islamist movement, Hamas, took power in Gaza after winning democratic elections.

Norman Finkelstein, an author and scholar on Israel and Palestine, says the United States and Israel’s logic behind the siege is to “teach Third World people what democracy means, and that means you elect people who we like, or you pay a price. And so the Gazans have to pay the price of electing the ‘wrong’ people into power.”

Helena Cobban, a British-American journalist and the executive director of the Council for the National Interest, a progressive Washington, D.C. based organization that advocates a new direction for U.S. policy in the Middle East, visited Gaza last November.

“There are whole areas of northern Gaza that still look like Dresden 1945 or Coventry after it was bombed during the Second World War, because they haven’t been able to rebuild anything,” Cobbansaus. “That’s the most stunning thing, that for one year, including the heat of summer and the cold of winter and rainstorms and anything else, no reconstruction materials have been allowed in by the Israelis at all.”

During the one-sided war, Majed Abusalama, a 21-year-old student and journalist, volunteered to travel with ambulances to transport the injured. He says Israelis often shot near the ambulances. During the assault, eight medical personnel were killed by Israel, 15 hospitals were damaged, and 29 ambulances were damaged or destroyed, according to the Palestinian Center for Human Rights.

Abusalama’s uncle was killed by Israel in the first week of January.

“We didn’t have bread in our house, and we wanted bread. [My uncle] went to bring us bread, and in the streets, they shot him. They cut all his body, and he was murdered,” Abusalama says. “A lot of friends, I can’t count, more than 40, 50, 60, I don’t know, but there are a lot, a lot of friends were killed.”

Testimonies like El-Hawi’s and Abusalama’s and reports from human-rights groups have led to growing calls for accountability for what many observers term Israeli war crimes. The U.N. Goldstone Commission report on the January 2009 Israeli-Palestinian conflict in Gaza concluded that “Operation Cast Lead,” “was a deliberately disproportionate attack designed to punish, humiliate and terrorize a civilian population.”

The siege on Gaza has affected more than the flow of goods. El-Hawi is often prevented from attending conferences abroad because the borders are sealed.

Abusalama says that more than 25 of his friends have lost scholarships abroad because they couldn’t leave Gaza, and another uncle died because he couldn’t travel to Egypt for urgent medical treatment.

To circumvent the blockade, groups in Gaza have constructed hundreds of underground tunnels that cross into Egypt and serve as Gaza’s “lung.” According to one report, 80 percent of its imports now come through the tunnels.

Israel, however, bombs the tunnels frequently, and Egypt gasses them, even while people are still inside, according to the Israeli daily Haaretz. Egypt is also building a steel wall along its border with Gaza in order to close off the tunnels. The wall, reportedly designed by the U.S. Army Corps of Engineers, will be about six miles long and could extend up to 100 feet underground.

Nonetheless, life continues, whether it’s scavenging building materials from the rubble, commerce based on the tunnel economy or schools operating on two or even three shifts a day to handle the influx of children displaced from bombed-out homes and schools.

Some, like Abusalama, cope by turning to activism. He frequently participates in demonstrations and recently protested the illegal Israeli buffer zone in Beit Hanoun.

Others, like the members of Da Arabian Revolutionary Guys Team, or Darg Team, turn to music. One of many political Palestinian hip-hop groups, the Darg Team recorded a music video, 23 Days, immediately after the Israeli assault, which features them rapping in front of scenes of destruction in Gaza.

Rapper Sami Bakheet says, “The only thing we were thinking about is if we survived this what we should do, what should we write and how we should deliver this the right way, and that was the birth date of 23 Days.”

“We live all what we go through for a reason,” Bakheet says. “That reason is to go on in our life, to build a future for us and the next generation, and for fighting through our music so the whole world knows about the reality of Palestinians.”