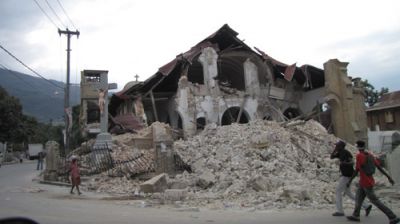 PORT-AU-PRINCE, Haiti—Walking through the tent cities of Port-au-Prince, one sees in the hobbling amputees, skull-faced children and hungry people the aftershocks of “The Event.”

On Jan. 12, for more than 40 seconds, the earth swayed beneath millions of Haitians. Roofs slid into streets squashing cars, buildings collapsed into clouds of pale dust and inside people were pulped.

No one knows how many survived initially, pinned between slabs of concretes. Some were pried out by family, neighbors and strangers digging through the dark of night. Later, international search-and-rescue teams sent dogs sniffing through rubble, searched by flashlight and salvaged a few more.

When the injured arrived at the makeshift hospitals at the airport, many had crushed limbs, bones jutting out of skin like branches and battered skulls. Thousands of amputations have been carried out; one doctor told the media, “Not since the Crimean war have surgeons amputated so many limbs.”

At the Medishare tents at the Toussaint Airport a doctor led me to the operating theater where surgeons cleaned a man’s leg and drilled pins into the bone to hold it. “We’re using 1980s technology, but it’s what we have,” he said. “The wounds get infected and it becomes a race to keep them clean before gangrene sets it.” He was haggard and weary. I saw dozens of Haitians lying in cots with bandaged stumps, eyes glazed with pain and fear.

Later that night, the doctors and I swallowed shots of Scotch. The liquor fired us up and one doctor leaned in slurring, “By Tuesday people are going to start dying of dehydration.” We couldn’t say anything and kept drinking. The next day, I walked through the tent city of Champs de Mars in Port-au-Prince and saw bone-thin children limp in their mothers’ arms. Fathers begged for food. I had nothing but questions to give. Has aid arrived? No. How long have they gone without food? Days.

Standing there, I knew that wave after wave of death will flow through Haiti as hunger and thirst become starvation and dehydration. In the midst of interviewing people, I saw a blue tent, large, clean and new. The family inside told me they got it through a friend in the government. I pressed for the friend’s name but the father shook his head, “No.”

Angry neighbors told me that nine days after The Event, an aid truck filled with tents arrived, but amid the pushing and shoving, police came in. One man, Brunache Carlina, claimed the police took some tents and the rest quickly disappeared into the Ministry of Culture, where it is believed they were sold.

Another man, Fritz Jermin said the police beat the people, took the tents and sold them in the upper-class neighborhood of Petionville. I drove up the broken streets to Petionville. When I saw a tent I asked the owner how she got it. “Through a friend in the government,” she said.

Every day people told me to tell Americans and the world not to give aid to the Haitian government but to hand it out themselves or channel it through international groups. I heard over and over a deep hate and distrust of the government (a government forced on them by the Americans). It is an aftershock of the earthquake.

But under these aftershocks is a quieter reverberation. On the way to Champs de Mars, my fixer told me Haitians were blaming Vodou priests for the earthquake. I told him it sounded like what Pat Roberstson said. He insisted it was true.

When we arrived, I interviewed Ilonese Julot, a 55-year-old mother of four. Her eyes seemed to float in sadness. When I asked her about the earthquake she said, “God is mad at the Haitians for Vodou. We need to get down our knees to ask forgiveness.”

Her words echoed what Haitian banker Henri Nerée heard. As he gave me a ride in his truck to the U.N. compound, Nerée told me how he argued with men saying Vodou caused the earthquake. “No, it’s nature, it’s tectonic plates slipping against each other,” he said, simulating the motion with his hands. “But they couldn’t hear me. They aren’t literate but they need validation and need to feel they know something even if they don’t.”

But it seemed to me more than ignorance; it was also internalized guilt as a way of coping with powerlessness by offering an illusion of control: Prayer, attonement and redemption will keep you safe. If it doesn’t, it’s because we did not pray and atone hard enough.

Matching the loss of faith in government and Vodou is a rise of faith in the United States, whose government occupied Haiti from 1915 to 1934, backed the bloody Duvalier dictatorships and twice toppled the president of the poor, Jean-Bertrand Aristide.

My fixer said, “Haitians believe in you Americans more than you believe in yourselves.” I told him that was a dangerous faith; we will let them down.

He huffed, “Pray they don’t turn on you because you don’t want Haitians as enemies, not in the age of terrorism.”

I fear for their future. The anger and mistrust of government, the loss of faith in the spirituality that kept Haitians rooted in their history and their turn to the United States is shifting Haitian culture into a dangerous direction.

Yet if months drift by and they still live in the streets, Haitians will have lost their last illusions. It is there at the end of faith when they may turn to the one source of strength they have left, each other, and we may witness another revolution.

They can become the earthquake that causes the City on the Hill to fall. As they say, “Deye mon gen mone.”

You have power, mine is more.

For more information, please see the following articles in this issue of The Indypendent:

“Haiti: How to Turn Disaster into Catastrophe” by Arun Gupta