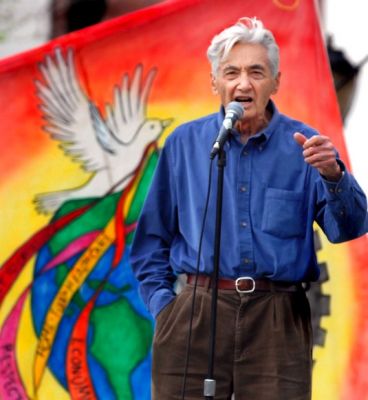 Legendary historian, playwright and social activist Howard Zinn likely died just the way he would have wanted — from a heart bursting with love and revolutionary spirit while on a speaking tour highlighting the voices of uncommon heroes in American history.

Zinn, 87, passed away from a heart attack while in Santa Monica, Calif., just days before a planned performance at the Santa Monica Museum of Art. He lived in Auburndale, Mass., and was a professor emeritus in the Political Science Department at Boston University.

The People Speak, a dramatic musical performance of letters, diaries and speeches by everyday Americans throughout history, was Zinn’s latest project. His book, A People’s History of the United States, has sold more than one million copies since it was published in 1980 and has become a text routinely used in classrooms across the country.

Born in Brooklyn in 1922 to Jewish immigrant parents who were factory workers with a limited education, Zinn said that he was introduced to literature when he received the collected works of Charles Dickens through a 25- cent coupon offer in the New York Post.

When 17 years old, at the urging of young Communists in the neighborhood, he attended his first political rally in Times Square. “Suddenly, I heard the sirens sound, and I looked around and saw the policemen on horses galloping into the crowd and beating people … and then I was hit. I turned around and I was knocked unconscious,” he told the Associated Press.

Zinn’s fierce antiwar activism was rooted in his experience as a pilot during World War II after he participated in the bombing of Germany, Czechoslovakia and Hungary. Returning from war, he attended New York University on the GI Bill and received his PhD in history from Columbia University. In his doctoral dissertation, focused on the congressional career of Fiorello LaGuardia, he argued that LaGuardia represented “the conscience of the twenties” as he fought for public power, the right to strike and a redistribution of wealth through taxation.

While teaching at Atlanta’s Spelman College in the 1950s, Zinn participated in civil rights campaigns to protest segregation policies. One of his young students at the time was writer Alice Walker. Although tenured, he was dismissed in 1963 due to his support of female student’s involvement in direct action against segregation in Atlanta.

Throughout his tenure as an academic and writer, Zinn testified as an expert witness at several historic trials, including that of Daniel Ellsberg and the Camden 28. He was a vocal critic of the wars of the last 50 years, including Vietnam, Iraq and Afghanistan. His 1967 book, Vietnam: The Logic of Withdrawal (Beacon Press), was the first book to call for the immediate withdrawal of U.S. troops with no conditions.

If Zinn had lived another day, he certainly would have immediately expressed criticism of President Obama’s State of the Union address.

“I’ve been searching hard for a highlight,” Zinn wrote in The Nation Jan. 21 about the first year of the Obama administration. “I don’t see any kind of a highlight in his actions and policies. … I think people are dazzled by Obama’s rhetoric, and that people ought to begin to understand that Obama is going to be a mediocre president — which means, in our time, a dangerous president.”

This echoes what he told The Indypendent a year earlier, just after the election: “And if he [Obama] doesn’t act, it will be up to the people, as it always has been, to raise a shout that will be heard around the world — and compel the politicians to listen.”