On Thursday night at the offices of the Center for Constitutional Rights, homeless members of the citywide grassroots organization Picture the Homeless (PTH) convened a summit with leaders from other civil and human rights organizations to discuss the NYPD’s use of the Disorderly Conduct statute, which they charge is unconstitutional in its vagueness and arbitrary enforcement. Community members testified about being ticketed or arrested, with their alleged violation never specified. The organizations present identified such policing within an unjust pattern of profiling based on perceived homeless status, race and other discriminatory factors. 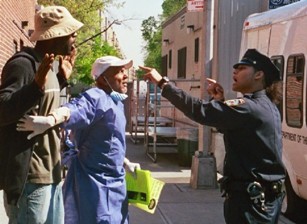 Video and in-person testimonies of personal experience were presented, as well as trends identified by these rights organizations in their surveys and outreach. The homeless activists encountered countless persons who experienced being targeted with a ticket or arrest, then pressured to plead guilty and pay a heavy fine, while never accused of a specific transgression of the law. These discriminatory practices—against homeless persons, Black Americans and other overlapping sectors of the city’s population known to be targets of police harassment—amount to a severe disruption of people’s lives, legal records and well-being. The activists at the summit called for a united campaign of social justice organizations against these unconstitutional violations of due process, and the larger climate of criminalizing communities and individuals—homeless and non-homeless—simply for who they are.

John Jones, a long-time volunteer with Picture the Homeless, who faced a disorderly conduct arrest himself, after which no charges were ultimately pursued, said: “This issue is important because people across the five boroughs are being ticketed or arrested for disorderly conduct—and then are being encouraged to plead guilty and face a hefty fine ordered by a criminal court judge, though they’re never even accused of a crime.”

George Bethos, a leader of the NYC AIDS Housing Network and VOCAL NY Users Union, said: “The NYPD’s record of abuse of the disorderly conduct statute has become a pandemic in its oppressive application. It’s a perfect complement to the Quality of Life fishing expeditions that have excused tens of thousands of unconstitutional arrests and detentions of NYC’s poor, working-class and homeless people. Until this war on our communities is stopped, our rights are rendered meaningless.”

PTH member and Street News editor Indio, who faced a disorderly conduct summons for sitting on a park bench near beer cans that weren’t his, was told by the officer, “‘Tell it to the judge.’ This harassment is unconstitutional! We need to join together to stop this attack on our rights.”

Also present were representatives from FUREE, Malcolm X Grassroots Movement, and the October 22nd Coalition to Stop Police Brutality. All the organizations pledged to stay vigilant and stay in touch with each other about advancing this campaign to challenge the NYPD’s “disorderly conduct” violations of New Yorkers’ rights.