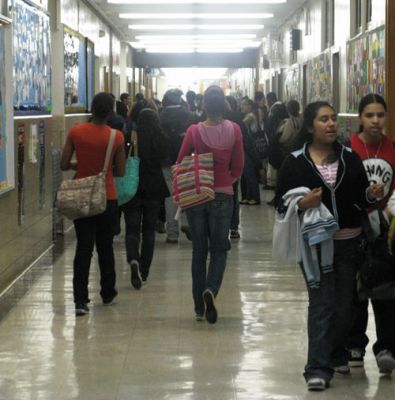 Brittany Rosado, who attends Christopher Columbus High School in the Northeast Bronx, used to belong to a gang and skip class regularly. Now, after being accepted into Columbus’ Renaissance program, Rosado is on track to graduate.

“When my mother started to give up on me,” she says, “I came to Renaissance because I wanted a chance.” Rosado, an eloquent senior with an infectious smile, now talks enthusiastically about her goal to attend Fordham University.

However, Rosado and the school’s 1,400 other students will be the last to attend Columbus High School.

New York City’s Panel for Educational Policy (PEP) voted on Jan. 27 to phase out Columbus High School, along with 18 other schools in the Bronx, Manhattan, Queens and Brooklyn, over the next three years.

The New York City Department of Education (DOE) says it is closing these schools because of “poor performance” and low standardized test scores.

This is a matter of dispute. While Columbus’ numerical score on its DOE progress report has steadily improved every year since the measure was instituted in 2006, its letter grade has remained a “C” because the scale keeps changing. In fact, in 2007, the school’s score improved so much that all the faculty and administration received a bonus. In 2009, however, Columbus received a “D” from the DOE because the grading scale changed by 10 points that year, according to Christine Rowland, United Federation of Teachers Teacher Center staff member at Columbus.

“We needed a 40 percent improvement to reach a ‘C,’ even though we [technically] had one already,” said Rowland.

Many teachers maintain that since the DOE only tracks test scores year to year and fails to account for social barriers many students face, the department is effectively stacking the deck against large high schools.

Further, both standardized tests and progress reports alike fail to account for the myriad difficulties that public schools like Columbus face, including overcrowding and under-funding. 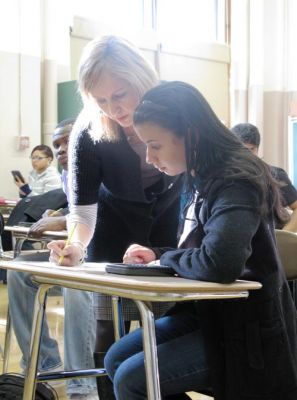 “We have to look at the context of the data,” says Rowland. “It’s about the children we serve, who are not the same from school to school.”

Eight of the 13 members of the PEP that voted to close Columbus were appointed by Mayor Michael Bloomberg. Many observers view the decision as the latest step in Bloomberg’s move to close large schools and break them into clusters of smaller public and charter schools.

Phillip Romero, an English teacher at Columbus, is wary of the implications of this vote.

“The American public education system is one of the best ideas our forefathers ever had, and it’s being thrown out without so much as an afterthought,” he said. “The American teacher has become a whipping dog.”

Since the mayor was granted control of the system in 2002, the city has closed or plans to shut down a total of 110 schools, including many large high schools.

“Honestly, I feel like someone died today,” said Columbus Principal Lisa Fuentes. She added that the school had counselors on call to help students deal with the move to close the school.

“The students’ emotions range from sad to angry. They keep asking what they can do. They are having a hard time accepting that it’s final.”

This is not the first time that the city has tried to close Columbus High School. In 2002, the DOE effectively downsized Columbus and its student body of 4,500 by moving five smaller high schools into Columbus’ four-story building. By 2003, after these new schools had cherry-picked Columbus’ best-performing students and squeezed the rest into an overcrowded space, the DOE announced plans to close the school.

Columbus attempted to handle the overflow with a split schedule: 11th and 12th graders attended school from 7 a.m. to 12:30 p.m. and the ninth and 10th graders from 12:30 to 5:30 p.m. Columbus underclassmen were unable to participate in after-school sports, activities, or even tutoring due to the schedule. The smaller schools maintained a regular schedule and participated in Columbus’ sports teams.

Classes were taught in any open space. There could be eight classes of 40 students each being taught in the library at the same time. “It was like teaching in a subway car,” says Karen Sherwood, an English teacher of 17 years. “They looked at our kids as allowable casualties.”

The DOE eventually reversed its decision in light of the staff’s efforts to present the department with data that proved Columbus’ students were being treated unfairly and that the school was actually not failing. And despite the difficult conditions, Columbus was still managing to consistently beat the city’s graduation rate.

Columbus has the second-most-challenging student body in the city, according to the DOE. Unlike other smaller public schools, it is required by the DOE to accept all students who choose to attend; it also receives a disproportionate amount of students with criminal records and accepts new students throughout the school year.

Overcrowding is a persistent issue at Columbus. Students do not have lockers and are required to carry their coats and books with them throughout the day. In many classrooms, every seat is occupied.

The school offers three programs designed to meet the needs of students with a record of behavioral and academic difficulty. The Women’s Empowerment and Boys II Men programs focus on building a positive self-image and are geared toward ninth and 10th graders; the Renaissance program is aimed at 11th and 12th grade students.

The close attention and support provided by these programs — through a network of teachers, social workers and academic advisors — often makes a significant difference for students.

“We did not give up on them,” Principal Fuentes said. “Our students are who they are not because of what we’ve done for them, but because of the chances we’ve given them.”

Another reason for Columbus’ success is its extensive extracurricular offerings. There are more than 20 varsity sports teams, a cheerleading squad, a step team and five school bands. The curriculum also includes drama, culinary arts, and other programs.

Tenth-grader Javier Torres travels more than an hour each day to Columbus from his home in Soundview in the Southeast Bronx because it was the only school that accepted him after his local high school was closed in 2009. His grade point average has improved from 63 to 80 since he enrolled, and he plans to try out to play right field for Columbus’ baseball team this spring. He hopes to play baseball for a college team and, later, the New York Yankees.

When the DOE proposed closing Columbus last month, the school community quickly mobilized. A rally of students, teachers and parents outside a Jan. 7 DOE hearing about closing Columbus drew more than 1,000 people. Staff members even started a Facebook group, “Save Columbus!,” which currently has more than 1,900 members.

The PEP’s Jan. 27 decision to close Columbus has left students and teachers disappointed and angry.

“My students will definitely feel like secondclass students,” said Fuentes. “They feel like failures because they are called failures. We try not to make them feel that way. We try to focus on their successes.”

When Jaime Chahalis, an New York City teaching fellow who teaches self-contained special needs students at Columbus, asked her students to write an essay on their plans for the future, the vast majority wrote that they wanted to go to college. “They don’t want to hear that that’s not an option,” she says. “We can get them there, but the DOE is cutting us off at the knees.”

Rowland, who has worked at Columbus for eight years, says that the DOE’s decision to close the school will do more harm than good.

“These are kids that don’t have a lot of options and the city just doesn’t seem to care. The impact is on the least fortunate students. They are just being shuffled around. It’s disgusting,” she said tearfully.