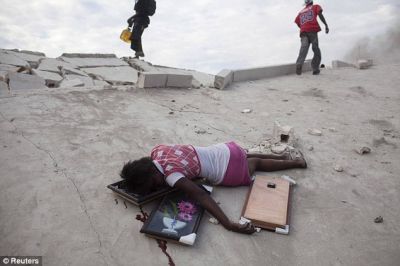 Glass crunches underfoot. We walk into downtown Port au Prince, a jagged valley of collapsed stone. A chunk of wall was split loose from the building by the latest earthquake and fell in the street like a giant boulder. People scamper around it. Electric cables sway around us like a web.

We follow the hundreds of Haitians who climb rubble and crawl into nooks to find shoes or clothing or electronics to sell. Need drives everyone here. Need for shelter or food or a future that can be claimed. Need drives them to scale fallen roofs or crawl into shaky crevices. And the need to know the full measure of desperation forces us to follow them. After slipping around the boulder, we walk on a scene of cop waving a gun at two teenagers, a boy and girl, lying face down on the street. He yells orders and they lift their shirts to show they have no stolen goods on them. He tells the girl to leave first and says, “Can’t believe I caught a girl stealing.” People laugh and then as if hearing a silent alarm, move quickly down the street.

As the photographers angle around the crowd, I push my “fixer” a spindly shy young man named Bretin to ask what is happening, where, who and how. Like many fixers here he promised more than he could deliver to make money and buy certainty in the chaos. I watch him and grimace. He circles me like a shadow, a gentle touch to warn me of a rushing car, a grasp when gunfire booms and the crowd runs blindly.

Michael, a young, scruffy, shaggy-haired photographer stands by me and shoots a glance at Bretin, “He’s fucking useless.” I glance at the young man as he blankly stares at the swirling crowd. “The fixer I had before was a boxer, spoke perfect English, was on point with it,” he husks. “This guy’s a fucking pussy. Whoever’s with you has to be able to tell you what the crowd is saying, to tell them to back off and be heard, you know? This guy…” He blows through the corner of his mouth.

Yesterday Michael was in these ruined streets when police came on people looting a store. Some of them dashed across a roof. The police fired and a girl, paintings in the her hands, was hit in the head. Everyone lifted her body up and when her parents saw their daughter’s blasted face, they wept bitterly. When Michael told the story I saw the fear and anger and sadness mix like paint in his voice.

He needs to feel safe. Bretin needs to feed his family. We need to conserve our funds. The Haitians need to survive. We are colliding in this pressure cooker of a destroyed city. But as Michael leans between a cop and photographs him dragging a boy and I glide through the crevices of the crowd without being grabbed; I realize that we are “white,” if not by skin-color then by wealth and nationality.

A shield of privilege surrounds us. If we are hurt, if our bodies are seen on TV lifeless and limp like dolls; the image of Haitians will go from victims of a natural disaster to terrifying wild black people. They know this. They are incredibly intelligent of the forces shaping how the world sees them. And they let us know they know it. When I followed looters, pen and pad ready, a man yelled by my ear in English, “This is what you came for isn’t it?”

I wanted to apologize and say fuck-off and ask if he came downtown not just for things but also the excitement of playing hide and go seek with the police. But the sharp crack of gunfire and the heavy chug of a shotgun yanked our eyes upward. Two police were on the roof, the same one the girl was shot on yesterday, firing at looters. We dashed up on it, quickly orbited the police with cameras and writing as they lowered their aim to fire at the looters below and scare them. Two dark young men, glistening in the sun, stared at the police.

The cops yelled. Bretin, who scrambled up with us translated. “If you don’t step down I’m going to shoot you!” 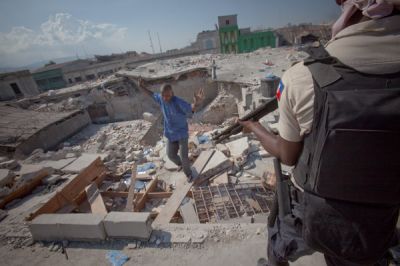 The two men stopped. And this strange moment happened. One of them held his arms wide and shouted back. Bretin didn’t translate but I could hear the challenging sarcasm in the man’s voice. He was saying, “Are you going to really shoot me over this shit I’m stealing when I have nothing.” He shrugged loudly and walked away. The cop didn’t shoot but aimed his shotgun at the other man, barely a teen really and yelled “I’m going to kill you. Get down! Get down!” The teen’s face lit up with terror and he got sucked into the gestures of obedience. He bowed his head, lifted his shirt to show his naked belly and empty waist belt, then raised his hands and crossed the craggy rubble strewn roof. The cops grabbed him, forced him down, kicked his legs apart.

We followed them down and I wondered, if we weren’t here if they would still be alive or like the girl yesterday, be a corpse whose blood irrigated the headlines. The people watched us briefly and then flowed down the street, smoke belching trucks grazed our faces as we stood back, bleak eyed men watched warily from the side as people trickled in and out of the buildings. A young man, face scraped raw pink, rode by on a motorcycle.

Two boys lay face down on the ground as a police officer stood over them. I had Bretin ask them their names. The younger one, with a small head and large eyes, said his name was Gielverno and that he was 14-years-old. His friend Valenski, larger and nervously blinking, said he was 19-years-old.

I jogged away as a truck rumbled by, a car, another truck as people ran around as if inside boiling water. Someone tugged my arm, I turned and saw a young man digging into the air between us with his hands as if trying to dig through a wall.
“You American!”
I shook my head yes.
“You listen to me! You take down my voice!”
I held my pad and nodded to him.
“Terrible happening here. MY BABY KILLED! MY DADDY KILLED!” He hit his palm with his hand like a hammer at the end of each sentence. “My HOUSE is broken.”
I ask him his name. Bretin re-appears and tries to spell it for me but the man waves him away.
“Saint Vin. Last name. M-A-C-E-L-Y-N. Macelyn,” he juts his finger at each letter and says. “I have nothing left in life! Tell Americans, I have nothing left in life.”