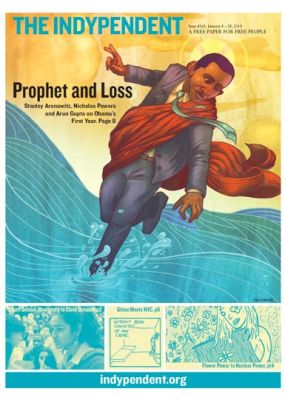 That is an energizing vision for New York City. We are mired in a post-great-city provincialism now. New Yorkers’ creative life is encased in inbred careers. The arts are unheard of, for instance, outside of their subcultures of critics, parties and backers. Relinquishing public space is key to the impotence and depoliticization of the arts. My own home art form is theater, and literally nobody has any idea what theater is doing. Meanwhile, the totalizing saturation by varieties of corporate theater on our streets and sidewalks is permitted even when it’s clearly illegal. We’re trained to respond with, what, “good for jobs!” “private property!” “the struggling economy!” Democracy, and a subset of democracy — call it “the greatness of a New York” — depends on retaking public space.
—REV BILLY, 2009 MAYORAL CANDIDATE

What Public Ad Campaign is doing is dynamic and interesting. However, it will ultimately lead to anarchy and the “uglification” of these public spaces as more individuals leave their own mark on public spaces at the expense of someone else’s taste. I have long thought that cities should require a few simple things when it comes to outdoor ad space: 1. Each space should be offered to non-commercial posting at least a few times a year so that spaces are a mix of ads and art/design; 2. Cities (especially New York) should require that a few well-known graphic designers advise and comment on what is being posted. This will lead to beautification, more dynamic displays and an uptick in the outdoor commercial design we all see.
—ANONYMOUS

OBAMA: A YEAR LATER
Responses to “Hope Has Left the Building,” Jan. 8:

The American public has been taken again by a politician who can lie with a sincere expression.
—PAT

Thomas Frank needs to write a sequel to, What’s the Matter with Kansas called What’s the Matter with Berkeley? It would detail how progressives keep funding and voting for Democrats, who then take the first opportunity to throw them under the bus. Rahm Emmanuel recently said that Obama is in no danger of losing the progressive vote because, “they have nowhere else to go.” Sure we have somewhere else to go on election day: we can go bowling. It seems to me that as always, nothing will change in favor of working people until we’re in the streets, until there is civil unrest, until commerce is disrupted. And Americans are just too sheep-like to do that any more. The Republic is lost. It’s sad.
—JONMARKP

Jonmarkp thinks all Americans are sheep. I’d amend that to too damned many are the products of bad schools and even worse the mass media. Nevertheless, there are two things going on at the moment that have a lot of support: the “move your money” movement has fired people up to move their accounts out of the big national banks and into small local banks and credit unions; it won’t bankrupt the big robber barons, but it will make them sit up and take notice that we’re not going to pay enormous fees for everything they deign to do for us anymore. Secondly, a lot of Democrats are changing their voter registration to Green or some other small party, a signal the Democratic main office, wherever that is, can’t help but notice. People CAN be fired-up to act when someone has a good plan. Any more ways to opt out, let’s hear them!
—BRYNA

NOT WAITING FOR THE OBAMA MIRACLE
Response to “Waiting for the Rapture,” Jan. 8:

Really, the Indypendent writer Nicholas Powers wants us to “focus on our actual lives”? I also don’t find this as necessarily “uplifting.” So instead of protesting, writing letters or the typical actions to express dissatisfaction, we should just focus on ourselves?
—ACTUAL LIVES

Dennis Brutus can be remembered and emulated for his uncanny ability to reach thousands of people who had no prior interest in poetry, no prior involvement with political issues. Brutus brilliantly synthesized literary style to political critique, placing him in character and content with other internally acclaimed notables such as Pablo Neruda, James Baldwin and Lawrence Ferlinghetti. Like these kindred writers, Brutus movingly, convincingly surveyed apartheid’s evils in broad declarative indictments, equally, employing spare words of sensual, intimate, vulnerable confession. In political engagements, he spoke in a Gandhi-like tone of statesmanship. After the African National Congress’ ascension to power in 1994, Brutus was quick to criticize what he considered indefensible compromises on the part of his former comrades. As many of his generation restrained their sentiments, Brutus is to be applauded for his courage and conviction, publicly voicing his objections at the cost of privilege and prestige in national circles. I enjoyed a 22-year friendship and collaboration with the man. Now in my middle age, I continue to absorb lessons he modeled — back in the day — when I was striving to find my poet voice, while aiding his efforts to mobilize students, workers, sportsmen and literati behind the goal of establishing a non-racial South Africa. It was a historic period. Brutus, a historic figure.
—MOE SEAGER