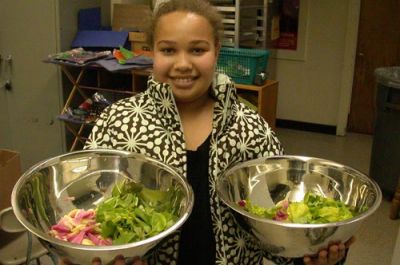 Such a feast would be out of reach for students in the New York City public school system, which serves about 860,000 meals per day, mostly pre-cooked food with limited nutritional value due to inadequate resources and outmoded guidelines supplied by the federal government. But now, we have the chance to make sure all school children eat healthily, as Congress prepares to reauthorize child nutrition legislation setting government policy through 2015.

The federal government currently spends $11 billion per year on school meals for more than 31 million students every day, 17.5 million of them from low-income families. Annually, school food programs— breakfast and lunch combined — serve over seven billion meals and are a rich source of buying power. A vibrant, growing school food movement is looking to shift that government money away from absorbing agribusiness’s overproduction of genetically modified soy, wheat and corn and hormone-and anti-biotic-laden beef and pork. The preferences would shift to tapping local agriculture and providing more veggies and fruits, with less reliance on fatty and processed foods.

School food activists are also working to remove the stigma that deters poor children from participating by making school food free for all and including it as part of the regular school day. It would cost about $12 billion to $16 billion more each year to create a free, nutritious breakfast and lunch program in the United States according to Janet Poppendieck, author of Free For All: Fixing School Food in America. This, coincidentally, is projected to be the monthly cost of war in Iraq and Afghanistan.

School meal programs were established in 1935 as a way for the federal government to purchase surplus farm commodities. Over time, educators and anti-hunger advocates added a new framework: children cannot learn well if they are hungry.
Providing more nutritious meals at school can also have a big impact on kids’ overall health. Research has shown that if kids are introduced to food through the curriculum — growing and cooking food themselves, studying food systems — they are much more likely to eat more vegetables and to lay off the fat, sugar, salt and junk food. With growing epidemics of diabetes and obesity among kids, inaction should no longer be considered acceptable.

Overhauling the school meals program can also have a big impact on the health of our planet: Our bloated corporate food system, replete with oil-based pesticides, fertilizers, heavy farm equipment, long-distance transportation and factory animal farming, is responsible for 15 to 37 percent of U.S. greenhouse gas emissions, according to various estimates.

This is change we can believe in, but it won’t come easily. Farm state congress members the corporate agribusiness lobby represents have dominated the nation’s food policies for decades. When Congress takes up amending both school nutrition and the supplemental assistance for Women, Infants and Children (WIC) programs later this winter or early spring, corporate “Big Food” will deploy all its power to shape legislation to its liking. The Child Nutrition Promotion and School Lunch Protection Act sets rules and funding levels for the major school-based nutrition programs, including the School Lunch, School Breakfast and the Summer Food Service Programs, as well as WIC from 2010-2015.

This time, however, agribusiness-as-usual will face an energized movement that includes anti-hunger and poverty groups as well as groups addressing health and environmental issues. New York has the nation’s largest school district and dozens of local food justice organizations have formed the New York City Alliance for Child Nutrition Reauthorization to push local members of Congress to do the right thing.

President Obama has pledged to end childhood hunger in the United States, and First Lady Michelle Obama has been an outspoken advocate of healthy, locally grown food. However, it is unlikely that President Obama will buck the agribusiness and “Big Food” corporations or press Congress to allocate the extra funds needed to make the school meals programs healthy, nutritious and universal unless we act. As with so many other progressive causes, our ultimate success depends less on what Obama is willing to do and more on what we do to make it happen. Time to step up to the plate!