For two weeks Jean Montrevil faced deportation. But after Monday’s earthquake, President Obama suspended the deportation of Haitians like him. 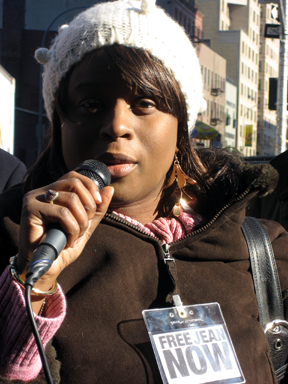 “Because of the tragedy that happened to Haiti, I could have been a widow today,” Montrevil’s wife, Jani, said Wednesday. She spoke to a crowd of about 100 people who gathered under two large American flags that hung from the front of the Varick Detention Center.

A growing chorus of clergy, immigrant rights activists and a local chapter of the SEIU have called for the release of Jean Montrevil since he was detained because of a 1989 drug conviction. Before he was detained, the father of four U.S.-born children met with lawmakers to push for the Child Citizen Protection Act, a proposal that would allow immigration judges to consider the best interests of American children before deporting their parent.

Last week 19 people were arrested during rallies that called for Montrevil’s release. This latest protest was turned into a vigil to commemorate the dead in Haiti and call for a more permanent halt of deportations to the devastated country.

“To send him back to this place is really unacceptable,” said Elizabeth Irwin, a Columbia University professor, as she passed out flyers for how to send aid to Haitian earthquake victims. “We are a rich nation, we can afford to be more generous.”

Irwin echoed many speakers at the rally who called on Obama to take the next logical step after suspending deportations to Haiti, and grant them Temporary Protective Status. By signing an executive order to put TPS in place, Obama would allow about 30,000 Haitians now in detention to remain in the United States because they are unable to return home safely.

As early as Wednesday Senator Kirsten Gillibrand used Twitter to call on the White House to take action, and Secretary of State Hillary Clinton has hinted she expected it would happen soon.

“Even though my husband still is not free, I feel that people had to die in order for him to have hope to gain freedom,” said Jani Montrevil.

Haitians have fought for TPS since 2008 when storms and mudslides devastated their country. President George Bush took action similar to Obama then—he suspended the deportation of Haitians. But he later decided not to grant them TPS, and deportations began again. 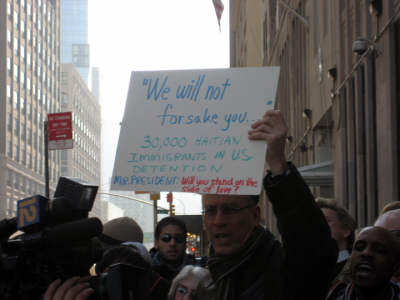 This time, groups like the National Immigration Forum say “there is no question that the chaos the country is experiencing in the wake of the earthquake qualifies as a reason to grant Temporary Protected Status to Haitians in the U.S.” An online petition calling for TPS for Haitians has already gathered thousands of signatures.

The usual suspects who oppose immigration have characterized TPS as another attempt at amnesty. Dan Stein, president of the Federation for American Immigration Reform (FAIR), has demanded that TPS for Haitians “must be accompanied by termination of [TPS] for nationals of other nations where conditions no longer merit their continued presence in this country.” This includes citizens of El Salvador and Honduras, who suffered similar storms as Haiti.

For now, FAIR’s voice has been drowned out by support for granting Haitians TPS and releasing those like Jean Montrevil from detention.

“I carry with me a burden for all those trapped in concrete and steel by willful construction, not by disaster,” said Reverend Robert Coleman, Chief Program Minister for Riverside Church, at Wednesday’s rally.

Further reading: “10 Things The United States Can And Should Do For Haiti,” by Bill Quigley, Legal Director for the Center for Constitutional Rights.