As soon as New York City Department of Education Chancellor Joel Klein leaned into his microphone and started to speak, the jeering began. When he proclaimed the DOE had to shut down 19 schools because “my first obligation is to our children,” the crowd of two thousand public school supporters roared in disbelief.

Over the next nine hours, more than 300 speakers challenged Klein’s reasoning, his motives and his right to decide the fate of their local schools at the Jan. 26 meeting of the Panel for Education Policy (PEP) held at Brooklyn Technical High School. The PEP, whose majority was selected by Mayor Michael Bloomberg, would ultimately approve all 19 school closings by a 9-4 vote in the middle of the night. Yet, there was little doubt that the panel’s action would end the growing controversy over the way Klein and Bloomberg are managing the City’s schools. “Education is a right,” said one parent as she waited to speak. “If we don’t fight, we’re going to lose it.”

The drama that unfolded at the PEP meeting was the product of years of simmering frustration in communities across the city. When Bloomberg plucked Klein, a lawyer, out the corporate world in 2002 to oversee over a school system that educates 1.1 million children in more than 1,500 schools, he promised a new era of mayoral accountability.

Instead, critics say the two men have exercised their power in an arbitrary and reckless manner — reorganizing the system’s administrative structures to be more remote from parents, spending millions on high-priced consultants and no-bid contracts, pushing high-stakes testing regimes that lack a sound pedagogical basis and closing scores of neighborhood schools.

When the DOE announced its proposed school closings in December, it struck a nerve. It was the largest rounds of school closings to date and it hit large high schools that have anchored their neighborhoods — Maxwell and Robeson in Brooklyn, Jamaica and Beach Channel in Queens and Columbus and Alfred E. Smith in the Bronx — especially hard.

Rallies and marches were held. At the affected campuses, hundreds of people turned out for hearings that were mandated under new State rules passed last summer. On Jan. 21, a feisty crowd of almost 400 demonstrators marched outside Bloomberg’s Upper East Side mansion.

“You have the pieces of a perfect storm starting to brew,” said Lisa Donlan, president of the District 1 Community Education Council in the Lower East Side. “Before, they did this and there were no consequences.”

The opposition to the school closings was propelled by a profusion of small groups many of them working under the umbrella of the Grassroots Education Movement (GEM). Participants included radical teachers union activists, students, parents and community groups that had already been fighting charter school invasions on their home turf.

In Red Hook, parents and educators from P.S. 15 mobilized against the DOE plan to expand PAVE Academy’s presence inside their school for another five years. The DOE claims the P.S. 15 school building is underutilized, a rationale it frequently invokes to justify moving an additional school into an already existing school.

P.S. 15 serves a large population of special education and English language learners, and has received A’s on the DOE’s annual progress report for the past three years. But all of that is at risk as PAVE, whose founder is the son of prominent hedge fund billionaire, continues to grow (see center spread).

Gov. David Paterson has joined Mayor Bloomberg in calling on the State legislature to abolish the current statewide cap on the number of charter schools which stands at 200. This effort stalled in mid-January but is likely to be revived again as the Obama administration continues to dangle millions of dollars of education aid in front of states that lift charter caps.

Critics of charter schools, including the powerful United Federation of Teachers, which represents 87,000 New York City school teachers, have called on the State legislature to amend the law to ensure that charter schools are open to all students, that their finances are transparent and that public monies are not wasted on excessive management fees or administrators’ salaries before raising the cap.

Back in New York City, it remains to be seen if organizers can build on the energy that was unleashed in the past month. Angel Gonzalez, a retired Bronx middle school teacher who co-founded GEM, wants to see teacher, parent and student groups coalesce into Save Our School committees.

“We are only beginning to wake up our sleeping giant, which is our community,” Gonzalez said. “We’re fighting a corporate power that has billions of dollars and Bloomberg is their front man. Eventually people are going to see through that.” 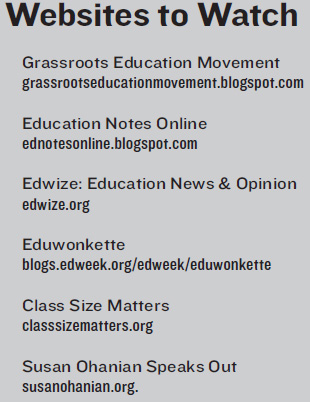