Occupied Palestinian Territory, Gaza City, Gaza Strip—Dr.  Wael Weshah walks the halls of the Shifa Hospital, explaining what working in a medical facility during the Israeli assault on Gaza last winter was like.  While Dr. Weshah is a remarkably jovial man, the hospital was a dark and tragic place during the war. 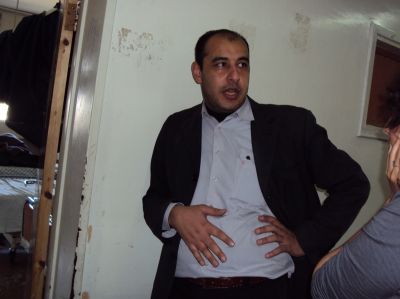 It’s been a year since Israel invaded the Gaza Strip, which killed over 1,400 Palestinians and injured over 5,300, the overwhelming majority of them civilians, according to the Palestinian Center for Human Rights.  “Of these, 1,600 were children, and 860 were women. In total, 600 persons suffered permanent disability as a result of injuries sustained during the Israeli assault, and 221 people required amputation,” a report by the center titled “23 Days of War, 928 Days of Closure” states.

The Shifa Hospital couldn’t handle the round-the-clock injuries rushing into the hospital, and had to transport some to Egypt for urgent medical attention.

During the war on Gaza, shortages of medicine occurred, and medicine shortages continue because of the illegal blockade of Gaza.  “The borders [were] forbidden.  There was a problem, a major problem,” said Weshah.

In the whole Gaza Strip, Weshah said, there are 3,000 doctors and 4,000 nurses.  About 1.5 million Palestinians live in Gaza.  Many medical personnel and those in training cannot leave the Gaza Strip due to the Israeli siege, preventing them from receiving up-to-date medical training. 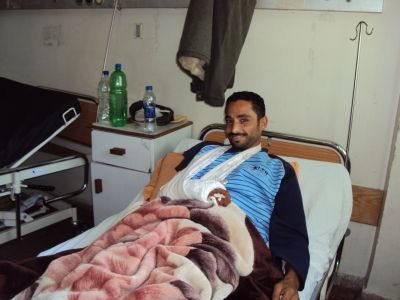 While most of the patients that entered the hospital during Operation Cast Lead are out, according to Weshah, there was one patient who was still in the hospital as a result of the war.  Muhammed Samouni was in one of the Samouni households in the Zeitoun area of Gaza when Israel bombed his house.  The Samounis, a large family, now live largely in tents in the area where their houses stood.

The area around the Samouni household was one of the first areas that Israeli ground troops entered.

During the war on Gaza, 30 members of the Samouni clan were killed.  The attacks on their household and the killings have been widely documented, including in Richard Goldstone’s United Nations report.

With casts still on his arm and bandages covering up wounds on his stomach, he described through a translator the conduct of Israeli soldiers who entered into his house before it was destroyed.   Through a translator, he said occupying soldiers acted like they were going to execute him, poured gasoline on him and threatened to light him on fire, and stole jewelry from his house.

He was in the Shifa Hospital because he needed more surgical work done on his arm because it was broken in so many places, and just came back to Gaza after spending two weeks in Saudi Arabia for additional medical attention.