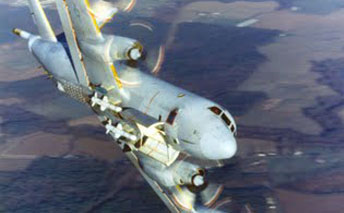 Caracas, Venezuela Jan. 9, 2009 — Yesterday’s violation of Venezuelan airspace by a P-3 U.S. military combat plane is another example of the escalation in provocations against Venezuela and evidence of the danger U.S. military presence in the region represents. During a live television broadcast on the evening of Jan. 8, President Hugo Chávez revealed that at approximately 12:55 p.m. earlier that day, a U.S. P-3 combat plane took off from the air base in neighboring Curaçao and entered Venezuelan airspace during a 15-minute period. Two Venezuelan F-16 planes intercepted the foreign military aircraft, prepared to escort it outside Venezuelan territory. “When the F-16 planes attempted communication with the U.S. aircraft, it immediately took off towards the north, but later it returned,” announced President Chávez. He said that at 1:37 p.m. Venezuelan time, the combat plane returned and flew for about 19 minutes inside Venezuelan territory. “It was escorted out and pressured by our F-16s, we didn’t have to bring in the Sukhois,” added Chávez.

The Pentagon has denied violation of Venezuelan airspace, yet the Venezuelan military has video and photographic images of the U.S. combat plane incursion yesterday.

Just days earlier, Venezuela’s Vice President Ramón Carrizalez had publicly denounced the intromission of a U.S. military plane also originating from the air base in Curaçao during 2009. The governments of Washington and Holland denied the violation, yet Carrizalez revealed an audio recording between the Venezuelan airport control tower and the U.S. pilot while inside Venezuelan airspace. The pilot stated clearly that he was flying a U.S. Navy military plane stationed at the base in Curaçao. He claimed ignorance as to the violation of Venezuelan territory, stating he was “unaware” he had entered an unauthorized zone. But the U.S. military plane hadn’t just merely crossed a border that some might argue is difficult to visualize, rather the pilot had flown over a strategic Venezuelan military base on La Orchila, a small island off Venezuela’s northern coast, clearly well inside Venezuelan territory. This was not an isolated incident.

Since 2008, Washington has been increasing its military and intelligence presence on the small Dutch island of Curaçao, where it maintains a Forward Operating Location (FOL) since 1999. The original contract between Holland and Washington stipulated use of Curaçao for counter-narcotics operations. But since Sept. 11, 2001, Washington began using its military installations around the world to combat “terrorist threats” and threats against U.S. interests, and in some cases, such as in Curaçao and Aruba, violating the terms of previous military agreements that only authorized counter-narcotics or humanitarian missions.

By 2006, U.S. operations from Curaçao were not just U.S. Air Force counter-narcotics missions, but a clear presence of U.S. Navy, Marines, Army, Special Forces and CIA had taken over the tiny Caribbean island. Together, the U.S. military and intelligence community components were conducting joint exercises and operations to combat a “potencial threat in the region.” At the same time, the Bush Administration was trying to brand Venezuela as a state sponsor of terrorism, despite the lack of any evidence to back such a dangerous accusation.

The arrival of U.S. aircraft carriers, war ships, combat planes, Black Hawk helicopters, nuclear submarines, and thousands of troops to the waters of Curaçao to participate in “joint exercises” caused alarm in the region. The Commander of the U.S.S. Stout, one of the war ships that docked in Willemstad during Spring 2006, declared to the Curaçao press on April 11, 2006, “…we are the most powerful Naval force in the world and the United States will defend its friends in the region under all circumstances.” Commander Thomas K. Kiss also exclaimed that his powerful ship represented “…a formidable presence to defend U.S. interests in the region.”

That was in 2006. In 2008, the stakes intensified. Washington formally attempted to place Venezuela on the terrorism list, though Congress didn’t approve the request because of oil dependence. But in July 2008, the U.S. Naval Fourth Fleet was reactivated after almost 60 years, to “demonstrate U.S. power and force in the region.” In 2009, a military agreement between Colombia and Washington was sealed, allowing the Pentagon to occupy and use seven military bases in Colombian territory and any civilian installation necessary. U.S. Air Force documents justifying the agreement and budget requests to improve Colombian military installations underlined the necessity to combat “…the constant threat of …anti-U.S. governments in the region” and to engage in Intelligence, Surveillance and Reconnaissance missions, as well as to improve the U.S. armed forces’ capacity to execute “Expeditionary Warfare” in the region.

In Dec. 2009, President Chávez denounced the detection of a U.S. drone plane that had violated Venezuelan territory from Colombia.

A Department of State publication from 2006 classified the Dutch islands of Aruba, Bonaire and Curaçao as the “The Third Frontier of the United States,” considering the Caribbean colonies part of the “geopolitical border of the United States.” In reaction to the growing U.S. military presence on Curaçao, a local journalist commented, upon visiting one of the U.S. war ships, “After leaving the war ship, we had the sensation that all of a sudden, we are now very important…”

Eva Golinger is a Venezuelan-American attorney from New York, living in Caracas, Venezuela since 2005 and author of The Chávez Code: Cracking U.S. Intervention in Venezuela (2006, Olive Branch Press) and Bush vs. Chávez: Washington’s War on Venezuela (2007, Monthly Review Press).

This article originally appeared on Eva Golinger’s blog, Postcards from the Revolution.