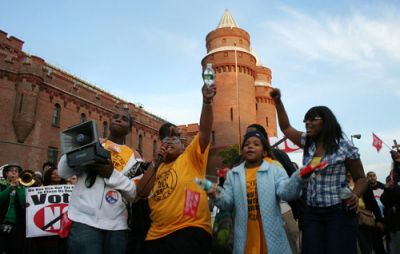 Members of the Kingsbridge Armory Redevelopment Alliance (KARA) watched in hushed suspense from the visitors gallery above the City Council chamber on Dec. 14.

After four years of building a grassroots movement to advocate responsible development in their community, they looked on as councilmembers voted on Mayor Michael Bloomberg’s plans to turn the Kingsbridge Armory, a 575,000-square-foot fortress-like structure in the northwest Bronx, into a lowwage shopping mall. When Council Majority Leader Joel Rivera (D-Bronx) finally announced the project’s defeat by a vote of 45-1, cheers rang throughout the chambers.

“This is a historic moment in the City Council,” said councilmember Charles Barron (D-Brooklyn). “I can’t remember any big project like this that the mayor initially wanted, that the council would go against in support of the people.”

Still, the mood was bittersweet. Though the vote marks a shift in the political landscape as Bloomberg begins his third term, this was not quite the victory that KARA and the City Council wanted.

KARA, an alliance of Bronx residents, churches and labor unions, was formed in 2005 after the Bloomberg administration launched its redevelopment plan for the armory. By 2009, KARA included 19 organizations led by the Northwest Bronx Community and Clergy Coalition (NWBCCC) and the Retail, Wholesale and Department Store Union. It garnered support from dozens of elected leaders, including the entire Bronx City Council delegation.

KARA was clear with the Bloomberg administration about the community’s vision: a binding community benefits agreement that included a mixed-use development with recreation and community space; schools on the surrounding property; union construction jobs with apprenticeship opportunities for Bronx residents; and for-profit businesses that pay workers a living wage of $10 an hour with benefits and respect for their right to organize a union.

This seemed like a reasonable request as the project’s lead developer, the Related Companies, was slated to receive more than $60 million in taxpayer subsidies for the $310 million project. Related claims it could not ask future tenants to pay the 1,200 or so retail workers in the proposed “Shops at the Armory” more than the minimum wage of $7.25 per hour.

Approximately 44 percent of retail workers in New York City make less than $10 per hour, according to the Fiscal Policy Institute.

Days before the vote, Bronx councilmembers tried to strike a deal with the Bloomberg administration but the mayor scuttled negotiations, giving the council no choice but to kill the project.

“Our billionaire mayor pulled the plug on the armory because he is against a living wage for workers, even though this project was to receive tremendous subsidies,” said Desiree Pilgrim-Hunter, KARA leader and executive board member of the NWBCCC.

KARA utilized a variety of tools to leverage the political establishment into opposing Bloomberg’s plan to redevelop the armory, including an independent traffic study that highlighted how the high volume of traffic to the mall would result in increased congestion and pollution in the surrounding communities. Councilmember Joel Rivera cited the findings from this report as one reason he voted against the project. Additionally, KARA encouraged its members to call and write letters to their councilmembers, urging them not to approve the proposed project unless Related agreed to sign a community benefits agreement.

The battle over the armory could catalyze a new living wage movement. On Dec. 20, labor and community activists protested outside the Queens Center Mall in Elmhurst. They demanded that the mall’s parent company, Macerich, require tenants to pay a living wage, allow retail workers to join a union without intimidation from their employer and provide more space to community functions. Most of the 3,100 retail workers in the mall are paid around the minimum wage despite $48 million in tax abatements Macerich received since 2004.

The next step in requiring retailers to pay living wages at projects that receive public subsidies is an ordinance proposed by Bronx Councilmembers Annabel Palma and G. Oliver Koppell. John Petro, urban policy analyst at the Drum Major Institute for Public Policy, said that, if passed, this ordinance “would completely change the way the city handles economic subsidy deals. It sends a clear message to companies that pay their employees poverty-level wages: If you want to benefit from public subsidies, you will have to pay a living wage.”

Diane Krauthamer is a communications assistant at the Retail, Wholesale and Department Store Union.