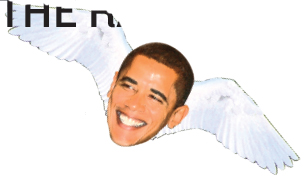 Can it be a year ago that we celebrated Obama’s victory? I danced in Harlem where cars honked like a wild jazz band. A woman climbed on a hood and screamed. People flooded the streets of cities around the world as a great love surged through us and swallowed the planet whole. In the midst of celebration I raised my arms and yelled, “This is who we really are!”

A year later, why do we still have faith in him? We hoped Obama would give us a “Green New Deal.” Instead he poured an ocean of public money into Wall Street, tripled the number of U.S. troops in Afghanistan and let A.I.G. executives reap more than $400 million in bonuses as Americans pitched tent cities and turned to food stamps. If John McCain had won and done any of this we’d be in the streets knocking down police barricades, but we won’t protest Obama.

Despite the evidence, we believe he’ll deliver us. Is this not the liberal version of faith-based politics?

The “we” here does not mean the left, wary as it is of electoral politics, but the millions of voters who saw in Obama a vehicle for their hope. The need to hope comes from our history. We are the result of European colonization and capitalist exploitation. We were raised to see brown skin as a metaphor of filth, and this inequality created a global reservoir of repressed desire. Obama’s historical victory was seen as the conduit through which this immense need for change could speak.

But the narrative-frames around his campaign betrayed us. A narrative-frame is the story that surrounds another story, and the story that surrounded his 2008 presidential election was that Obama is our liberal messiah. He was “The One” whom the people delivered to power and who in turn will deliver power to the people. And that’s why so many are blindly loyal to him. They are waiting for the Rapture.

Religion has long shaped political culture by providing roles for ambitious politicians. Obama played the role of the messiah with his soaring rhetoric of national healing and his slogan of divine election “We are the ones we’ve been waiting for.” It became official Democratic propaganda in January 2008 when Sen. Ted Kennedy, the Liberal Lion, put a rhetorical halo on the young senator’s head, “Every person he meets, every crowd he inspires, and everyone he touches generates new hope that our greatest days as a nation are still ahead.”

The messianic narrative was so overwhelming that McCain spoofed it in a campaign ad entitled, “The One.” It juxtaposed Obama’s heavenly rhetoric with clips of actor Charleston Heston as Moses parting the Red Sea. Obama joked about it at the October 2008 Alfred E. Smith roast, “I was not born in a manger. I was born on the planet Krypton and was sent here to save Earth.”

Against this backdrop, somber moments took on a religious glow. In February 2009 a black homeless woman named Henrietta Hughes begged Obama for help at a rally. He leaned over, kissed her on the cheek and told his staff to see to her. The video clip circulated on the internet like a miracle.

Popular culture also paved the way for Obama. Images of a black president have usually been a sign of progress. We see this figure in the 1972 film The Man, and more recently in Deep Impact, Bruce Almighty, Head of State and 2012. The Fox TV series 24 had two black presidents, about which lead actor Keifer Sutherland said, “If you show a population that it is possible to have African-American people in this kind of position of political power then people believe it’s possible.”

Ultimately we believed Obama because he is black. He must have felt how power works, the fear, the suspicious glances, the bubble one is trapped in or the expectation to perform tired roles.

The danger with the messiah narrative is that the audience plays a passive role. Change comes to us, not from us. The power of the messiah is in direct relation to the suffering of the people; hence they have more value as victims than as political agents. We see this in the healthcare debate when MoveOn.org enlisted R.E.M. for a song. A melancholy guitar jangles in the video “We Can’t Afford to Wait” as grim people bloated with chemicals, with tubes in their throats or surgical scars on their chests hold signs with their conditions. They are victims waiting for political deliverance.

If for liberals Obama is the messiah, for the right he’s the Antichrist of the New World Order. The right uses the narrative-frame of “barbarians at the gate,” in which the people must defend their homes from nefarious outsiders. Whether Obama is Hitler, a Muslim Manchurian candidate or the Antichrist, the goal of this narrative is to transform anxiety into racist paranoia that sunders the polity into an absolute “us” and “them,” and to enlist the audience as defenders of God and civilization. During last year’s “Tea Parties,” angry whites marched with signs saying, “Obama’s Plan: White Slavery.” It was a small indicator of the rise in militia group activity and race-based hate crimes.

As long as these two narratives exist, the political field can wobble left but will tilt right because the right offers people who are suffering a meaning to frame their pain. They say minorities or gays or foreigners or secular culture is the enemy, not the rich who stole their money. Until liberals join the left and offer both political vision and agency for the people, we will lose.

Obama wrote in The Audacity of Hope, “I serve as a blank screen on which people of vastly different political stripes project their own views.” We projected our desires on him and he became our mirror. It is a dynamic analyzed long ago by philosopher Ludwig Feuerbach, who wrote in The Essence of Christianity, “God is nothing else than man: he is, so to speak, the outward projection of man’s inward nature.”

Yet a single saving element should be extracted from faith in Obama. The glory we felt was not because of him, it was the incandescent reflection of ourselves we saw and loved. The euphoria of election night was evidence of the world within us. We are that powerful.

Instead of projecting our best selves outward we can focus on our actual lives. Weeks ago, I was at a store with a friend. She stacked her food on the counter and whipped out a food stamp card, paid and quickly put it in her purse. She stiffly walked ahead feeling how ashamed I was of her. When we sat down she said, “I didn’t want you to judge me.” I apologized too quickly and then put myself in her place. How scared she must be of the stigma pouring out of my eyes. How would I feel if I were ashamed to even buy food? I looked at her and apologized again and meant it. She leaned to me and said, “It’s okay.” She waited a moment and took out the food stamp card, “This is who we really are.”

For more on President Obama’s first year in office see “Let’s Break from the Party of War and Wall Street” by Stanley Aronowitz and “Hope Has Left the Building” by Arun Gupta in this issue of The Indypendent.