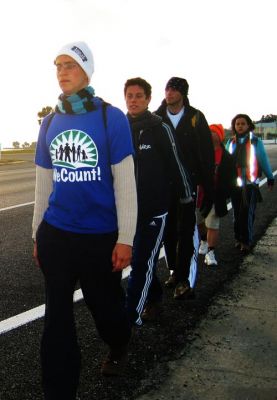 Miami-Dade Community College student Felipe Matos has a new schedule this spring semester. Each day starts with a 5:30 a.m. wake-up call, a big breakfast, a quick stretch and securing his feet with a thick layer of duct tape. Then Matos sets off for a 17-mile walk interspersed by several breaks of singing songs, and later stops to sleep in a different place every night — RVs, churches or even strangers’ homes.

The thick blisters that have developed on his feet after walking 250 miles beg him to stop. But this semester of learning has only just begun. Along with three other immigrant students, Matos, 23, is trekking 1,500 miles in a five-month campaign that launched Jan. 1 from Miami and will end in Washington, D.C., to rally in support of “education not deportation” for undocumented youth and their families.

“It was hitting home and it was time for us to get up and act,” said Gaby Pacheco, 25, an undocumented immigrant living in Miami, whose family is in deportation proceedings. “Our communities couldn’t wait anymore,” said Pacheco, a music therapy student at Miami-Dade College.

Four youth will walk the entirety of the trip — Pacheco, Matos and two other students, Carlos Roa, 22, an architecture student at Miami-Dade, and Juan Rodriguez, 20, who recently became a permanent resident and hopes to study sociology in Chicago.

Named the “Trail of Dreams,” the walk has four guiding goals: a pathway to citizenship, greater access to education, workers’ rights and the end of the separation of families. The campaign was launched by Students Working for Equal Rights, the Florida Immigration Coalition and Presente.org, a group that works to promote the political empowerment of Latino communities.

“It’s courageous and inspiring what these young people are doing,” said Norman Eng, director of media relations at the New York Immigration Coalition. “It’s been a very effective way to highlight the plight of immigrants like themselves. I think we’re all marching with them in spirit.”

The Trail of Dreams comes at a time when immigrant-rights groups across the country have mobilized to reinvigorate the push for the Development, Relief and Education for Alien Minors Act (DREAM Act) introduced in 2001 to offer a route to legal residency to graduating undocumented high school students living in the country for more than five years.

A report by College Board Advocacy, “Young Lives on Hold: The College Dreams of Undocumented Students,” found that 65,000 undocumented students living in the country for more than five years graduate from high school annually. While they can legally attend most colleges, they are not eligible for financial aid.

The laws vary by state and are a source of confusion due to constantly fluctuating state and local policies. Only 10 states allow undocumented students to pay in-state tuition rates. Current New York policy states that undocumented youth need to be enrolled in an in-state high school for two years to be eligible for in-state tuition. Higher education is just not an option for many undocumented students who have no access to financial aid and no legal authorization to work.

The Trail of Dreams marchers stop every day at lunch to meet with churches, organizations, schools and state and local representatives to exchange stories of struggle and words of hope.

“Listening to little children that [are] five that understand that their parents could get deported and they could be torn apart from them,” said Matos, is so far proving to be the hardest part of the journey.

While the march is inspiring organizations nationwide to continue working for comprehensive immigration reform, the organizers say they are not campaigning for any specific law or policy.

“What we’re setting out to do is change the hearts and minds of people,” Pacheco said.

Still crossing through northern Florida, the four students will continue to walk until arriving in Washington on May 1, a national day of worker and immigrant rights.

“We’re coming out of the shadows, we’re going into the light and saying, ‘Here we are, the undocumented youth that have so much potential and so much desire to make this country a better country.’”