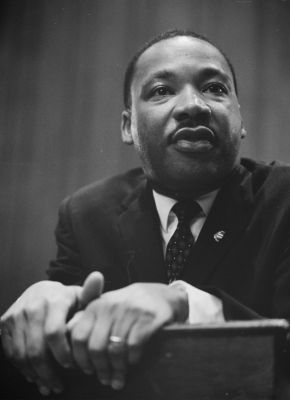 Today is Martin Luther King, Jr.’s birthday, not the national holiday which is Monday. As an activist member of Jewish Voice for Peace, I have at times faced counter-demonstrations while I speak out against unjustifiable atrocities being committed allegedly for me and by “my” side.

Being from the United States, I could be doubly responsible for the U.S./Israeli treatment of the Palestinians. As a long-time member of the War Resisters League, King and I share a belief that (in his words) “social change comes more meaningfully through nonviolence,” that the “business of burning human beings with napalm, of filling our nation’s homes with orphans and widows, of injecting poisonous drugs of hate into the veins of peoples normally humane, of sending men home from dark and bloody battlefields physically handicapped and psychologically deranged, cannot be reconciled with wisdom, justice, and love,” and that God didn’t choose “America as his divine, messianic force to be a sort of policeman of the whole world.” Forty-two years have passed since he was assassinated.

So I am perplexed when I see “pro-Israel” signs that extol King’s defense of Israel, using quotes (which I also am fond of doing) by the late revolutionary, but in their case, highlighting things he said that seem to place him on “their” side of the police line, not mine. On the occasion of his birth, newsletters of synagogues may even have articles touting King as a staunch defender of Israel’s right to defend itself. They take quotes from 42 years ago as I do, to make our points. Certainly, after the Six Day War of 1967 (and before), King defended Israel. However, events of the last two score years I think would have reinforced King’s pacifism and “eternal hostility towards militarism, racism and economic exploitation.” He never would have become an anti-Semite, but I do think facts on the ground would have led him to become quite critical of Israel. I want to briefly mention five specific issues that would have negatively affected King’s perspective on Israel:

1. Regarding nuclear weapons and disarmament: as a critic of nuclear weapons, he would have pushed for real steps on the part of the United States on this issue. He would have opposed ALL states building nuclear weapons, U.S. allies or not. Israel has a formidable nuclear arsenal and delivery system even though it and the United States refuse to admit it. Israel has nukes, and King wouldn’t have been fooled or supportive of the lie of omission. As he said, “In international conflicts, the truth is hard to come by because most nations are deceived about themselves. Rationalizations and the incessant search for scapegoats are the psychological cataracts that blind us to our sins. But the day has passed for superficial patriotism. He who lives with untruth lives in spiritual slavery. Freedom is still the bonus we receive for knowing the truth.”

2. Israeli support for apartheid in South Africa would certainly have given King pause. Maybe he would have been able to help change Israeli (and U.S.) policy, but he certainly would have pointed out that supporting the horrific racism of South Africa was wrong, in the extreme. He would have seen Jews and some Israelis take anti-racist stands, but as a whole, and on a governmental level, he would have had much to rebuke.

3. Israel has been singular in its support for many of the worst aspects of U.S. foreign policy, like covert actions undermining democratically-elected governments. Against oppressive regimes, he would have supported nonviolent actors. Actions he spoke against while denouncing the Vietnam war continue. Again, quoting King, “A nation that continues year after year to spend more money on military defense than on programs of social uplift is approaching spiritual death.”

4. I don’t think King would have laid all or even most of the blame on the Palestinian people for the unresolved catastrophe they have suffered. He would not have supported efforts to punish all the people of Gaza trying to make them turn on Hamas (a democratically elected party, like it or not). He would have supported conscientious objectors like the Shminitsim and the former fighters of Breaking the Silence and Combatants for Peace. He would see Palestinian homes being demolished or forcibly occupied by religious zealots (alá Hebron) and say that it was not just. He would surely have supported nonviolent Israeli and Palestinian initiatives and would have sympathized with people being shot at, imprisoned and abused for speaking out or demonstrating against the wall. He would have had solidarity with the people of Sderot, many of whom denounced Operation Cast Lead. He would have cared about every dead and injured person, but he would maybe have thought that the numbers also had an important story to tell. He would have denounced ALL war crimes, crimes against humanity and collective punishment committed in or from Gaza. He would hear appeals from Christian Palestinians and Palestinian civil society and be moved.

5. The second class citizenship that Israeli Palestinians have with their separate and unequal treatment by the State would have appeared eerily reminiscent of the occasion for lunch counter sit-ins and bus boycotts in the South. Even if they have more rights than people in many Arab states, such partiality makes a mockery of democracy. Would King be more likely to stand with Avigdor Lieberman and Ehud Olmert, or Bishop Desmond Tutu and Nelson Mandela?

I certainly don’t think King would have become an anti-Semite, but he may have become an anti-Zionist. They are not the same thing. “The truth must be told, and I say that those who are seeking to make it appear that anyone who opposes the war in Vietnam is a fool or a traitor or an enemy of our soldiers is a person that has taken a stand against the best in our tradition.” That is a quote of his that I have no doubt could be accurately updated to go beyond mention of Vietnam and include every military adventure subsequently waged by “the greatest purveyor of violence in the world today–my own government,” including the U.S./Israeli occupation of the Palestinian Territories.

This article originally appeared on Jan. 15 on WagingNonviolence.org.