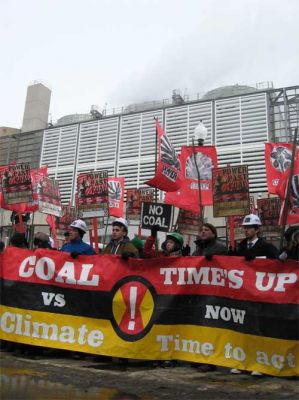 As the U.N. climate change summit in Copenhagen ended last December without a legally binding agreement, environmentalists, government officials and activists are asking if an international agreement is the best way to address global warming.

Many participants and observers acknowledge that Copenhagen brought an unprecedented level of attention to the issue of global warming. The U.N. climate change conference was one of the biggest global summits ever held, with all 192 U.N. member states and 119 heads of state attending.

Discussed, too, was the maximum temperature increase that should be allowed to occur. The U.N. Intergovernmental Panel on Climate Change (IPCC ) argues that global warming should be limited to 2 degrees Celsius over 1990 levels.

Yet some nations pushed for lower temperatures, noting the devastating effects a 2-degree rise would mean. Dessima Williams, chair of the Alliance of Small Island States, many of which would disappear underwater from even a modest rise in sea levels, called for a 1.5 degree maximum. Lumumba Di- Aping, head of G77 (which represents 130 nations), said because of regional variations a 2-degree increase globally would result in a 3-degree increase in Africa, which he termed “a Holocaust for Africa.”

Scientists, such as James Hansen of NASA’s Goddard Institute for Space Studies, warn that if no action is taken, the planet could heat by 4 to 7 degrees over the course of this century.

As for reductions in emissions, African nations were demanding a lowering of 40 percent from 1990 levels by 2020, which dovetails with the 25 to 40 percent range recommended by the IPCC .

As part of the Copenhagen Accord that was produced at the summit, nations were asked to voluntarily declare by Jan. 31, 2010, how much they would reduce emissions by 2020. So far, 68 nations have issued pledges, accounting for over 78 percent of global emissions.

Norway proposed the biggest cut at 30 to 40 percent and was followed by Japan, which proposed a 25 percent cut. The EU proposed 20 to 30 percent, and Russia offered 15 to 25 percent. All of these offers were based on 1990 levels.

Other nations, however, proposed far less: the United States and Canada offered a 17 percent cut based on 2005 levels and Australia offered 15 to 25 percent reductions based on its emissions in 2000. Adjusted to 1990 levels, these nations are offering a 3 to 4 percent reduction.

WHERE DO WE GO FROM HERE?

While some continue to tout the momentum that these commitments show — looking forward to the next U.N. climate change summit taking place in Mexico from Nov. 8-19, 2010 — or to argue for the importance of international agreements to resolving climate change, others are not so sure.

Patrick Bond of South Africa’s Durban Group for Climate Justice, says that the Copenhagen Accord has three significant failings. It does not ensure sufficient cuts of 45 percent by 2020; it does not acknowledge climate debt to less developed countries (which he says should amount to $400 billion a year by 2020) that account for little if any of the carbon emissions over the last 250 years; and a compact should include the decommissioning of carbon markets.

Lester Brown of the Earth Policy Institute, also, argues that international agreements will not solve climate change. “I think, and this might surprise some, that international climate agreements might be obsolete. It takes years to get them in an agreed-upon form for presentation and then ratified. I don’t think we should count on Copenhagen to save civilization. We’re in a race between natural tipping points and political tipping points.”

Brown says, “What I see when I look around the world are movements that are promoting change without waiting for international agreements. For example, I look at the extraordinary powerful movement in the United States to ban coal power. They did not say we have to wait until Europe agrees or Russia agrees. They did what they thought needed to be done.”

When California Gov. Arnold Schwarzenegger delivered his address in Copenhagen, he encouraged international agreements but said they will not be enough to combat global warming.

In 2006, in the first statewide mandate in the United States (known as Assembly Bill 32), Schwarzenegger committed California to a 25 percent cut in greenhouse gas emissions by 2020 based on 1990 levels. While California is the twelfth largest emitter in the world, 66 percent of Californians are concerned with global warming.

Terry Tamminen, former head of the California Environmental Protection Agency and an adviser to Gov. Schwarzenegger on energy and the environment, says, “I think Copenhagen revealed that it’s tough to get 192 countries to agree. It highlights what cannot be done. Assembly Bill 32, however, highlights what can be achieved. Aside from what it legislated for the state, it led to numerous regional efforts: the Western Climate Initiative, which led to the Midwestern Greenhouse Gas Accord.”

Tamminen names just a few of the agreements designed to set regional limits for GHGs. The Western Climate Initiative consists of seven western U.S. states and three Canadian provinces; the Midwestern Greenhouse Gas Accord includes six Midwest states and one province. And there’s the Regional Greenhouse Gas Initiative, which encompasses 10 Northeastern states and two provinces. Additionally, Schwarzenegger is committing California to obtaining 33 percent of its energy from renewable sources by 2020, up from 13 percent currently. Currently, 29 U.S. states have established targets for renewable energy production despite the lack of a national target.

Given the legislative gridlock on reducing emissions federally, others are seeking to initiate change locally and from the ground up.

In the United States, the fight against coal offers the greatest potential for mitigating global warming. Hansen says due to its high rate of greenhouse gas emissions, coal “is 80 percent of the solution to the global warming crisis.” He has called for coal to be phased out by 2030, in order to avert climate change.

The United States has the largest coal reserves internationally followed by Russia, China and India.

In May 2007, there were plans to build 151 coal-fired power plants in the United States. Ted Nace, author of Climate Hope: On the Front Lines of the Fight Against Coal and founder of CoalSwarm, an online information source on coal, says that groups have stopped 95 of these proposed plants.

Nace is optimistic about the fight against coal, indicating ending coal production and usage would go a long way toward solving the climate crisis. “At this rate, the ‘coal problem’ will be solved well before the 2030 deadline,” Nace said.