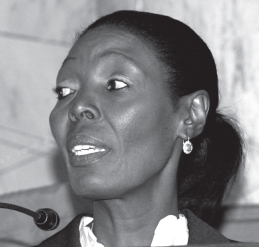 Huddled around the lantern’s glow in the middle of the night, a group of teens rap lyrics to the beat of the tambora. The light reflects on their faces as they sing about the Haiti that is to come, a stark contrast to the rest of Haiti that remains dark.

It is 3 a.m. in the tent city of Leogane, on the outskirts of Port-au-Prince. “This is how we stay awake throughout the night, rotating shifts and singing songs,” says Sonia Pierre, about the student volunteers who stay awake at night to help provide security in the aid camps. Pierre, a long-time human rights advocate for Domincians of Haitian descent in the Dominican Republic and founder of Movement of Dominican Women of Haitian Descent (MUDHA ), has organized response teams into the worst hit and hardest to reach areas of Haiti to deliver food, water and medical aid.

When the earthquake hit, Pierre was at home in Santo Domingo. “I felt compelled to go,” Pierre says, “the anguish kept me awake.”

Within 48 hours, Pierre had mobilized a team to head into Haiti. Now seven weeks later, she has continued her effort sending in teams every 15 days. Working with partner organizations, New York City-based Haitian Women for Haitian Refugees and Socio-Cultural Movement of Haitian Workers in Dominican Republic, they have delivered several trucks full of medicine, food, mattresses, tents, portable stoves and water.

“Our response was to get aid down there immediately, because a lot of times these bigger organizations spend more time raising money and tend to cluster in places that are not the hardest hit,” said Ninaj Raoul, cofounder and director of Haitian Women for Haitian Refugees, of the latest mission.

Pierre has long championed human rights on the island. At 13, she was arrested for her role as a spokesperson at a demonstration on behalf of braceros, Haitian sugar-cane cutters living in migrant bateyes, labor villages in Dominican Republic. Today with MUDHA , she defends the rights of women by promoting labor rights, healthcare and legal education. In 2006, Pierre was awarded the Robert F. Kennedy Human Rights Award for her work. Her experience gives her an intimate knowledge of the rural areas and communities throughout Haiti.

Trekking into remote areas in search of shack villages built beyond the main roads, the team designates areas of need and coordinates the logistics of how to organize thousands of people into workable groups to put up tents, distribute food and water, and provide medical aid. The teams can only work in the field for two weeks before needing to return the Dominican Republic to resupply.

In these outdoor bed-sheet cities, security remains very limited especially at night when women and children are most vulnerable. Pierre says that she has not seen the U.S. military visit the “tent cities” at night, despite the fact that the soldiers are well armed and able.

“They are not providing the security that was promised,” Pierre says, noting incidents of beatings, thefts and rapes of women. “What this does is to compile the emotional trauma onto an already devastated community.” In response, MUDHA takes on the challenge of organizing sustainable security efforts in the aid camps.

Pierre’s team is also providing emotional and psychological support. Along with providing counseling, the team organizes soccer, volleyball and domino tournaments. “Reintroducing them to daily activities is paramount after a trauma-inducing experience such as this,” Pierre says.

Having lost their parents, the children in the makeshift orphanages are in urgent need of surrogate care, a huge undertaking for temporary volunteers. At night, the kids do not want to sleep alone. “We take turns lying down with them, holding them in our arms — keeping them from crying, helping them to fall asleep. The smaller ones, unable to understand that the sheets would not crush them, kept asking whether the walls would come tumbling down. “The most difficult moments are those times when we have to leave the camps.” Pierre says, “Many of the children are sobbing and run to hide.”

These stories of need coming out of Haiti have sparked a wave of solidarity. In New York City, home of some of the largest populations of Haitians and Dominicans outside of the island, various groups have converged to offer support to these grassroots initiatives on the ground.

One such group, The Haiti Support Committee, seeks to provide supplies and funding needed to keep afloat organizations like MUDHA and Fundación Todo por la Salud, which organizes medical missions to impoverished towns in Haiti. Alba Mota, a committee coordinator, says they are organizing a March 27 fundraiser for the two organizations.

“We hope to build a bridge and show solidarity with organizations working in Haiti,” Mota says.

For more of the Indypendent’s coverage of Haiti from the current issue:

“Compassion of the Church: Springing Faith into Action for Haiti,” By Jaisal Noor, Feb. 19, 2010