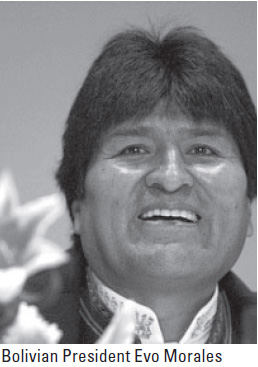 Four months after U.N. climate talks dominated by the world’s leading polluters broke down, the indigenous-led government of Bolivia will host a people’s conference on climate change.

“This Conference will be a transparent and inclusive event, in which no one will be marginalized,” said David Choquehuanca, Bolivia’s Foreign Minister, who expects 5,000 foreigners to attend the event, which will bring together citizens, social movements, scientists and officials from other developing nations.

The World Peoples’ Conference on Climate Change and Mother Earth Rights will be held in Cochabamba, Bolivia, from April 20-22. Climate change is a pressing issue in Bolivia where retreating glaciers threaten the future of the Andean nation’s water supply.

Organizers of the event are looking to draft a universal declaration of environmental rights similar in spirit to the Universal Declaration of Human Rights that was written in the aftermath of World War II.

They will also seek to develop strategies to push developed nations to make deep cuts in their carbon emissions and pay their “climate debt” to poorer nations like Bolivia that are least responsible for the climate crisis but will experience the brunt of its impact in the coming decades. Climate justice advocates say developed nations should provide hundreds of billions of dollars per year in financial and technological assistance to help developing countries adapt to the challenges posed by climate change.