On New Year’s Eve in 2004, nine months before Hurricane Katrina hit, bouncers in the Bourbon Street club Razzoo’s killed a black college student named Levon Jones. The outrage led to near-daily protests outside the club, threats of a black tourist boycott of the city and a mayor’s commission to explore the issue of racism in the French Quarter. Despite widely publicized advance warning, a “secret shopper” audit of the Quarter found rampant discrimination in local businesses. Bars had different dress codes, admission charges and drink prices–all based on whether the patron was black or white. 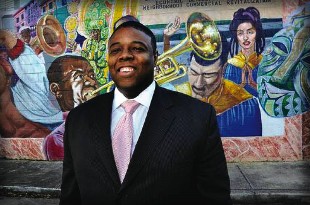 The election will be on Saturday, Feb. 6 (with a run-off in March if no candidate wins more than 50 percent) and is shaping up to be an historic milestone in the city’s post-Katrina political realignment. After more than 30 years of black mayors, the best-funded and highest-polling of the 11 candidates in this election, Mitch Landrieu, is white, and the seven-person city council may be heading towards a 5-2 white majority.

Outside of New Orleans, progressives and liberals are excited about Perry. They’re receiving emails, Tweets and Facebook updates about his progressive platform. But in New Orleans, the candidate seems relatively unknown.

That’s surprising given Perry’s work over the years. Since Hurricane Katrina, he’s testified before Congress about the obstacles to rebuilding New Orleans and the larger Gulf Coast region. He’s also overseen lawsuits and reports that have challenged housing discrimination in the city and its surrounding suburbs. A charismatic speaker with a broad and deep knowledge of the issues facing the city, Perry has raised hundreds of thousands of dollars–mostly through small donations–over the last year.

According to polls, though, his campaign hasn’t caught on with voters, many of whom still don’t seem to know about his accomplishments. “I think people don’t know that James was behind all those things,” said political consultant Vincent Sylvain, who’s not working with Perry’s campaign. “You have to remember that when he engaged in these fights it was not for glory.”

Political analyst and Xavier University professor Silas Lee agreed that Perry’s candidacy seems to have not caught on with voters. “The public seems less receptive to a candidate with less political experience,” he said, explaining that this tendency has made people lean towards Landrieu, a Democratic candidate who has advertised his connections in Washington, D.C. and Baton Rouge as important assets.

With many of the city’s poor people dispersed, analysts like Sylvain question whether a progressive candidate can win in the new New Orleans. Perry is campaigning hard, appearing at several events every day and striving to fundraise enough to be competitive. “We have to challenge this system,” he said in an interview at the city’s Urban League office after the fourth major debate in three days. “And if we don’t get a progressive mayor, I don’t know if we ever challenge the system in a real way.”

Social justice activists in the city note that he’s the only candidate to talk about the city’s problems as systemic. Discussing the city’s tourism-based economy, Perry said: “New Orleans has a system that is almost designed to be oppressive.” He described a workforce subsisting on minimum-wage jobs and a public housing system that subsidizes employers who pay unfair salaries. “If we paid people a living wage, then we could really transform our city,” said Perry.

A native New Orleanian, Perry founded a fair housing center in Mississippi before becoming director of the Greater New Orleans Fair Housing Action Center in 2005. His central promise is to reduce the city’s murder rate by 40 percent in his first term, saying he would do this by focusing the police department’s resources on what he says are “one or two hundred individuals” who are responsible for most of the violent crime in the city and away from the nonviolent offenses that he says the department currently focuses on. He said that if he was elected and did not meet his promised goal he wouldn’t run for re-election.

Perry has also promised to attack blight by “making sheriff sales a priority,” as well as offering homeowners counseling and financial assistance to help them keep their homes.

After eight years of Nagin (who is prevented by term limits from running again), dissatisfaction with the mayor is at the highest point in the history of mayoral polling in New Orleans, and the electorate seems ready for a new direction. Perry represents a marked change from Nagin, who was the city’s first businessman mayor.

For Perry’s supporters, the lack of local traction has been frustrating. He’s racked up some high-profile endorsements from national figures like Henry Louis Gates, Jr., musical legend Dr. John and Phoenix Suns All-Star Grant Hill. The Nation magazine endorsed him, and Philadelphia Mayor Michael Nutter hosted a benefit for him, but no Louisiana politicians have stood up to support his campaign.

Perry supports the right of gays and lesbians to marry legally, but the city’s LGBT organizations have endorsed other candidates or stayed silent. The Forum For Equality PAC, the largest of those political organizations, made a joint endorsement of two other candidates with less progressive positions on gay and lesbian issues, leaving some onlookers to think that they’re hedging their bets with the candidates that seem more likely to win. “I’ve taken on cases on behalf of the LGBT community many, many, times,” says Perry. “Forum for Equality’s decision puzzles me. But it doesn’t change my resolve.”

While Perry’s writing has been featured in national publications and on the Huffington Post blog–often with his partner, Melissa Harris Lacewell, a scholar and regular guest on MSNBC–he’s received little local media attention. In fact, many observers say that the local daily paper has decided that Landrieu has already won, and national press like the New York Times have followed their lead.

Mayoral candidate Troy Henry, a former Enron executive who polls say is leading among the black candidates, has criticized the press coverage of the campaign, which he says has anointed Landrieu the front-runner and declared the election all but decided. At a recent news conference, Henry told the assembled print and television reporters: “There’s not an African American among you in the press today. How you interpret what you say and how African American candidates like myself interpret what you say is different.”

With 11 candidates running for mayor, political ads blanketing the airwaves, and political yard signs posted all over town, the race is clearly not decided. Adding to the unpredictability, the election falls not only during Mardi Gras season–a time of parades, balls and festivities around the city–but also the same weekend that the city’s enormously popular football team, the Saints, will be playing in the Super Bowl.

Landrieu, the current Lieutenant Governor and brother of Louisiana’s U.S. Senator, does hold a commanding lead in most polls. This is Landrieu’s third run at the office, which was held by his father from 1970-1978. The elder Landrieu was the last white mayor of New Orleans and is often credited with integrating city hall.

Landrieu’s father ran city hall during a time of changing demographics in New Orleans. Through the 1960s and ’70s, as integration took hold, the city’s white population fled to the suburbs. The white population of New Orleans dropped about 160,000 from 1960 to 1980, while the black population increased by 40,000. The city became, as Mayor Nagin famously said in 2006, a “Chocolate City.”

In the aftermath of Katrina, the trend has in many ways reversed.

Although the exact changes in New Orleans’s population will not be known until after this year’s Census is completed, the city seems to have lost tens of thousands more black residents than white residents.

On WBOK, a black-owned radio station that has become the unofficial voice of black politics in the city, callers expressed fears that white New Orleanians are making a political power grab. The station’s morning call-in show is dedicated almost exclusively to the issues around the upcoming election, and it offers a helpful if unscientific perspective on the community’s feelings about the upcoming election.

Listening to the show or reading the pages of the city’s three black-owned newspapers, it appears that Perry has failed to catch on among black voters. Perhaps this is because he is not as well-known as Landrieu and doesn’t have the deep pockets of businessman candidates Troy Henry and John Georges, who have less than $500,000 combined in contributions but have supplemented that total with $1.9 million in personal loans to their campaigns. Perry comes from outside of the city’s black political power structure, having never worked for a political campaign before or held an elected office.

Many voters feel that, at 34, Perry is too young for the position, but this hasn’t hurt him with everyone. Yvette Thierry, the lead organizer with Safe Streets Strong Communities, a grassroots criminal justice reform organization, said that Perry’s youth is an advantage. “We need new voices and new ideas,” she said, adding that she is still an undecided voter.

Sylvain agreed that his age does not have to hold Perry back. “I don’t think James has done a good enough job of reminding people that when [former mayor] Marc Morial took office, Marc was only 35,” said Sylvain. “And that has probably been a failure of his campaign.”

To Perry, one of his biggest obstacles is a class divide in the black community.

“There are folks who are really focused on the interests of the wealthy and upper-income African American community, and then there are folks like me who are focused on low-income communities and focused on really answering the question of why people are poor and transforming our community.” Perry believes that his work for social justice will catch on with voters by election day, even if the city’s power structure is ready to count him out.