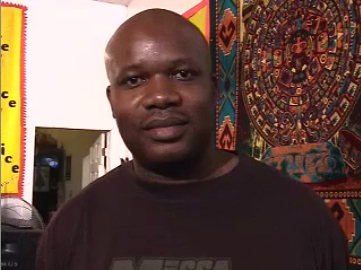 On Jan. 24, long-time community activist Jean Montrevil was released after being detained by U.S. Immigration and Customs Enforcement (ICE) for three weeks. Montrevil, a leader in the Haitian-American community, was detained, and ordered to be deported, after attending a routine ICE check-in Dec. 30. The deportation was ordered for a 20-year-old drug conviction for which Montrevil had already served 11 years. The New York City community rallied in support of Montrevil’s release, holding protests and demonstrations on his behalf. The Indypendent recently caught up with Montrevil and the Rev. Donna Schaper, Senior Minister at Judson Memorial Church, who helped lead the effort for his release.

Jaisal Noor: How does it feel to finally be released after three weeks in detention?

Jean Montrevil: Well, I’m very happy to be home with my kids and my wife and my family. You know, at the same time we left [detention], I left 25 Haitians behind who can’t get released until they spend ninety days or have their case reviewed. And I’m the lucky one, you know. I feel lucky that I had so many people supporting me, from elected officials and the clergy members and my church behind me. But at the same time it’s really a mix of emotions where you have, your country right now is being destroyed, being totally destroyed, two million people homeless, and then the United States, this country who, who talks about human rights in other countries, who judge other countries about human rights, and wanted to lock me up. I’m very disappointed on Obama, very disappointed. Hopefully, with this movement we can really highlight the destruction of families [through deportation] and what’s happening in this country.

JN: The Obama administration has decided to grant Temporary Protected Status (TPS) to Haitian-Americans currently in the United States for 18 months. What else can Obama do to help Haitians after the earthquake?

JM: As a Haitian, we’ve been trying to get TPS for a long time. And now, with the world’s worst disaster, Obama had the opportunity to really show the kind, American spirit and share the country’s prosperity. He really had an opportunity to do the right thing. Giving TPS for 18 months is unacceptable. People are still going to be afraid of coming out of the shadows just for 18 months. I think Obama can do more for the Haitian people and he can serve the American people better.

JN: As someone who sends remittances back home to Haiti, how important is the food and money you’re able to send to relatives there?

JM: The money that we send back home is the biggest source of income for Haiti. The United States knows it. The world knows it. So I can tell you that my brothers, my friends, they’re depending on money that I send to them to live, and so are millions of Haitians. So, giving people TPS is an opportunity to get a social security card to go to work and then have an income and be able to send money back home. And one of the stories that’s coming out right now in Haiti is the long lines at Western Union. My friend who’s in Haiti told me that his sister sent him some money. He could not go and get it because the line of the Western Union in Port-au-Prince, Haiti, of which they only have two was seven blocks long.

JN: You were telling me earlier that you just got word from a friend back home that some of the food you recently sent ended up being extremely important after the earthquake.

JM: On Christmas Eve, I sent him food: 110 pound bag of rice, 50 pound bags of beans, two dozen sardines, spaghetti, a case of milk, oil, and charcoals to cook. And with that food, he split it in half and gave it to my brother. On Sunday he was telling me how grateful he was. If it wasn’t for that food how him and his wife and his kids were going to probably starve. And that same food that I sent he had to share it with his neighbors because their neighborhood didn’t have food to eat after the earthquake because the supermarket was closed.

JN: Rev. Schaper, what is your reaction to Jean’s detention and subsequent release?

Donna Schaper: There are thousands of people like this, and we do believe that the American people are good-hearted enough to say, “Wow, that can’t be. We don’t want that.” So what we did was to mobilize our hearts, our community, our elected officials. We had phenomenal support from the elected officials in New York City — Congressman Nadler, Congresswoman Velasquez, Congressman Rangel. We had people who wrote and wrote and called and called, and then we called ICE every day.

It’s not just about Haitians, and it’s not just about Jean. Jean’s gonna have survivor’s guilt because there are 26 other Haitians who aren’t out, and there are lots of Chinese and Dominicans and Russians and Irish who are being treated inhospitably by this great nation. So we want the nation to repent, to change, and we’re just trying to let people know because we do believe that if people knew how bad this was they’d wake up.

JN: Even before Haiti was devastated by the earthquake, eight out of 10 Haitians were surviving on less than $2 a day. After the disaster, the amount of poverty in Haiti has skyrocketed. What should the United States’ role be in helping Haiti, and what do you think of the United States allowing Haitian refugees to enter the country?

DS: There is no reason not to welcome people here, and immigrants of all kinds, including Haitians, make extraordinary gifts to this nation. They build us up culturally. They build us up morally. They build us up economically. They are gifts. So I welcome gifts, and particularly under the circumstance of what’s gonna happen. I think we need to bring as many people in as possible. We also need to facilitate the leadership of the Haitians for themselves and not have a lot of bureaucracies and a lot of international aid agencies who think they know what’s best for Haiti. I’m particularly concerned about the people understanding the history of Haiti. It’s not like the United States didn’t have a hand in the poverty and devastation and deforestation that was already there. It’s not like the forced urbanization to Port-au-Prince did not hurt people. You know, in a way it’s tragic how stupid and lacking in common sense, not to mention morality, we are when it comes to helping people help themselves. Haiti’s perfectly capable of taking care of itself, and we need to get resources there and then get out of the way.