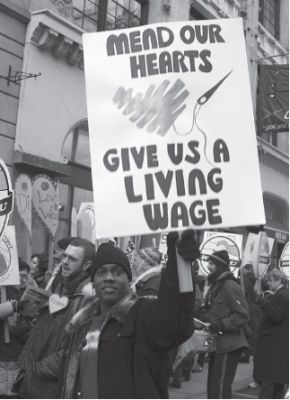 There are thousands of fashion victims in New York City, but not due to a lack of style. Rather, these are the low-wage workers in the fashion industry who stock, cashier and provide security at high-end fashion stores. Now, these workers are fighting back against stolen wages and hazardous working conditions at several Manhattan businesses.

In a battle that has lasted more than three years, many current and former employees of Shoe Mania and Mystique Boutique are organizing to receive unpaid wages, overtime pay, minimum wage and better working conditions.

These retail workers, supported by community groups, labor leaders and elected officials, protested against two companies in the “March of Hearts” down Broadway in SoHo on Feb. 3. The rally was organized by the Retail Action Project, a community-labor partnership of the Retail, Wholesale and Department Store Union and Good Old Lower East Side (GOLES).

“Here on Broadway, the wealth of the world lines the windows, while the people who make that wealth are starved and stolen from,” said Damaris Reyes, GOLES executive director. “We want retailers to know that those who violate wage and hour laws are not welcome in our community.”

At its seven SoHo locations, Mystique currently employs some 90 sales, stock, cashier and security workers. Current and former employees claim their labor rights have been violated repeatedly in the past six years, and are owed more than $2 million in wages from minimum wage because they were illegally denied overtime pay.

“I would sometimes work for more than 60 hours per week … and [with] no overtime [pay],” said former Mystique Boutique employee Carolina Ferreyra. “I started getting an attitude about it, [and] that’s when I got fired.”

Current and former Mystique Boutique security and stock workers report putting in 66-hour work weeks, while working for as little as $5.15 per hour — $2.10 below the legal minimum wage. In other cases, particularly among sales staff, workers say that they received the regular hourly pay for hours worked in excess of 40 hours, instead of the legally required overtime pay of time-and-a-half. There is an ongoing investigation by the New York State Attorney General’s Office into the workers’ claims at Mystique Boutique.

Shoe Mania is a New York City-based shoe retail chain with four Manhattan locations that currently employs approximately 100 non-clerical sales, stock, cashier and security workers. Many workers say they have been illegally underpaid and failed to receive overtime pay due to them. Nearly 150 current and former employees have joined in multiple collective action lawsuits throughout 2009 against the company seeking approximately $3 million in damages.

“For over three years, I worked at Shoe Mania [for] 11 hours a day, six days a week,” said Ahmed Dalhatu, a former stock worker at the recently closed 11 West 34th St. Shoe Mania store. “Whenever I got my paycheck, it would only show that I worked 40 hours per week.” Shoe Mania workers also report being forced to work long hours in dirty and dimly lit basements without sufficient break time.

Shoe Mania and Mystique employees are not alone. According to a recent report issued by the National Employment Law Project, “Working Without Laws: A Survey of Employment and Labor Law Violations in New York City,” 21 percent of low-wage workers in New York City are paid less than the minimum wage. More than one-third of workers report that they are forced to work overtime, and in 77 percent of these cases, they are not paid overtime. Additionally, 29 percent of the workers surveyed are subject to “off-the-clock violations,” whereby companies will ask workers to show up early or stay late, without being paid for that part of their working time. In real numbers, the Project estimates that in any given week, more than 300,000 low-wage workers in New York City are victim of at least one pay-based violation and, as a result, workers lose more than $18.4 million per week in earned wages.

The living wage in New York State is defined as $10 per hour with benefits, or $11.50 per hour without benefits. Within the retail sector, 44 percent of workers earn less than $10 an hour.

“If Shoe Mania were required to pay us a living wage, we would have enough to provide for ourselves and our families,” said former Shoe Mania worker John Montaño.

“We will fight [and] stand by the workers until we win,” Reyes said. “Solidarity is in our blood and on these blocks.”

Diane Krauthamer is a communications assistant at the Retail, Wholesale and Department Store Union.