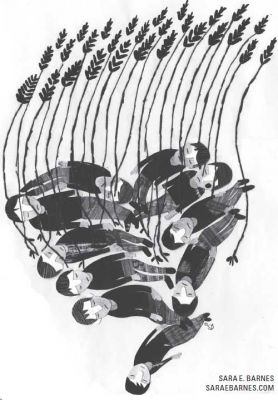 “Something is wrong with America’s moral imagination,” former U.S. poet laureate Robert Hass told the audience at the most recent Dodge poetry festival in New Jersey in fall 2008.

He was lamenting the loss of voices, particularly among writers in the United States, speaking out against social injustice. Certainly there is a tendency today in (North) American literary poetry circles (as opposed to spoken word) towards the apolitical. But in other parts of the world — where injustice is so blatant and pervasive — shying away from issues of oppression is a luxury poets do not seem to have. Mahmoud Darwish, considered by many the voice of the Palestinian people, is a prime example of this.

Like Pablo Neruda, Darwish not only wrote critically and bravely against his imperialist oppressors, but was also a dedicated activist, which the Israeli State punished him for with 20 years of exile. The impact of Darwish’s moral imagination and his ability to speak to and for a people was evidenced by the tens of thousands of people who attended his funeral in 2008.

Darwish’s friend John Berger, in his touching introduction to Mural, the latest translation of the poet’s work in English, provides a profound example of how beloved Darwish was. His grave in Ramallah (until recently fenced off by the Palestinian Authorities) was covered by mourners in sheaves of green wheat and red anemones, as the poet suggested in “Mural.”

Thanks to Berger, who co-translated Mural along with Remi Hammami, the English speaking world is given access for the first time to Darwish’s last poem, “The Dice Player,” as well as another version of “Mural” (first published in 2000).

The image of green wheat and anemones is one of the many in Darwish’s complex masterpiece, “Mural,” that bridges the space between life and death. In the poem, though Darwish is still alive, he also experiences the world beyond the grave. Throughout this journey the poet contrasts the present — life in Israeli-occupied Palestine — with the eschatological realm he is briefly visiting. The former he calls “a wasteland,” and “a festival of the vanquished” whereas the life beyond is green. “Green/the land of my poem is green,” Darwish writes, and “I am the grain that died and became green again/there is something of life in death.”

From a literary standpoint, Darwish is particularly interesting for his engagement with T.S. Eliot and the modern western poetics he, in part, pioneered. Many will recognize in “Mural” allusions to Eliot’s “The Wasteland.” Both poems in this book, like much of Eliot’s work, are written in a sprawling style, use multiple voices and rely on allusions to various spiritual traditions.

Darwish’s use of spiritual traditions is less academic and more mystical than Eliot’s — and his work certainly follows in the canonical tradition of the medieval mystical poetry of the Persian Sufi poets Rumi and Hafiz. However, Darwish’s poems, similar to Eliot’s, are also a pastiche of the modern and pre-modern.

But, unlike Eliot’s tight and precise verse, Darwish demonstrates an unbridled mysticism where the language seems to overflow. This technique has more than just aesthetic implications — Darwish is challenging Eliot through his writing style. In the face of Darwish’s horrifying material experience and its incalculable spiritual toll, Eliot’s precision and ‘objective’ lyric (Eliot believed the poet’s subjective experience had no place in a poem) are inauthentic expressions of reality.

After the masterpiece that is “Mural,” the second poem, “The Dice Player,” a meditation on chance and fate, perhaps cannot help but be anti-climatic. Throughout the poem Darwish repeatedly asks why he has been permitted to remain alive when so many Palestinians are killed everyday. But his answer to this existential predicament, “I’m nothing but the fall of the dice,” feels unsatisfying, if not a tad banal. More interesting is how the poem operates as a kind of manifesto on his later poetics (his earlier career being taken up with traditional Arabic forms). He declares that his “… vocabulary is mystic and my desires corporeal.” The result is poems like the ones in this book that overflow while being grounded in material reality. Darwish also tells us “I don’t think it was me who wrote the poem/except when inspiration stopped/ and inspiration is the luck of the skillful/ when they apply themselves.”

Darwish seems to see the role of the poet as neither being the master craftsman that Eliot envisioned or an empty conduit for the divine as a traditional mystic might, but, rather, as an equal collaborator with the eternal. While “The Dice Player,” lacks the depth of “Mural” it is certainly worth reading for understanding (at least a little) how one of the most important poets of this past century viewed his craft.

Both poems in Mural attempt to reconcile hope with despair, as well as the spiritual with the temporal. Darwish eschews dichotomies, even when it comes to how he views his oppressor. In “Mural” he states “a small grain of wheat will be enough for us, for me and my brother the enemy.” There is a yearning in this statement for peace, for justice without vengeance, and such a sentiment can only come from a deep love for humanity.

Darwish’s life and work act as an important reminder for poets working in insular academic communities and following in the exclusionary aesthetics of Eliot and other American modernists, that there are poets and places in the world where poetry is written not for other poets and critics, but for the people.

Jacob Scheier is the author of the poetry collection More to Keep us Warm (ECW Press), which was awarded the Governor General’s Literary Award for Poetry in 2008 by the Canada Council for the Arts.