It wasn’t quite Hiram Monserrate proposing a bill to get tough on domestic violence, but it came close.

State Senator Pedro Espada (D/R/D-Bronx) came to City Hall on Wednesday, Feb. 17, to announce his new proposal for a rent freeze. Espada’s bill, S.6811, would freeze rents for all rent-stabilized tenants who make less than $45,000 a year and pay more than one-third of their income in rent. 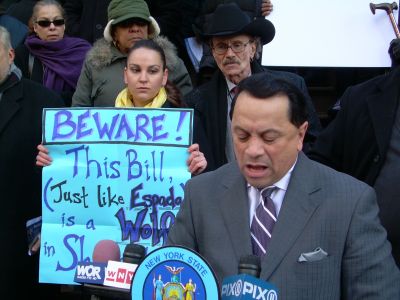 Sounds good, right? “This is a good thing for the tenants,” said Louella Hatch of the Tiebout Block and Tenant Association. “People my age—they are harassing us left and right.”

Hatch was one of about 40 Espada supporters bused down from the Bronx. They dutifully chanted “Rent Freeze Now” and applauded when reminded of their cues—but were almost outnumbered by the tenant advocates in the crowd, who held up “Evict Espada, Protect Tenant Rights” signs. The Espada critics called the measure “a landlord-driven bill dressed up in pro-tenant clothing.”

So which side is right? Speaking from the steps of City Hall, Espada declared that his bill would freeze rents for 300,000 households, and the cost “will come out of the pockets of landlords.”

He explained that the rent freeze would be financed by letting landlords buy their way out of the J-51 tax-break program. In October, the state Court of Appeals ruled that it was illegal for landlords who receive those subsidies—which are intended to aid the renovation of rent-regulated buildings—to deregulate rents in those buildings. Espada said legalizing this would prevent a nightmare of litigation.

In other words, the bill would subsidize the rents of one group of tenants by letting landlords buy the right to unlimited rent increases for others. It would allow the deregulation of between 30,000 and 100,000 apartments, from Stuyvesant Town in Manhattan to 1600 Sedgwick Ave., a privately owned Section 8 housing project in Espada’s district where the landlords are trying to evict tenants who won’t pay $500-a-month rent increases.

Asked about this at City Hall, Espada ducked the question, saying that the reporter hadn’t read his bill and that it would freeze rents for 300,000 households. He then ended the press conference.

Espada claims that the bill would cost the city only $100 million in the first year and $130 million after 10 years. “$100 million for the first year is plausible, but after that, their numbers are crazy,” says a veteran housing analyst who could not speak publicly. The only way those figures would work, he said, is if every tenant affected moved every year.

Espada’s people must have forgotten to consider that rent increases are cumulative, the analyst explained. Assuming a 3 percent annual rent increase, a $1,000 apartment would require a $30 subsidy the first year, but a little more than $60 the second year, more than $90 the third year, and so on.

If 10 percent of tenants affected moved every year, the analyst estimated, the bill would actually cost about $250 million after two years and $565 million after five years. Those subsidies would be paid by taxpayers to landlords.

Espada, elected in 2008 after he defeated indicted incumbent Efrain Gonzalez in the Democratic primary, has done more to paralyze the state Legislature than any other member. Immediately after he was elected, he and two other Democrats threatened to switch to the Republicans if they were not given committee chairmanships. Espada got the Housing Committee, but that wasn’t enough. In June, he switched to the Republicans, deadlocking the Senate for two months.

His move came the day before the Housing Committee was scheduled to vote on a bill to end vacancy decontrol of New York City apartments. He switched back to the Democrats when they agreed to give him the title of majority leader. But the Senate did not pass any of the tenant-protection bills that the Democrats had promised to enact when they gained a majority in 2008.

Though Espada represents a West Bronx district that runs from the Cross Bronx Expressway to Van Cortlandt Park, he most likely lives in Mamaroneck, an affluent Westchester County suburb. He has also come under scrutiny for not filing campaign-finance reports and allegedly channeling funds for health clinics he runs to his campaigns.