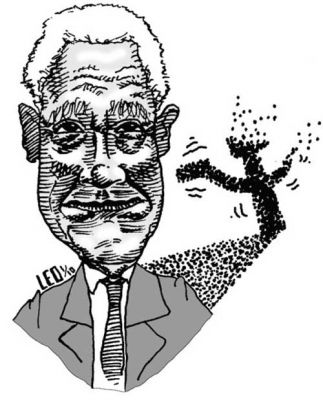 Martin Glaberman, a longtime associate of C.L.R. James, once observed that the staggering scope of James’ writing often meant, “Everyone produces his/her own James. People have, over the years, taken from him what they found useful, and imputed to him what they found necessary. James as cultural critic, James as master of the classics, James as expert on cricket, James as historian, James as major figure in the pan-African movement….”

A cursory glance at You Don’t Play with Revolution: The Montreal Lectures of C.L.R. James, mostly a collection of talks delivered to a group of West Indian students living in Montreal from 1966 to 1967, shows the breadth of James’ interests (the book is supplemented with interviews with James and letters from, to and about the scholar). Among the topics discussed are Marx’s Eighteenth Brumaire as it relates to the Caribbean; the Haitian Revolution, Shakespeare’s King Lear, the making of the Caribbean people, and Lenin’s views on labor unions.

James, a Marxist journalist, essayist and social theorist, is perhaps best known for his 1938 masterwork on the Haitian Revolution, The Black Jacobins. He made it his life’s work to examine the movement of historical forces from below and the response of those in power to these efforts. Lectures “The Making of the Caribbean People” and “The Haitian Revolution and the Making of the Modern World,” both included in You Don’t Play with Revolution, revisit this theme, which, given the current tragedy in Haiti, is as important as ever. James ties together the ways slaves organized themselves in order to run the West Indian plantations, the amazing defeat of the British army at the hands of the Haitians in 1791, the Haitian revolution and its importance to the French Revolution. He extends the analysis to emphasize the role of the creative resistance of American slaves in inspiring the abolitionist movement.

A close study of Black Americans had helped James, who was born in 1901 in Trinidad and Tobago, then a British colony, arrive at some of his most important theoretical breakthroughs, particularly his rejection of the Leninist concept of the vanguard party. In 1938, at the behest of Leon Trotsky and his U.S. lieutenant James P. Cannon, James came to the United States from London largely to help the Socialist Workers Party determine its stance on the “Negro Question.” He came to the conclusion that American Blacks didn’t need to have a Leninist organization imposed on them and soon rejected the entire notion of the revolutionary vanguard.

James grapples with Lenin’s writings on labor as well. The book dedicates three chapters to James’ views on “Lenin and the Trade Union Debate in Russia,” which lays out a close reading of Lenin’s public statements on the need for workers’ autonomy. This view directly contradicted that of Trotsky, who argued for more bureaucracy and increased state control over workers’ organizations (and later for the militarization of the working class). It’s impossible to accept Lenin’s proclamations at face value — in practice, Lenin and the Bolsheviks beefed up the power of the Bolshevik party at the expense of the Soviets (workers’ councils) and other workers’ organizations. David Austin, the book’s editor, could have provided a note to clarify James’ apparent Lenin paradox — even though James rejected Lenin’s idea of the vanguard party, he believed that Lenin only used that organizational form out of necessity. Kent Worcester explains in his excellent C.L.R. James: A Political Biography, “A pronounced sympathy for Lenin’s own method and practice did not, it seems, preclude a break with a core proposition of Marxist-Leninist politics.”

Many of those James worked with or directly influenced attained some degree, however compromised, of state power — Kwame Nkrumah, Eric Williams and Jomo Kenyatta, the first prime ministers of Ghana, Trinidad and Kenya, respectively, maintained close contact with James throughout their political careers. None of these figures is dealt with uncritically here. Throughout the volume, James’ jabs at Williams, like his digs against Trotsky, Bertrand Russell, Jean-Paul Sartre and Isaac Deutscher, never come across as petty resentment. Through debating and arguing against these characters, he earned his stripes (and his snipes).

The spectrum of these lectures can be a bit daunting, but the book’s breadth makes the collection useful to both novices looking for a starting point and initiates alike. Still, the inclusion of a much-needed index at the expense of some of the correspondence between some of James’ obscure acolytes would have made the book easier to digest.