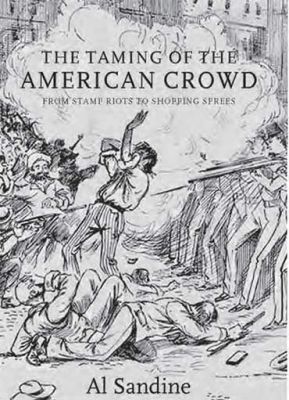 The Taming of the American Crowd: From Stamp Riots to Shopping Sprees
By Al Sandine
Monthly Review Press, 2009

In the fall of 2002, I was part of a crowd in Washington, D.C., that consisted of around 1,000 demonstrators protesting U.S. policy in Colombia. Outside a Senate office building, the march splintered and shrank to a few hundred people, corralled into a park by nearly as many riot cops. I watched an officer shove protesters at the edge of the cordon, apparently trying to provoke them with the feeble claim that they had been standing in a flowerbed. The morning ended with dozens of arrests.

Those lackluster, divided marches prior to the Iraq War raise an important question about politics: what would it take for an American crowd to act with a decisive, collective purpose other than consumption? In The Taming of the American Crowd: From Stamp Riots to Shopping Sprees, Al Sandine investigates political culture in an attempt to understand why Americans are more likely to gather for acts of consumption than for any other act of ostensible or real selfinterest.

Sandine builds on the work of sociologists like Eric Hobsbawm and Guy Rude, whose study of the crowds of the French Revolution may be the best-known work in the field of crowd studies — a field that is now largely the domain of marketers and economists. Like Hobsbawm and Rude, he wants to explain the makeup and motives of crowds, particularly emphasizing the distinction between a “crowd” and a “mob.” The two are not synonymous; a crowd has “the capacity for physical turmoil, whether or not it gets played out in action. A crowd is potentially turbulent. … There is power in this turbulence,” he writes.

According to Sandine, the political potential of turbulence has largely been lost on modern American crowds, which are better described as disempowered mobs. Little resembling those of America’s past, crowds today represent obstacles to their members — the other drivers in traffic on the freeway, the moviegoers queuing up, shoppers fighting over the last sale item in a department store. Crowds have largely become self-selected, but not self-directed. Like many protests since 9/11, the route of the march in Washington was partially directed by plainclothes police officers operating inside the march.

While Hobswam saw Europe’s preindustrial food rioters as precursors to the crowds that would overthrow industrialized governments, Sandine identifies a sinister mutation in the makeup of American gatherings: the state management of potentially “dangerous,” motivated crowds and the thorough supervision of “safe” flocks of spectators and consumers — a powerful detriment to democracy. In the short term, Sandine predicts that the event most likely to yield a self-directed crowd will be the next major American disaster. He cites the crowd after Hurricane Katrina, where residents trapped in the city were forced to rely on one another. We might also think of the days following Sept. 11, when collective action took place across lines of class; in New Orleans, Katrina’s greatest victims were primarily those without the means to leave before the storm or hire private security. But such nonconsumer crowds are rare, and it’s discouraging that disasters appear to be one of the few catalysts to community building.

Writing on the subject of American crowd control in Harper’s in 2004, Lewis Lapham posited that Americans rise approximately once every three decades, citing the Progressive Era, the Great Depression, and the Civil Rights and anti-war movements of the 1960s. Taking an account of the rollback of civil rights with the “war on terror” and the advent of the USA Patriot Act, Lapham mused, “Perhaps the Pentagon thinks we’re overdue.” The Pentagon’s paternalism squares with Sandine’s diagnosis of American political culture: rigorous state supervision of collective action indicates the threat that motivated crowds represent to state power. Authorities control public space with preemptive shows of force, designations of “free speech zones,” “non-lethal” weaponry and bureaucratic obstacles.

Indeed, it’s hard to imagine American authorities meeting a crowd’s demands with concessions. Given that the U.S. occupation of the Philippines provided the model for America’s urban police forces, it’s not surprising that drone surveillance, biometrics and non-lethal crowd control techniques have already migrated back from the battlefield to the home front.

But how will we respond? Sandine’s research brings to mind George W. Bush’s call in the aftermath of 9/11 for people to “get down to DisneyWorld.” American crowds are deployed as passive herds of consumers. Appraising the developments of the digital age, Sandine sees the crowd as a medium for communication and reminds us that “people have to meet one-onone. … The disembodied realm of cyberspace is the very antithesis of a culture of crowds.”

Meanwhile, crowds in Iran, Greece and around the world are threatening existing power structures. Most Americans, if they are aware of such events at all, participate remotely and passively in the crowd they know best: a television audience.