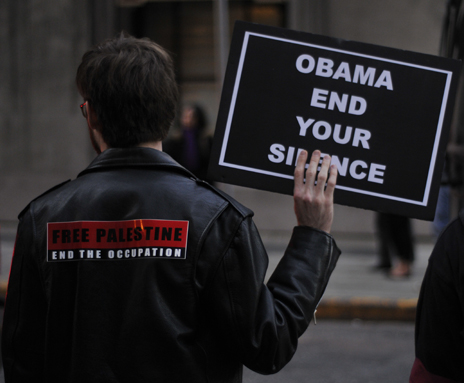 The moving, silent protest March 9 outside the Waldorf Astoria in Manhattan as Lt. General Gabi Ashkenazi gave the keynote speech at the Friends of the Israel Defense Forces gala was powerful and inspiring.

I asked Dorothy Zellner, a founding member of Jews Say No!, whether the hundreds of people who showed up to march and the two dozen or so organizations who co-sponsored the action was indicative of a larger shift in public opinion regarding Israel.

“Something about Gaza, so horrible, so horrific, has pushed a lot of people who were sitting on the fence over,” the long-time civil rights activist replied. But, she said, “Last year, even though it was after Gaza, it hadn’t penetrated. And mostly it hadn’t penetrated because Amnesty International and Human Rights Watch, those weren’t in the news. But the Goldstone report,” changed things.

But Americans who solely read and watch corporate, mainstream media don’t know—about Goldstone, about the crimes of Israel, about why it is that there is a fundraiser on behalf of a foreign army in New York City, or that hundreds of people, including many Jews, were outraged enough to demonstrate against it. We have here—exemplified in last night’s demonstration—the makings of a global, diverse, and loud movement against Israeli apartheid and the occupation, and of a growing rift between Jews and the mainstream Jewish establishment on the question of Israel. Yet, there’s not a peep from the mainstream media.

The local papers in New York didn’t touch it. The Daily News, which is owned by ultra Zionist Mort Zuckerman, or the Post, owned by Rupert Murdoch, didn’t feel the need to send a reporter to the Waldorf. The New York Times didn’t either. Nor did any other corporate publication, or MSNBC’s Rachel Maddow or Keith Olbermann. The list goes on and on. Instead, we’re stuck with Chris Matthews smiling with Joe Biden and Ethan Bronner in Israel, engaging in vapid conversation about a dead-end “peace process.”

Many outlets in Israel covered it, for god’s sake, another indication (as many others have said) of how constrained the American mainstream media conversation about Israel is.

It’s what I expect. Corporate media’s profit-model has no interest in social justice, nor do the advertisers behind their profit, nor do powerful media moguls who cozy up to those in power and who share their interests. And, particularly on this issue, we have the Israel lobby, and big journalists who march in lockstep with Israel.

Thankfully, we also have the Internet, where progressive, independent voices are being heard. Democracy Now!, Grit TV, and Mondoweiss covered the protest in-depth, as did this site. Through the web, the Palestine solidarity movement, and the independent media who cover it, are circumventing mainstream media.

A version of this article originally appeared in Mondoweiss.