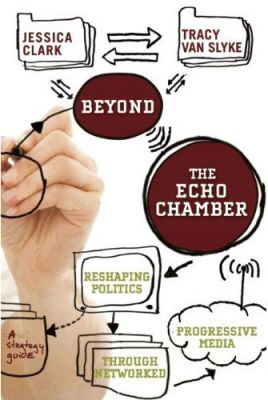 Beyond the Echo Chamber: Reshaping Politics Through Progressive Media
By Jessica Clark and Tracy Van Slyke
The New Press, 2010

It’s mind-boggling that a decade ago the progressive blogosphere barely existed. The Daily Kos is just eight years old, FireDogLake and Feministing six. Similarly stunning, such staples as The Huffington Post, Talking Points Memo, and Color of Change came into our lives a mere five years ago.

Indeed, the internet seems to be continually exploding, giving thousands of progressive bloggers, videographers and photographers an outlet. Throughout the country — and in much of the world — an array of personalities regularly share their insights and complaints. It’s made this a heady time for journalism, moving it from a profession requiring formal credentials to one in which those with access to a keyboard or digital camera can present ideas and spar with friends, acquaintances and strangers.

This development has already had a discernible impact on the body politic and Jessica Clark and Tracy Van Slyke’s Beyond the Echo Chamber enthusiastically trumpets the rise in “citizen journalism.” The book further celebrates the information sharing that has resulted from the internet’s nearly ubiquitous presence.

Take the case of the Jena Six, a group of African-American high school students arrested in the fall of 2006 for attempted murder and conspiracy, charges that might have led to decades in prison. According to Clark and Van Slyke, in May 2007 Left Turn magazine ran an article about the Louisiana case, highlighting the overt racism the men had experienced from white classmates. A Baptist preacher-cum-community activist, Alan Bean, saw the article, investigated, and sent a packet of materials to a Black Chicago Tribune reporter. The reporter blogged about the arrests and then emailed his work to a handful of others. The story quickly went viral and in short order a campaign to reduce the charges against the young men was underway. “While the Black blogosphere coalesced, the bloggers united around not only the unjust sentencing of the Jena Six, but also what they criticized as a lack of consistent attention by the ‘white’ media to the unfolding events in Jena,” Clark and Van Slyke report. “When the mainstream media did finally pay attention, specifically in the leadup to the Sept. 20 march, you could find AP [Associated Press] and major newspapers in Jena.” The six were ultimately convicted of battery, a clear victory for both the arrested teens and the organizers. By using the internet to publicize conditions in this rural backwater, they successfully mobilized nationwide outrage against blatant racial discrimination in the small southern town.

Yet for all this, Clark and Van Slyke note that most white bloggers paid little to no attention to the case, raising the question of whether the internet replicates the racial, class and gender stratification of society itself. While the jury remains out on this, Clark and Van Slyke are optimistic that democracy, cooperation and equity will ultimately be enhanced by the vast array of information available online.

I’m not so sure. In fact, I fear that somewhere down the line, once the novelty of unpaid blogging wears off, those writers and organizations that are best able to attract advertising dollars — the most polished journalists, best filmmakers and most articulate debaters — will knock those with smaller followings and lesser skills off the playing field.

What’s more, I share the authors’ concern about journalistic integrity and wonder how best to hold websites and blogs accountable for the factual information they present. It comes down to making sure that good, old-fashioned investigative reporting is done with the same rigor online, as it is when writing is submitted to print publications. Good reporting is already evident on sites including FireDogLake, AlterNet, Truthout, rhrealitycheck, The Huffington Post and FiveThirtyEight. com, but since it is possible for pretty much anyone to create a webpage, many postings leave a lot to be desired. To be clear, I’m not advocating the illusion of unbiased reporting or the denial of perspective — reporting can and should highlight racial, class, and gender bias and showcase bad foreign and domestic policy — but at the same time, it needs to eschew rhetoric and deliver well-supported data to buttress claims and allegations.

My concern is this: hard-hitting gumshoe reporting takes a good deal of money, money to support research and train and pay reporters, photographers, and videographers. Sadly, if this cash comes from the same advertisers that now dominate mainstream media, there’s no reason to think that blogs or websites will be any better at offering progressive alternatives than their predecessors.

So, can the Internet be a boon to democracy and progressive movements? Absolutely. But let’s not forget that this is neither a given nor a guarantee. While we’re at it, let’s not forget that the Right also has computers and, as the Tea Party movement has made clear, conservative media hounds and activists are adept at using them.

Knowing how to use the media is essential for achieving social change. Ultimately, however, a tool is just a tool. From my perch, campaigns for justice always require capital, both human and green, to catch fire. And while broadsheets, blogs, vlogs and websites are essential components of such efforts, nothing can replace the human-tohuman connection of grassroots organizing to compel civic engagement. At the end of the day, technology can enhance, but not replace, on-the-ground outreach.

Clark and Van Slyke believe that networked media can reshape progressive politics. I hope they’re right. Some positive indicators are evident: First, an online campaign forced the David and Goliath Company to stop advertising a teeshirt with the slogan, “No Means No Unless I’m Drunk;” Secondly, Feministing pushed Time magazine to print a retraction after describing Plan B emergency contraception as “abortion inducing.”

Still, despite exciting possibilities for online activism, the United States is currently experiencing a virulent right-wing escalation and it is obvious that media can push politics from both left and right. Beyond the Echo Chamber presents an exhilarating vision for progressive ascent. I’d like to think that this isn’t a pipe dream.