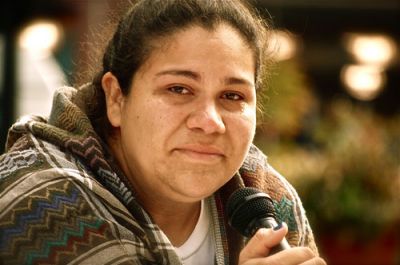 The students — Felipe Matos, Gaby Pacheco, Carlos Roa and Juan Rodriguez — are walking 1,500 miles from Miami to Washington, D.C., in a five-month campaign named “Trail of Dreams” to raise attention about the conditions of immigrants and to pressure President Barack Obama and Congress to take up comprehensive immigration reform, including providing greater access for undocumented students to education.

“We’re coming out of the shadows,” Pacheco, 25, told The Indypendent in January. “Here we are, the undocumented youth that have so much potential and so much desire to make this a better country.” The students had tried to schedule a meeting with the sheriff ahead of time, but had not been successful, so they dropped in. If the students had been arrested, three of them could have faced deportation. Rodriguez is the only legal resident.

Conway has been a vocal proponent of “287(g),” a federal provision authorizing local law enforcement to enforce federal immigration laws. The Trail of Dreams says that this policy has resulted in the deportation of hundreds of immigrants from Gwinnett County in just the past three months — which the student walkers say is oppressive and discriminatory.

“We’re not scared of Sheriff Conway,” said Rodriquez, 20, in a March 2 press statement. “Local enforcement of federal policies like the one Sheriff Conway is proudly implementing is proof of the need for real immigration reform. These policies have the long-term effect of criminalizing immigrants — the vast majority of whom are here only to work hard and provide for their families.”

For more information about the Trail of Dreams, visit trail2010.org.