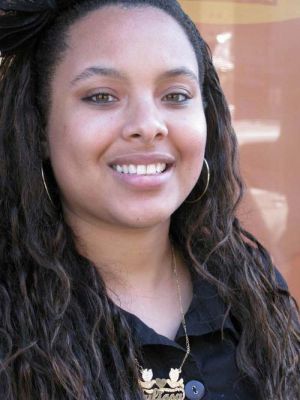 Tucked under a discreet awning along Roosevelt Avenue in Elmhurst, Queens, Make the Road New York is nestled in a seemingly endless mall of discount groceries and gas marts. The outside of the immigrant rights group’s office is painted with a mural of the New York skyline.

Inside, the walls are draped with national flags — yellow, red, white and blue. Classrooms buzz with workshops on organizing, language, job-training and computer skills. Make the Road New York advocates for immigrants in housing, education and labor disputes, winning numerous legal and political battles over the last decade. The Indypendent’s Jon Gerberg sat down with Julissa Bisono, the workplace justice organizer, to discuss her organization’s work and the current political reality for immigrants living in the United States.

Jon Gerberg: What is a normal day like here at Make the Road New York?

Julissa Bisono: What I do here is try to organize mostly immigrant workers in order to improve working conditions and help them recover wages. On a typical day, a person comes in who has either been working for a place for many, many years and been laid off, realized that they have not been receiving minimum wage, or has not been paid overtime. What I’ve been seeing lately is that people are working for a month or two, being promised wages, and then never getting anything at all.

JG: What are some examples that really infuriated you?

JB: Usually the people that come in have very extreme cases. I had a worker come in yesterday who said he left his job to work for a construction company. He worked there for two months, was promised $150 a day, and then didn’t get a penny. Now he’s getting evicted because he hasn’t been able to pay the rent.

JG: Over the past two years, how has the recession been a factor in the increase in workplace injustice?

JB: Undocumented workers don’t have the benefit of applying for unemployment insurance, so they don’t have many options. They need to find another job as soon as possible. So what I’ve seen is that they go to these employment agencies to help them find a job, and these employment agencies have become smarter about ripping off people. In the last two years I’ve had a couple of our members move back to their countries. After being here for 10 years, not seeing your family, it starts to take a toll on you. Some people are hopeless about immigration reform and just trying to survive day to day.

JG: With such high unemployment, why do you think people are still immigrating?

JB: There’s something about New York City. Back in our countries, people still talk about that “American Dream”: “I’m gonna work really hard here and I’m gonna build up and then go back to my country.” I feel like maybe 30 years ago it was more possible to actually do that, but now it’s more challenging. Jobs are not there. Wages are not there. It’s really hard to live in New York City because it’s expensive.

JG: You say there’s not as much racism in New York, but reports have shown that unemployment is an issue that has vastly different effects across lines of race and class.

JB: I feel like it’s easier to adapt here. It’s different from living in a town in the suburbs where you’re the only Hispanic family. Queens is the most diverse place in the world. In Queens, you see the diversity along the 7 train. You go to Main Street and it’s Asian. Corona is Mexican, Ecuadorian and Dominicans. And then Jackson Heights is Colombian, Bangladeshi. It’s easier when there are different types of communities.

JG: Sometimes there are conflicts of interest between labor and immigrants’ rights groups. What differences have you seen in your work and how do you think they can be reconciled?

Some unions are stuck on the fact that they want work visas, which creates a space where people are more vulnerable to exploitation. What we want as an organization is immigration reform that is going to allow families to stay together and still work and follow a path to citizenship.

JG: How do you propose to solve some of these problems?

JB: Well there’s this constant fear of immigration [police]. We need immigration reform as soon as possible. There are a lot of workers that pay their taxes here but never enjoy the benefits of a person that has [legal] status.

JG: What can New Yorkers do right now to start changing these injustices?

JB: They need to get organized. They need to get together as a group and start fighting for justice. I know it’s hard because people, especially undocumented workers, fear immigration [police]. I think that people need to start believing that if we get together there can actually be change. I don’t want to sound like Obama, but I’ve seen when workers organize themselves, the power that they have.