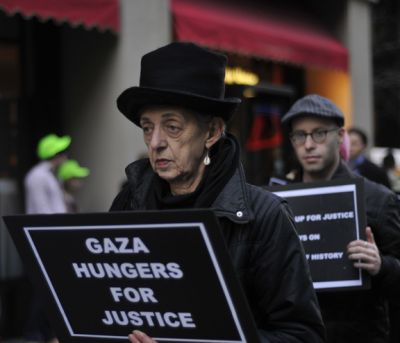 While the Friends of the Israel Defense Forces (IDF) were holding a $1,000 a plate fundraiser at the ritzy Waldorf Astoria hotel in Manhattan, hundreds of Palestine solidarity activists from a wide array of organizations took to the streets to protest Israeli war crimes, the blockade of Gaza, and the occupation of Palestine.

Dressed in black and carrying signs that read “Gaza Hungers for Justice,” and “Israeli War Criminals Feast at the Waldorf,” protesters circled the Waldorf Astoria in a somber, moving procession only punctuated by the sounds of drums and gongs.  The demonstrators also held up signs highlighting the findings of the Goldstone report, which stated that Israeli forces bombed the Gaza Zoo, used white phosphorus against civilians in Gaza during “Operation Cast Lead,” and killed innocent Palestinians.

The United Nations’ Goldstone report concluded that both Israel and Palestinian militants committed war crimes, though the majority of the report focused on Israel, which killed nearly 1,400 Palestinians, including over 300 children, in the 2008-2009 assault on Gaza.

The Goldstone report stated that the war on Gaza “was a deliberately disproportionate attack designed to punish, humiliate and terrorize a civilian population.”  Other human rights groups, including Human Rights Watch and Amnesty International, have accused Israel of committing war crimes as well.

The silent protest was called for by Jews Say No!, a Jewish anti-occupation group formed while the attack on Gaza was happening.  The action was co-sponsored by over 20 activist groups, including Adalah-NY, American Jews for a Just Peace, Jewish Voice for Peace, and the National Lawyers Guild NY Chapter, and was endorsed by two Palestinian groups from the village of Bil’in and four Israeli groups.

“Our idea is to show the totally atrocious contradiction of having a $1,000 a plate dinner for people who a year ago killed 1,400 people, mostly civilians,” said Dorothy Zellner, a founding member of Jews Say No!  “People who commit these kind of war crimes should not be celebrated and should not be welcome here in our city.” 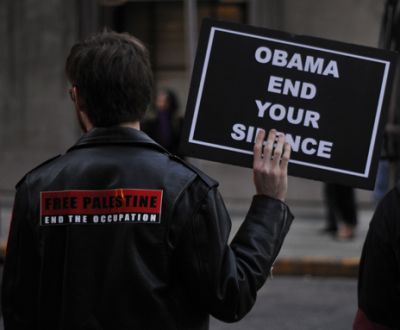 Inside the Waldorf, the keynote speaker at the dinner, which was put together by the Friends of the IDF, a group that provides support and services to the Israeli army, was Lt. Gen. Gabi Ashkenazi.  Ashkenazi, as the IDF Chief of General Staff, was responsible for the onslaught on Gaza, which, in addition to many civilian deaths, saw widespread destruction of civilian infrastructure.

Many lamented the fact that while Ashkenazi may be fearful of being arrested in European countries that adhere to the principle of universal jurisdiction, he is worry free about the United States.

“A terrorist, a war criminal, should not be dining in the streets of New York.  He belongs in jail,” said Dima Abisaab, a Lebanese-American activist with Al-Awda New York:  The Palestine Right to Return Coalition, which organized a separate rally across the street from the Waldorf.  At the Al-Awda-organized protest, the crowd chanted “Free, Free Palestine” and “Not Another Nickel, Not Another Dime, No More Money for Israel’s Crimes” and waved Palestinian flags.

Counter-demonstrators who strongly supported Israel were present, though their numbers were much smaller than those of the Palestine solidarity demonstrators.

The lavish dinner with Ashkenazi comes two days after activists marked the 1,000th day of the blockade of Gaza, which was imposed after the Islamist movement Hamas won democratic elections in 2006. 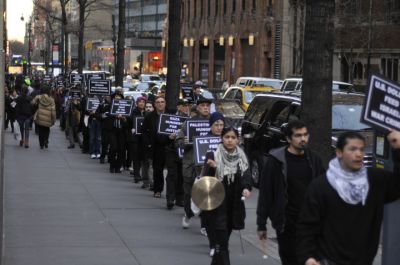 “The assault on Gaza is ongoing.  It happened in the attack that was the largest manifestation of the Israeli brutality, but the siege is ongoing,” said Riham Barghouti, a founding member of Adalah-NY and a Palestinian-American.  “We need a long-term kind of response to what Israel is doing in the form of boycott, divestment and sanctions, to really start holding Israel accountable and end this impunity it seems to have on the international level.”

Amer Shurrab, a Palestinian from the Gazan city of Khan Younis and a graduate of Middlebury College, participated in the silent protest.