After the Jan. 12 earthquake that devastated Haiti, Dr. Melissa Barber received a call asking her to help treat people left injured and living in squalid conditions.

“There was no question,” said Barber, 30, who was born and raised in the Bronx and worked in quality assessment at St. Barnabas Hospital in the heart of the borough. “I actually resigned and I made plans to go to Haiti for a month. That is how much it’s ingrained in me to help the underserved communities when they are in need.”

Barber’s sense of service stems from her training at the Latin American School of Medicine in Havana, Cuba (See sidebar). Like thousands of fellow graduates from poor and indigenous communities in Latin America, the Caribbean and Africa, she received a full scholarship to attend the school in exchange for a commitment to work in areas that lack adequate access to healthcare. Haiti no doubt fit that definition before the earthquake, and even more so afterward. So Barber joined six other Cuban-trained doctors from the United States — all of them women — who packed their bags full of donated medical supplies and arrived Jan. 26 in the Dominican Republic, beginning a commitment that could last for years.

ON THE GROUND IN HAITI

On the bus ride into Haiti, the physicians from New York City, Houston and Oakland got a crash course in Creole from their Haitian-American colleague, Dr. Martine Pierre. She taught them useful phrases like, “What’s your name?” and “What’s wrong with you?”

For the next month the doctors would use these phrases while treating hundreds of patients a day. Their home base was a clinic in Croix des Bouquets, a suburb of Port-au-Prince that lies eight miles northeast of the ruined capital. Cuban doctors working in Haiti before the quake set up the makeshift hospital a week before they arrived, and already word had spread to longtime residents and newly arrived refugees living nearby in tent villages.

“The line to see us would start at four in the morning,” Barber said. “Once they realized there is free medical care and medicine, they were like ‘Oh my god, I can finally see a doctor.’”

Many of the patients treated at the clinic had never seen a doctor before. In addition to receiving treatment for quake-related injuries and water-borne diseases, they sought help for chronic conditions like diabetes and high blood pressure. The doctors relied on their Cuban-training that focused on primary care medicine, as well as two years of training in disaster relief.

But nothing could prepare Barber for experiences like treating a 4-year-old boy who was brought in by his mother in a state of severe dehydration. Within 10 minutes of his arrival he died. The mother said she had left her son to search for his father when he went missing after the earthquake. By the time she returned home he had been suffering from diarrhea for four days.

“That kind of stuff is so preventable,” Barber said. “It speaks of a lack of healthcare that they need.”

Barber and her fellow physicians from the United States inspired the Comandante himself, Fidel Castro, to send an invitation to all of the school’s graduates to volunteer in Haiti. By February, more than 250 alumni from 25 countries responded.

They came from Bolivia, Mali, Lebanon and Nigeria — among other nations. About 300 Haitians in their final two years of medical school returned home as well.

For the first time ever, an international contingent of Cuban-trained doctors joined the 230 Cuban members of the Henry Reeve Emergency Medical Brigade, which specializes in disaster response. Many of them had provided medical support after recent earthquakes in Pakistan and China. All of these volunteers bolstered the contingent of about 350 Cuban doctors who were in Haiti before the earthquake.

Cuba initiated a medical cooperation agreement in 1998 to meet the primary care needs of the impoverished nation. 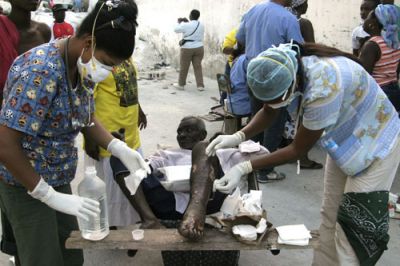 “We were working closely with the Cuban mission that was already in Port-au-Prince,” recalled Dr. Elsie Watler, another member of the U.S. medical delegation from New York. “We were able to cooperate with them since they were there from the beginning.”

According to reports from the Cuban news service, Prensa Latina, there are now more than 1,000 Cuban and Cuban-trained medical workers in Haiti. But their presence has received scant coverage in the U.S. mainstream press. While Doctors Without Borders (Médecins Sans Frontères) sent around 300 heath professionals and appeared in countless media reports with groups like the Red Cross, mentions of the Cuban teams were limited to Cuban and Venezuelan outlets.

Bruce Calder, a professor emeritus of Latin American history at University of Illinois at Chicago, watched the mainstream coverage and noted that volunteers from almost every country but Cuba were getting recognized: “I even heard New Zealanders interviewed today!”

Medical personnel from many international NGOs began to pull out of Haiti once immediate rescue and emergency needs were met. But the Cuban-trained doctors kept working more than a month after the disaster. They split up into teams of 50 and fanned out to work at field hospitals and open-air clinics set up in Port-au-Prince, Leogane, Grande Goave and Arcahaie, often visiting previously ignored tent villages full of thousands of people.

“You would see people living not in tents, but structures made out of tree branches and sheets,” Barber said. “That’s where the levels of rodents, mosquitoes, flies and just horrible living conditions was most prominent.”

At these sprawling camps the doctors carried out a massive vaccination campaign against highly contagious diseases like typhoid fever, whooping cough and diphtheria.

By mid-February, doctors treated 14,197 patients in Croix des Bouquets, along with 5,920 patients at annex sites. Their colleagues throughout the other sites treated an additional 50,000 people. They performed more than 5,000 surgeries and attended at least 300 births, according to the Cuban government.

“The responsibility that was placed on our shoulders was tremendous,” said Dr. Melissa Mitchell, a member of the Cuban-trained U.S. delegation. “Some of us were delivering babies alone for the first time ever. The first time that happened it was a very emotional experience, but then it became normal.”

In addition to dealing with primary care and treating disease, the Cubans expanded their focus to address the need for physical and psychological rehabilitation. Physical therapy programs have been set up at several clinics to assist those with injuries or amputations. Specialists are also available to treat post-traumatic stress disorder among survivors. 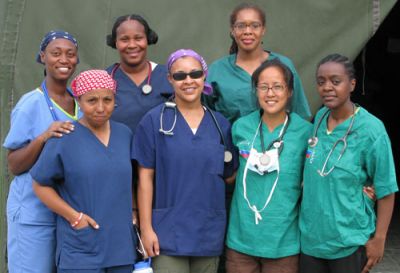 At the field hospital in Croix des Bouquets, which occupies what had formerly been a playground, physicians worked to reduce psychological damage suffered by children. With help from parents in the community they put together a children’s festival that included watercolor painting, singing and sports. Now, the children’s gathering has become a weekly event.

“Every Thursday they would gather all the kids in the community together to do activities,” Barber said. Volunteers translated several children’s books from Spanish into Creole, and sent the translations to Cuba, which sent back copies to use for storytelling. Prensa Latina reports plans are underway to introduce the children’s festivals in other devastated areas, “permitting children to put their nightmares off to one side, at least for a while.”

Dr. Cristóbal Martínez told Prensa Latina that, “Although there had been a terrible disaster, if children eat, play and can enjoy themselves, in their consciousness the disaster has already passed.”

The doctors who took a break from their work to paint and play games with the children said they also benefited from the mental break.

“It was difficult for us to leave because our presence is still needed,” said Mitchell, who joined the seven-member U.S. delegation after they returned in early March during a press conference at the New York City headquarters of Transit Workers Union Local 100. “It’s not about just being there for the crisis. We need to be there for the long term,” she said. “We need to be able to help establish some type of medical system.”

In fact, the makeshift clinics where the doctors worked are essentially pilot projects for long-term heathcare centers. They will expand upon the hospitals Cuba established prior to the earthquake. Several hundred recent graduates from the Latin American School of Public Health are staffing the hospitals until Haitian students finish their training and replace them. Many of the graduates committed to stay in Haiti for a year or more. In return, they will receive two more years of free medical training in the specialized field of their choice.

Cuban Vice President Esteban Lazo Hernández said his country’s commitment to Haiti “has to be at that level, above all in something as significant as the population’s health.”

Many of the women in the U.S. delegation expressed a desire to return to Haiti when their schedules permit.

Dr. Martine Pierre spoke with one of the doctors back at the clinic in Croix des Bouquets the day after the delegation left. He said the patients they had treated for chronic diseases came looking for the U.S. doctors and were sad to find they were gone. “That really hurt their feelings,” Pierre said. “But the Haitian doctors told them we will soon be back.”

For now, Barber is back in the Bronx focusing on studying for exams that she hopes will get her into a residency program for Obstetrics and Gynecology. But her mind is still on Haiti. “The treatment needs to be continuous,” Barber said. “Because we’ve only put a dent in what is needed for the population.”

For many in the United States, Cuba conjures up images of cigars and its bearded leader Fidel Castro. But for poor people in dozens of countries around the world, Cuba has become a lifeline.

Some 30,000 Cuban doctors currently serve in 70 countries as a part of the island nation’s program of South-to-South assistance. Emphasizing primary and preventative care, these doctors operate in urban shantytowns and remote rural areas that private medical practitioners are unable or unwilling to reach.

Cuba is also training a new generation of “people’s doctors:” more than 24,000 foreign medical students are studying for free in Havana at the Latin American School of Medicine (or ELAM, Escuela Latinoamericana de Medicina).

Most students are from Latin America, the Caribbean and Africa but more than 100 are from the United States. Preference is given to students from modest backgrounds who otherwise would not have been able to attend medical school. 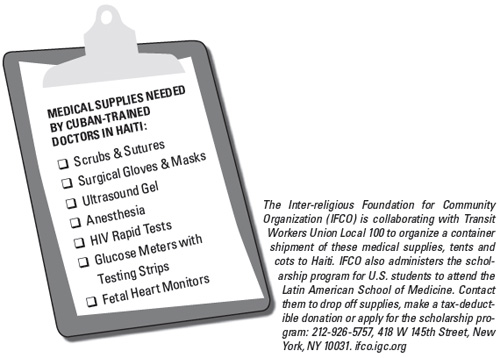