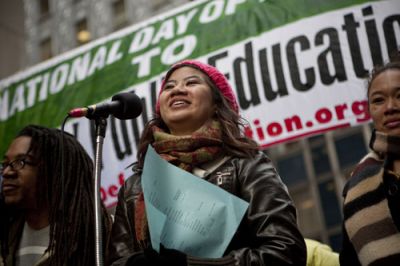 Both events were held on a day when hundreds of thousands of people took part in demonstrations in more than 30 states across the United States to protest deep cuts in funding for public education. In the movement’s epicenter in California, actions included rallies, marches and occupations of buildings and freeways. Mass rallies were held in San Francisco and Sacramento. Students blocked the main gate to the University of California at Berkeley. In Oakland, more than 140 people were arrested and one student was seriously injured after police attacked protesters who stopped traffic on Interstate 880. California college students were recently hit with tuition hikes of 32 percent while more than 20,000 public school teachers face possible layoffs.