IRAQI ELECTION SHIFTS POWER
Millions of Iraqis cast ballots on March 7 in the second full parliamentary election since the U.S.-led invasion, and ahead of the planned withdrawal of most U.S. military forces later this year. The secular Iraqiya coalition, led by former U.S.-installed prime minister Iyad Allawi, won the most seats, beating the incumbent Nouri al-Maliki’s State of Law party. The largest bloc of elected members will choose the prime minister, so now the two parties are trying to unite with the Kurds, or with the Iraqi National Alliance, a coalition of mostly religious Shia groups that had a strong showing in the election and is dominated by the anti-American cleric Muqtada al-Sadr. 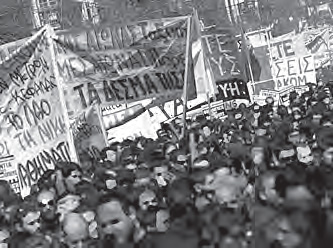 GREEKS RESIST WIDESPREAD CUTS
Nationwide strikes and protests shut down Greece in March after the debt-ridden government imposed harsh austerity measures. The cuts total more than $20 billion, and slash civil servants’ wages, freeze their pensions and raise taxes. At one point, workers occupied the printing presses to stop the publication of the austerity measures. Public transportation came to a halt during two 24-hour general strikes, and an estimated 100,000 people demonstrated in Athens. Unions say workers and average Greek citizens are being forced to pay for the government’s fiscal mismanagement, and they’ve vowed ongoing resistance to the cutbacks.

SORRY, CHARLIE
Trade trumped concern for threatened marine species at a recent meeting in Doha, Qatar, of the Convention on Trade in Endangered Species of Wild Fauna and Flora (CITES). The Inter Press Service News Agency reports the convention failed to pass a measure to protect the Atlantic bluefin tuna and eight species of shark. Much of the blame was put on Japan, where a single bluefin tuna can fetch $100,000, and China, where shark fin soup is a highly prized delicacy. “Some countries may not want to have commercially traded fish species listed on CITES because they are huge importers of fish,” said Karen Sack, deputy director of international marine campaigns at Pew Environmental Group. “But … they are going to quickly need to change the way they act or our plates and our oceans will all be empty.”

ASSASSINATED HUMAN RIGHTS LEADER REMEMBERED
El Salvador’s government has held its first public commemoration of the assassination of Archbiship Óscar Romero on the 30th anniversary of his death. An outspoken advocate for the poor, Romero was shot on March 24, 1980, while he celebrated mass, shortly after he gave a sermon calling on soldiers to stop violating human rights. The assassins were part of a U.S.-backed rightwing death squad. Salvadorean President Mauricio Funes offered an official state apology for the murder, saying the killers “unfortunately acted with the protection, collaboration or participation of state agents.” Thousands marched by the chapel where Romero was killed, chanting one of his famous comments: “They can kill me, but they will never kill justice.”