John Bartelstone is an architectural photographer and native New Yorker. He’s just published his first book, The Brooklyn Navy Yard, which is launching with a party at PowerHouse Books in Brooklyn on May 24. Read more about the exhibition in the latest issue of The Indypendent.

IRINA IVANOVA: How did you get into architectural photography?

JOHN BARTLESTONE: While I was still working as an architect, my boss started asking me to take pictures for internal use. At the time that I switched jobs, I was already involved in large format photography and had been shooting the Navy Yard for about a year.

II: How is your relationship with buildings different now (as a photographer) from when you were working as an architect?

JB: I worked for The Port Authority, which is an entity that is jointly owned by the states of New York and New Jersey. I worked primarily on projects at LaGuardia, the PATH System, JFK and the World Trade Center — that was from 1985 to 1995).

Of course, professionally, things have been upended. Where I used to become acquainted with a project in the program stage, I now come in when it’s nearly finished. I’m just a witness to architecture now and have much more time to appreciate it. But the same sensibilities are at work — you still have to know how to read the program and be able to let the building unfold for the viewer if not the user. 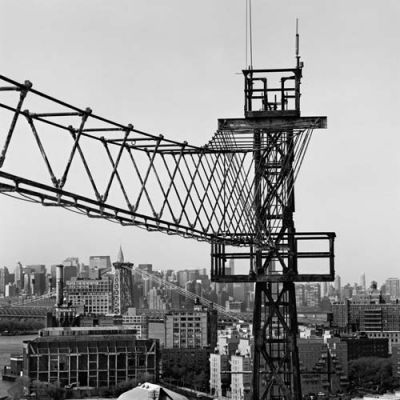 II: You’ve said that you prefer industrial spaces — do you mean to photograph, or in general? How come?

JB: In general. I love machines, especially when they are in isolation, or out of context: a pump house in the woods, an elevator motor room in a rooftop penthouse, a power substation on a residential street, a steam powered generator in a brick building. I love temples in which the holy of holies is the machine. But to have that you need masonry architecture surrounding the metal monster. Modern pre-fab sheds that shelter equipment do not fit this fetish well. The Navy Yard does: a steel ship in a brick dry dock, pump rooms galore, and great spaces everywhere. The Navy Yard itself is a machine out of context in the greater city, and that’s what really drew me to it.

II: How long had you been working on the Navy Yard project? And why did you pick that place, anyway?

JB: I went to the Navy Yard for 15 years. I did wander off and do other things during that time but it was always my primary interest. I’ve always loved infrastructure, so it did not take long for the Yard to pull me in. If you like what New York was, you can’t help but appreciate the Navy Yard. If you feel compelled to take pictures of industrial subjects, you don’t like to drive and you live in New York, the Yard’s the place to be. If I lived in Chicago, I’d be rowing a boat on the Calumet.

It’s funny, there’s so much talk today of making the waters around New York accessible, of letting people participate in activities at the water’s edge, but the Navy Yard is one of the last places left where the City and its waters work together and need each other, where the highest and best use, for once, is not parkland.

II: You’re a Manhattanite by birth. What drew you to Brooklyn? Are there any viable industrial spaces still left in Manhattan?

JB: There are no long-span industrial spaces in Manhattan, no heavy industry. Almost no industry at all. There are some great complexes that survived (Nabisco, Bell Labs), but they have been converted to other uses.

Manhattan has infrastructure, power plants, substations, the North River Treatment Plant, etc., but Brooklyn still has a working waterfront, some living industry and a few big industrial complexes such as the Army Terminal, Bush Terminal and the Navy Yard. It also still has its own working freight railroad that runs with traffic on the streets of Sunset Park. When I started at the Navy Yard in 1994, I could not have guessed that the other Brooklyn shipyard (in Red Hook) would be gone by the time I finished the project. And back then ships still supplied Domino Sugar in Williamsburg with cane.

I have to mention Phelps-Dodge, the best thing in Queens. It was a huge collection of buildings devoted solely to the task of turning 99 percent pure copper into 99.9 percent pure copper. It was the biggest factory in the city aside from the Navy Yard, and operated from the 1870s (at first producing industrial acids) until 1983.

II: Tell us about the equipment you use and your process.

JB: I took most of the pictures with a 4 x 5 camera and all except two with black and white film. But there is a good amount of medium format work in it too, and some 8 x 10 near the end when I started to use the larger format for some images. If the picture in the book is square, it was shot with a Rollei twin lens or later, a Hasselblad. I won’t really miss lugging a hundred pounds of gear on the F Train but it was the only way to do it.
I have a black and white darkroom in my apartment, but for the book I decided to scan the negatives. After that the files went to Ben Diep, owner of Colorspace Imaging here in New York. He gave them depth and substance that are very difficult to obtain with scanned negatives.

II: Why did you choose to do this project in black and white?

JB: Black and white can have a more sculptural look than color. Black and white allows one the luxury of a bit of temporal ambiguity. It leaves more to the imagination, and also reduces distractions like blue plastic tarps and orange fences that I really don’t like to see.

Black and white film has more detail per square inch than color, produces negatives that are a pleasure to see in their own right and can be processed at home. The last part is very important when you want to control density by customizing development times , and save money too. If I were starting this project today I would still print in black and white, but I might shoot it on both black and white and color negative film. And in case you were wondering, as long as they make film, I will never shoot something like this digitally.

Then there’s the fact that there is such a long tradition of shooting this kind of subject in monochrome. But, I have to say that when I see the work of photographers like Richard Pare, Andrew Moore and Tom Sullens, I’m tempted to explore color. In their work, color is never a distraction.

JB: I may have to leave town for the next one. Heavy industry still lurks out there and I need to shoot some.